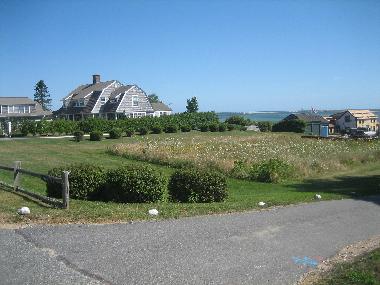 Chatham, Cape Cod, sits on the elbow of an arm of land that extends north into the Atlantic Ocean, thus its relationship to the sea is intimate.

In 1606, the first European laid eyes on what would later be known as Harding's Beach. French explorer, Samuel de Champlain was greeted by guileless natives who paddled their canoes out to greet him. Within weeks, conflict arose that resulted in a violent exhange, leaving some frenchmen, but more natives, dead. Champlain retreated and sailed away.

Fifty years later, an English settler, William Nickerson, set his heart on living in the area, but without the permission of the Plymouth Colony authorities, it took another 16 years for him to obtain his heart's desire. The place retained its Native American name, "Monomoit," for many years. A small farming village grew up around the Nickerson lands, and talk of a name change led to "Chatham," after a port town in England.

Chatham's original settlers farmed the land, raising corn, rye, wheat, and tobacco. Livestock consisted of oxen and sheep. By the 19th century, however, the waters off Cape Cod were the second busiest shipping lanes in the world after England's coasts.

By 1887, the railroad had reached Chatham. Before then, travel was possible only by boat, wagon, or stagecoach. With the advent of the railroad, the wealthy began to pour in and stake their claims on summer properties.

Today, Chatham's railroad and its shipping trade are no more, but the sea remains. Local commercial fishermen ply the waters off the coast, and tourists still make the worthy trek to the area.