This campsite is just great. The biggest prons are these:

Advice: you need shoes as it is pebble beach

See all 11 reviews
Payments made by partners impact the order of prices displayed. Room types may vary.
Nearby Hotels 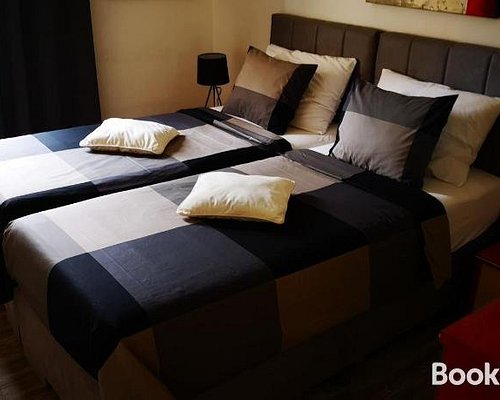 Quite a big campsite in Seline, at walking distance to sea and supermarket, a short drive away from Paklenica NP. Staff wasn't very friendly or welcoming. Although we had booked in advance via email, there wasn't a proper spot left when we arrived late in the afternoon. We had to set up our tent in a spot that seemed to be in the middle of a path and moved our stuff the next day to a proper spot, where we could also park our car. Toilet and shower facilities were fine.

This review is the subjective opinion of a TripAdvisor member and not of TripAdvisor LLC
Fernando S
Basel, Switzerland
33
Reviewed 21 July 2017
Very rude customer service

Rudest Croatian lady at the reception:

My girlfriend and I were relieved to have found such a nice camping site at the beach after a long day trip with our car along the coast. It was already afternoon when we arrived at this camp site. Wanting to set up our tent in this camp site we went to the reception office, where a young lad and an elderly woman were attending 2 camp site inhabitants. My girlfriend and I were waiting within the office, because it was air conditioned and shady. All of a sudden the elderly woman, having heard that we were speaking swiss german, told us in german to go "wait outside". Without hesitation we went outside and waited in the 33 degrees of burning sun for about 15 minutes until we were "not attended to". Meanwhile we were waiting, 2 other inhabitants of the camp site went inside the office and of course, they were attended to right away by the younger lad, who left the office with them, showing them something within the camp site. The elderly woman had a nice chat with the two other gentlemen as she left the office with them and then locked the door behind her as they went outside. She then briefly turned towards us, looked at us and then walked away ignoring us. She got on a bicycle and then left us standing in front of the rejection office and did not come back. We had no idea what we had done to deserve that sort of treatment. We tried to be friendly and complied with all the wishes. Not to mention, we felt like we were absolutely worthless, Any form of interaction would have been less rude, but we were not worth a word past: "Go outside and wait".

After that we got back in our car and sought out a friendlier place (which there are many more of along the coast we noticed). We easily forgive mistakes and are quite easy to please as guests, but this was just one of the rudest interactions we have ever had on any vacation, even outside of Croatia. We could not believe it!

Room tip: Try to get the rejection office to talk to you for starters.
Ask Fernando S about Campsite Autocamp Pisak
Thank Fernando S

This review is the subjective opinion of a TripAdvisor member and not of TripAdvisor LLC
elliec851
Shedfield, United Kingdom
125
Reviewed 10 June 2016 via mobile
Great location!

Stayed here for only one night, on our way back through the area on a climbing holiday. Location is perfect! 5 minute drive to the national park, and 10 minute walk from the town centre. The campsite is right on the beach, and offers sunny and shady pitches. Lots of vans and caravans...not sure much grass for tents (but didn't look too much!)
The facilities were large and really clean.
Free wifi.
Everyone was friendly and quiet!
Would stay again!