A disappointment - Review of Rungstedgaard

The room is very small, there is full view of your balcony AND ROOM from the neighboring rooms! So unless you draw the curtains tight no privacy at all possible ...
Here the design comes before the guests comfort.
Also no fridge but a hot water cooker.
The breakfast menu is nice, but expect to walk long distances to everything.

Trip type: Travelled solo
See all 311 reviews
Payments made by partners impact the order of prices displayed. Room types may vary.
Nearby Hotels 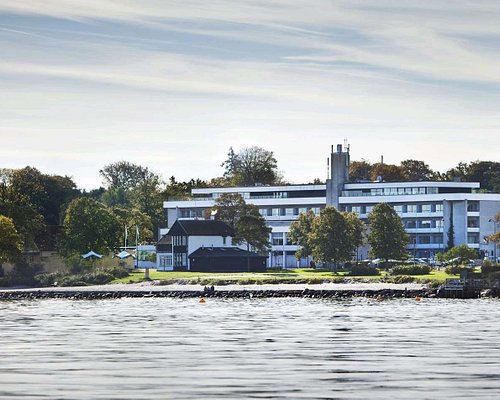 This review is the subjective opinion of a TripAdvisor member and not of TripAdvisor LLC
NatalieO349
London, United Kingdom
84
Reviewed 16 August 2020 via mobile
Very disappointing

The location and initial impression of the hotel is so good, lovely old house next door to Karen Blixen museum (which was my reason for staying), it’s beachfront & a short stroll to Rungsted harbour but the hotel rides on this and has not been updated in a long time! The communal areas are tired but ok, but the rooms are terrible! Booked for 2 adults & 2 teenagers and was offered a superior with sofabed for the children. I was told I was given a good price but now see I could have had 2 double rooms for the same price! The room was really hot and stuffy and there was no A/C, also no plugpoints to charge phones etc, we had to scramble under the desk to find a plugpoint! The shower room was old and badly appointed, the shower curtain which was hanging off the rail should have been a glass shower panel as when you showered the bathroom floor flooded.
I never write reviews as you usually get what you pay for but this place was a joke! totally overpriced and unfunctional. When you are travelling some things should be standard, to be able to refresh in a cool room, shower comfortably and charge your phones, this place delivered on none of these! It’s got the charm but sadly not the mod cons!

This review is the subjective opinion of a TripAdvisor member and not of TripAdvisor LLC
pille2
Munich, Germany
97109
Reviewed 3 August 2020
Ahhhhh..... wonderful place

This is a congress machine hotel with the ambience of an old country mansion. Little cosy rooms with everything you need. Wonderful brekfast. Acommodating people in the reception mostly trying to fullfill our every wish. A playful athmosphere with some surprise elements here and there. Calm, near the sea. We never tried the restaurant but it looked nice. Nearby there is a pier mooring sailboats that has a lot of good restaurants. In the village nearby there is a excellent sushi place called Nord. On the pier another, but a sleeker and more international concept, a chain called Sticks. And of course-a danish Kro nearby with traditional food of doubtful quality but with wonderful staff. All in all we loved beeing there these 5 days in july.

This review is the subjective opinion of a TripAdvisor member and not of TripAdvisor LLC
Nielsmj
Hollviken, Sweden
183
Reviewed 31 July 2020 via mobile
A very cozy stay

We chose Rungstedgård as we (2 adults and 1 child (11 years)) was going to play golf at The Scandinavian Golf Club and visit North Zealand.
Everyone we were in touch with from ordering until we checked out was very serviceminded, cozy and knew their tasks. Our room was large and nice. It was a good and affordable experience and a hotel that we will visit in the future. The hotel was well secured for the Covid-19 situation

Great friendly staff, lost amenities, fitness, excellent coffee, pastries. Rooms were very clean and the rental bikes were a nice touch. Free parking and close to everything. The gym was small but good equipment. Breakfast was good and the hotel was very quiet.