USD 319
View deal
Free cancellation until 24/06/21
Booking.comUSD 660
CheapTicketsUSD 660
eDreamsUSD 660
View all 17 deals
Prices are provided by our partners, and reflect total costs of the stay, including all taxes and fees known to our partners. Please see our partners for more details.
Payments made by partners impact the order of prices displayed. Room types may vary.
rjhatch81
London, United Kingdom
1211

Review of Velassaru Maldives
Reviewed 5 May 2016

We ate dinner at three of the five restaurants while were there. Teppanyaki, which is over the water was our favourite and the wagyu beef we had was the best steak we have ever eaten! Sand was also very nice for a great position right on the beach. Turquoise was great too as the prices were slightly cheaper here and the food still outstanding. Try the Maldivian curry here, its great. We didn’t try eating at Etesian as it looked a little stuffy for us, and not what we wanted from an island holiday. It was also fairly empty most of the times, maybe due to the higher prices. We also didn’t the buffet restaurant Vela as we couldn’t justify $75 per person for dinner. We simply don’t eat that much.

We stayed Bed and Breakfast and glad we did. To upgrade to all-inclusive it would have cost us £1095 per person for the week. Our bill at check out was about £1350 in total and that included 2 90 min massages, the dolphin discover cruise ($110 for 2) and parasailing ($195 for 2). Admittedly, we didn’t really eat lunch most days, I think we had lunch 3 times in the week. Buffet breakfast was great with the usual 5 star hotel breakfast on offer. One thing I would say was the the tea was far to strong, the tea in the rooms is better than what they serve at breakfast.

The Chill bar is lovely to watch the sunset with a beer or cocktail and serves great Tapas. The food in the resort really is outstanding. We did complimentary yoga which was great and quite challenging as well as the complimentary snorkelling tour of the house reef which was also great. The massages we had were also very good and we had access to the steam room and pool over the ocean which was lovely (see the photo). We also played tennis which was also complimentary.

Evening entertainment was just right for this type of holiday.

A lot of people comment on the fact that you can see Male and ‘Rubbish Island’ from the resort and that is certainly true, however we didn’t have a problem with that. Simply turn your head and problem solved. This was really a bonus being so close to Male as it was only a 20 min speed boat ride to and from. This makes it very good for parents with young children or babies as its very convenient.

All the staff were great, particularly the staff in both bars and also the chef at Teppanyaki from Nepal who’s name I have sadly forgotten. He is an outstanding chef and a lovely person. All the staff seem very happy to be working there, not sure if its the fact they are so close to Male, but none the less makes a real impression on you that they enjoy their jobs there.

I cannot recommend this place enough and if you book you won’t be sorry. We would definitely go back, but maybe next time we may try another island as there are so many to try, hopefully if we do try another we won’t wish we’d book to stay at Velassaru again.More

Show less
Room tip: Even the cheapest Deluxe bungalows are lovely
See all 2,258 reviews
Payments made by partners impact the order of prices displayed. Room types may vary.
Nearby Hotels 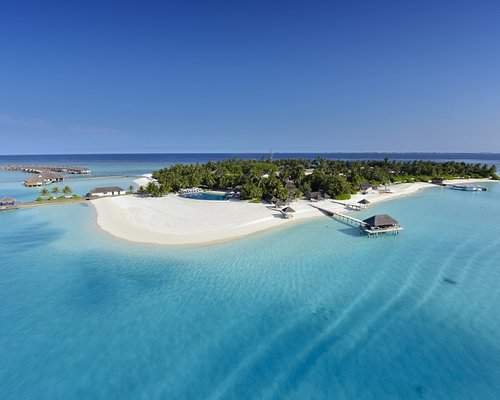 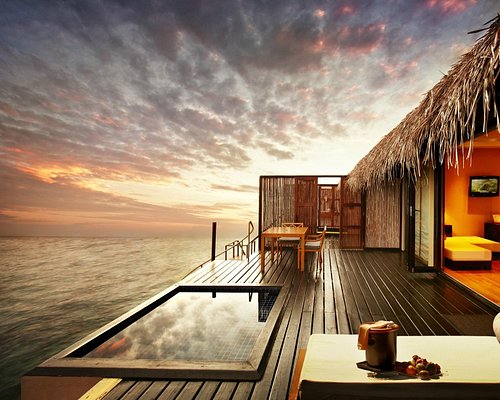 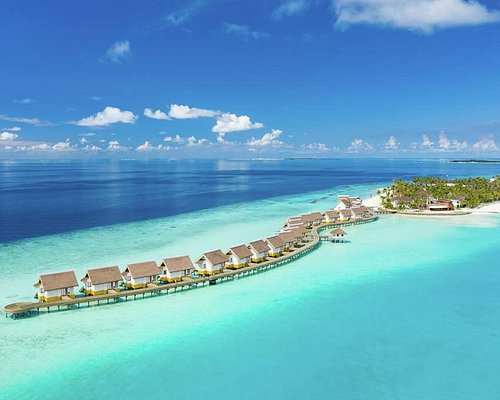 This review is the subjective opinion of a TripAdvisor member and not of TripAdvisor LLC
Traveldooder
Brooklyn, New York
2414
Reviewed 29 April 2016
Amazing resort, convenient location

Just came back from a 8 day stay at Velassaru. I would highly recommend this resort for people who seek a convenient place to stay close to Male airport. When you arrive they quickly transfer you by speed boat to the resort. The staff is amazing, usually 3 or 4 people around to help you wherever you turn. The SCUBA team was great, got in 2 dives when I was there. The food overall is excellent, but expensive. Be prepared to pay $200 for a nice dinner, or $30 for a small pizza by the pool. Cocktails are around $15. But going to the Maldives on a budget is probably a mistake, just assume you will spend an extra $350 a day on top of your room rate easy and get used to it. If you are seeking a budget vacation go to Mexico for example. The water around the resort is surreal and at times doesn't look "real" coming from the brown murky colors of the atlantic. Some days it looked like aqua crystal. Some people mentioned seeing Male and the "Rubbish Island" as a concern. I would say overall that is not a big deal, but for some could be a distraction if you are looking for complete remoteness away from civilization. I would try to stay at the front of the resort near the reception area, spa and immersion center if you can for convenience. The rooms on the back side are a bit far away (but probably a bit cheaper). If you can afford the over water bungalows by the SPA go for it, that seems like the best spot on the island. Definitely try the Teppanyaki restaurant, very tasty.

This review is the subjective opinion of a TripAdvisor member and not of TripAdvisor LLC
_shivaditya_banerjee
Mumbai, India
1612
Reviewed 26 April 2016
Tranquil blue waters!

We stayed in a water villa Mid april. It was super hot and humid; and as I could understand from few hotel staff, (the more candid ones!) that it is slowly turning this hot in Maldives almost all through the year.
Since I was taking my wife after we have had our son (5 months old), I had to make it special for her and I had requested for a flower decoration on the bed which the staff had readily agreed on phone. However, when we landed. I realized that the message found its way into an ordinary greeting card and some basic flower decoration was done on the bed.
The reviews we had read spoke highly about the staff, which was by and large experienced by us also, barring few, who could do better on their service orientation. Notably Mojo in the water sports centre 'Glide' is very patient, he hears you out, tries to suggest what we can do and what we cant. Also, though the photography section is managed by an outsourced vendor, a newly joined photographer named 'Aaiz' was just amazing. He took extra care to make our little kiddo smile through the photographs.
The food was good, buffet at Vela (especially breakfast) had decent options and the head chef at Vela was friendly and affable. We found the food at turquoise (ala carte) better however. Since we had booked a full board, we could not experience the other restaurants.
On reading reviews on Tripadvisor, we had booked for water villas not facing the bin island. The only downside to that is that for beginner snorkelers, there is absolutely no reef around and dead corals floating from the other side have made the under-water sands also pricky. The water however was pristine blue. Also one more downside for us was the walking time to the island from our water villa, as buggies were not allowed on the ramps leading to water villa. Specially while carrying a toddler in your arms (we didn't take our baby stroller), it is not only tiring but also dangerous, especially at night.
Buggies are too few and you need to wait really long for one to come your way.

We went for snorkeling to the nearby coral garden and for us beginners, it was a good experience. Since we were beginners, there was one person from the Glide centre holding our hand throughout, which was really good. We had taken this as a private paid snorkeling tour.
On day 1, when I had spoken to the lady at diving centre, she appeared rude and said that there were no seats for the complimentary snorkeling tour and for availing it, you should know snorkeling already. I was telling my wife, there has to be somewhere in this world, where we will do something for the first time. Maldives didn't seem to be that place!
Overall, the island is small and nice. If you go at the right time of the year, probably the sun would be more bearable.

This review is the subjective opinion of a TripAdvisor member and not of TripAdvisor LLC
CMSYD17
Sydney, Australia
134
Reviewed 25 April 2016
Absolutely loved it

We stayed in a beach villa with a pool with our baby and absolutely loved it. The beach villa was incredibly private, the garden around the villas is significant and well developed so you can easily forget that you even have neighbours. It was very quiet and the villa pool just added that extra element of luxury.

The staff were fantastic - went out of their way to help us with the baby, prepare food for her and also help sterilise her bottles.

Thank you for a wonderful stay.

This review is the subjective opinion of a TripAdvisor member and not of TripAdvisor LLC
pharryLondon
Lanzarote, Spain
2738
Reviewed 25 April 2016 via mobile
So beautiful

We stayed for 10 nights in March. Six in a beach villa and 4 in a water villa. This place is the most gorgeous place we have seen in the world so far!

We loved staying right on the beach, but we preferred the privacy of the water villa. There were just too many children on the beach and if a noisy family moves into the the next door villa it could impact your holiday.

The water villa had stunning views and we were glad we were not facing the rubbish island side. We were 403 which was perfect and not too far to walk!

We loved the chill bar for lunch. Excellent tapas.

For some reason they stop serving breakfast at 10am, which is the earliest We have come across in a hotel. We did make it one morning, but were promptly advised that we had 6 minutes for breakfast and then they starting clearing the buffet as we were trying to choose! Why can we not eat after 10am, as who wants to set an alarm for 9 on holiday? We therefore got room service every morning, which they do until 11am. More convenient but expensive and less choice.

For dinner we loved Sands, Etesian and Tepenyaki. The food was just excellent if pricey. We didn't go to the buffet as it looked hectic and we love to dine by the ocean. We would strongly suggest the Velassaru indulgence as it covers most food and drink. We regretted this as we ended up paying £2500 on food and drink!

The evening entertainment was generally very good. We enjoyed the DJ. Their full moon party doesn't happen on the night on the full moon, but on the closest Saturday. We thought it would be on our last night but it wasn't!

Mini bar choice was not great. We asked them to add some orange Juices, but were told this wasn't possible!

The people were lovely, the service perfect.