USD 73
View deal
Free cancellation until 18/12/21
Booking.comUSD 84
Hotels.comUSD 84
eDreamsUSD 84
View all 16 deals
Prices are provided by our partners for one room, with variable occupancy rules as provided by the property, and reflect total costs of the stay, including all taxes and fees known to our partners. Please see our partners for more details.
Payments made by partners impact the order of prices displayed. Room types may vary.
r0amingtraveller
Evesham, United Kingdom
6390

Second visit did not disappoint

We discovered that evening that some staff cannot communicate very well in English. On trying to order via telephone, I eventually gave up as it made sense to go down to the cafe to make clear exactly what we wanted from the room service menu. Their wine list was not in the room but was available when I visited the cafe. Service was swift...perhaps my piece of salmon was a little small... But I fortunately wasn't hugely hungry anyway.

Breakfast had changed since our last stay. It was now completely buffet style, which admittedly I was a touch disappointed with as a was really looking forward to pancakes with maple syrup, which were no longer an option and neither was French toast.... Perhaps these along with a greater continental assortment of pastries could be something to add to their breakfast choices.

We booked our shuttle limo to the airport and were arrived at BKK very promptly. Perhaps they could take your flight number on arrival... As we were not dropped at the correct areas in departures and had to walk some distance. This was something they did last year, but not this year....

Once again thank you summit windmill for your hospitality and very pleasant stay...we will be back again next year! :-)More

Show less
See all 336 reviews
Payments made by partners impact the order of prices displayed. Room types may vary.
Nearby Hotels 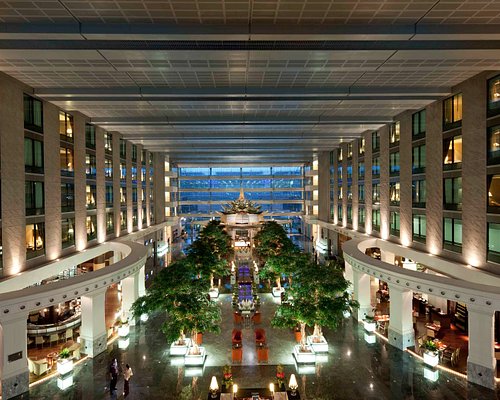 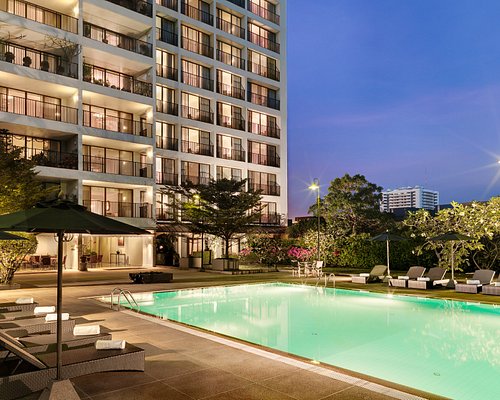 My family and I stayed at the Summit Windmill for two nights primarily because of its close location to the airport and the self catering facilities. We arrived following a four hour train journey from Hua Hin. We received a warm welcome and were efficiently checked in by the manager and shown to our room.
We stayed in a one bedroom room in the residence and were pleasantly surprised at its'
spaciousness and beautiful finish. The room had a fully fitted kitchen including coffee maker, full sized fridge and washing machine/dryer. There was a dining table, 2 flat screen TVs and DVD player ( you are able to borrow films from reception), separate dressing room, bedroom and huge bathroom with separate bath and shower.
Our room overlooked the beautiful golf course and we spent some time on the balcony watching the golfers.
We had lunch at the Course Cafe - the menu was ok, both Thai and Western dishes and the prices reasonable. I would recommend that a few menu items aimed at children were added.
My husband played golf one morning which he enjoyed and found the staff more than helpful.
There is a mini mart at the hotel - but its product range is limited. The nearby supermarket is useful for buying fruit, milk etc.
The hotel is located about 10 mins taxi ride away from Mega Bangna (a huge shopping mall with food court, banks etc) and a taxi ride to Silom in central Bangkok costs around 400 baht. Taxis take around 15 mins to arrive so order one before coming down to reception as it is not possible to hail them because the hotel is set back from the main road.
We took the hotel bus to the airport, very comfortable and efficient.
I would definitely return to this hotel if I arrived to Thailand on a late night flight or had an early morning flight.

This review is the subjective opinion of a Tripadvisor member and not of TripAdvisor LLC.
LANDL55
Melbourne
4355
Reviewed 25 July 2012
Welcoming & Wonderful

From pick-up to drop-off our stay was absolutely perfect. Complimentary airport transfers must be pre-arranged with Summit. Our receptionist Bum (pronounced Boom) was very professional and welcoming as was the driver who picked us up.
We appreciated Bum's thoughtfulness in providing a tour around the vast golf course and the breakfast baskets to take along because of our extremely early flight out.
Our immaculate two bedroom apartment each had it's own fabulous bathroom, modern loungeroom with kitchenette, free wifi and long balcony with stunning views overlooking
hole No. 1.
Dinner was Al fresco at Palm Breeze Restaurant with fabulous views yet again, good Thai/International food and service to match.
The swimming pool was wonderful also with views across the greens.
We chose Summit because of the close proximity to the airport and our only disappointment was that we only booked one night.
We would definitely recommend staying at this exceptional place.

This review is the subjective opinion of a Tripadvisor member and not of TripAdvisor LLC.
anastasiaEngland
Oxfordshire, United Kingdom
202156
Reviewed 31 May 2012
What a surprise, absolutley lovely

Booked this hotel at the last minute, as we were not prepared to pay 128 pounds for the novotel for one night. We needed something relatively near the airport, and this hotel offered a complimentary shuttle service to and from the airport. I e-mailed them with the arrival information and confirmed that somebody was going to pick us up. When we arrived nobody was there, so we waited a bit and then called. They said somebody was on its way, waited a bit longer but nobody appeared, finally the lady from airport information called the hotel and then called the driver on the mobile and finally he appeared. So, 20 minutes later we were on our way in a nice air conditioned van with two bottles of cold water and a very polite driver. When we arrived at the hotel, in a very upmarket area, we were taken aback by how beautiful the golf course was. We checked in and taken to our room and it was beautiful, a small flat, with two bedrooms, two bathrooms (that is so convenient) and a balcony with a magnificent view of the golf course. The hotel has a small pool, convenient enough for a quick dip, and a very nice breakfast, that was included in the price. If you are a golfer and have some time to spare you could have a game, the course is lit till midnight. Nice club house for supper or lunch. I could have stayed a couple of days and gone into Bangkok city centre from there. Very happy with the choice. and sad to leave. A really perfect way to finish a holiday

This review is the subjective opinion of a Tripadvisor member and not of TripAdvisor LLC.
Manuel S
Community of Madrid, Spain
8360
Reviewed 9 May 2012
WOW! A must...

One night at these luxurious apartments was all it took. The apartments are beautifully decorated and in impeccable order. Very, very comfortable and large. It has everything you need to make your stay very pleasant. Only 15 minutes from the airport and with a complimentary shuttle service. If you have time, you can get in a round of golf. The service is exemplary and the food is also very good. I will definitely be coming back here on one of my many Thailand visits.

This review is the subjective opinion of a Tripadvisor member and not of TripAdvisor LLC.
Dogz
United Kingdom
2742
Reviewed 24 April 2012
Truly Amazing

An outstanding place to stay. Stayed here with my family for one night prior to flying back to the UK. We had a 2 bedroom apartment, breakfast and transfers to and from the airport included in the price which was comparable if not cheaper than the Amari & Great Western. The apartment was superb, each bedroom had its own beautiful ensuite, there was a lovely balcony spanning the bedroom and sitting room overlooking the manicured golf course. Three flat screen TV's, full size dining table. Fully fitted kitchen with appliances. Wonderful quiet location.
We had an evening meal in the "cafe" restaurant, my Thai wife had authentic spicy Thai dishes and the children and i enjoyed western fare. The food was lovely and very reasonably priced, breakfast was good with choices for all tastes.
I forgot to inform the desk of our transfer time back to the airport, Berne the manager collected our baggage and drove us personally to the airport, a 10 minute drive away ! The apartment was so immaculate i asked Berne if we were the first occupants, we weren't... that was the standard. I will most definitely return here again should the occasion arise.

This review is the subjective opinion of a Tripadvisor member and not of TripAdvisor LLC.
View more reviews
PreviousNext
1…404142…