Charming - a lovely place to stay - Review of The Racecourse Inn

Destinia.com
StayForLong
Travelocity
View all 13 deals
Prices are provided by our partners, and reflect total costs of the stay, including all taxes and fees known to our partners. Please see our partners for more details.
Payments made by partners impact the order of prices displayed. Room types may vary.
Heather L
Canberra,australia,
54

Charming - a lovely place to stay

We enjoyed a great evening at the Race Course Inn, Annabel and Richard were warm and friendly hosts. The Inn itself was delightful - rooms great and the food presented and cooked with great care. Conveniently close to Launceston Airport and proved a great spot to start our Tassie holidayMore

Dear Heather,
Thank you for your lovely review of The Racecourse Inn. It was a pleasure having you and your family to stay, and I'm so pleased that you enjoyed the dinner and your birthday. I hope that we'll see you again in Longford.

Report response as inappropriateThank you. We appreciate your input.
This response is the subjective opinion of the management representative and not of TripAdvisor LLC
See all 85 reviews
Payments made by partners impact the order of prices displayed. Room types may vary.
Nearby Hotels 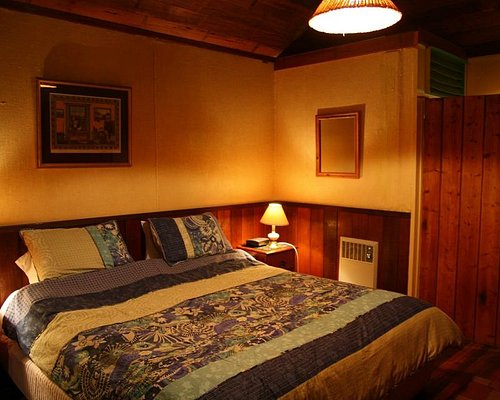 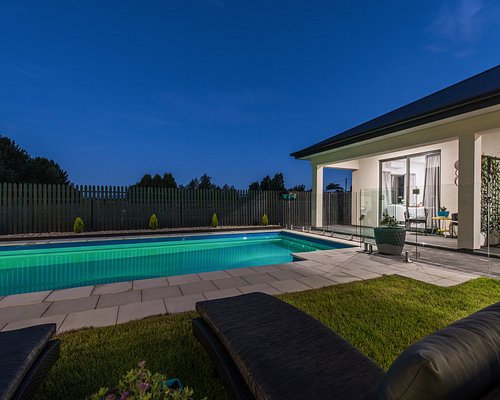 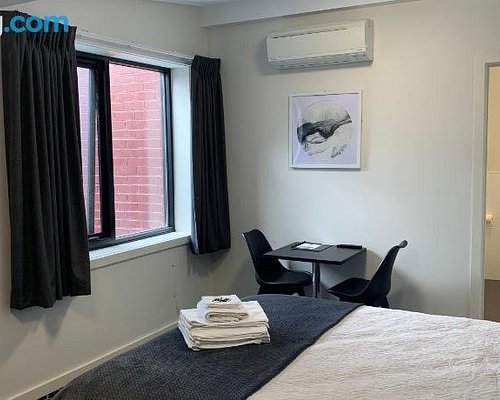 We stayed at the Racecourse Inn in Longford (near Launceston) for three nights in June. It is a beautiful old Georgian house with period furniture. The inn is a good launch pad to visit nearby Brickendon (a working farm established in colonial times and originally run with convict labour) and historic Woolmers, which is a world heritage site similar to Brickendon, with a wonderful café. We also visited the Evandale Markets, which are held on Sunday mornings, which has bric-a-brac alongside the freshest vegetables you're ever likely to see. There is artwork displayed on the walls of the inn by our host Annabelle, who has great artistic talent, and also some artwork from the local gallery in Longford depicting the fascinating Tarkine region. We slept in the Red Room, which is a medium-to-large room and it was perfect for us. It was a cold stretch (there was frost for most of the day and the thermometer got down to -5°C overnight) but we were toasty warm because the inn has a fireplace in the dining room and heating throughout. Our room had reverse cycle air conditioning, and there were spare blankets and a doona in the cupboard, if you need it.

Every morning we were treated to a fantastic breakfast. The hosts Annabelle and Richard put out a continental breakfast with yoghurt, cereals, three different kinds of stewed fruits (a changing palette, but for example, raspberries from the raspberry farm at the end of the road, apples from their own garden in the summer months, plus their own rhubarb), home-made jams and if you so desire, a wonderful full cooked breakfast prepared by Richard, with very yellow Racecourse Inn eggs. You can even meet the chickens and get to know them by name!

The hosts also treated us to a glass of wine in the evening when we arrived and it was a pleasure to engage with two very interesting individuals and relax by the fireside. On one evening we also had the opportunity to meet the other guests and mingle and that was very enjoyable because everyone has a different tourist experience.

Although we were there for three nights I don't feel I have explored enough of the region yet and so we will definitely be back to visit the Racecourse Inn again.

Room tip: We saw the different rooms and they were all charming.
Ask lavandula174 about The Racecourse Inn
Thank lavandula174

Dear Lavandula174,
Thank you for your lovely review of your stay at The Racecourse Inn. It was an absolute pleasure having you to stay and I'm so pleased that you'd like to return to explore more of Tasmania. I hope we'll see you here again soon.

Report response as inappropriateThank you. We appreciate your input.
This response is the subjective opinion of the management representative and not of TripAdvisor LLC
stevekyne
New Taipei, Taiwan
628359
Reviewed 14 June 2015
4½ stars. (Let's not quibble about Tripadvisor's lack of half-stars. Really, let's not.)

Arriving at The Racecourse Inn admittedly gave rise to a slight cause for concern. It was not late, but it was already dark, and so I drove into the wrong drive (my fault for not pausing to look at the signage provided) and then I found the correct car park and nearly went to the wrong door (again, the signage that I didn’t see at that point was quite noticeable the next day), and when I got to the entrance, there was no light to welcome me. I knocked several times, and no answer. To the owner’s credit they had put a mobile number on the door in the case of no answer, but without a light it was a juggle to shine my phone onto the number and then key the number in. But, we got there in the end.

The room was nice, but the bathroom was a closet with nowhere to put a toiletries bag, save for on the dunny seat. The downsides to the room were a rather noisy heater, and the lack of a waste bin (there was a wee one beside the toilet). On the credit side of the ledger, there was a generous jar of biscuits with the tea and coffee set. I didn’t avail myself of these, but what a delightful touch. As was the decanter of port and glasses. Really nice additions to the room. The bed was big and comfortable, and the pull-cord light switches added to the charm.

The breakfast the next morning consisted of a table of the usual continental brekky items (including stewed rhubarb - yum!) and a plate of cooked goodness which you ordered when you arrived. The plate was laden and the cooking could not be faulted.

So, why should you stay at The Racecourse Inn? It is a beautiful building. There are issues but they’re pretty minor in the scheme of things. But above all, you want to stay somewhere that’s welcoming. Annabelle and Richard are simply two of the loveliest people you are ever likely to meet in your travels. I arrived back at the inn with takeaway from the local Chinese eatery (The Chinese Big Wok – well worth a look), and they set a table for me beside them (as they were eating) and invited me to eat with them. I felt guilty that I was interrupting, but they could not have been more welcoming. That was but only one example. Really, these two people should be cloned so that the rest of the hospitality industry in Tassie can get some of their own.

Thanks for your constructive comments about the room that you stayed in. We have replaced the errant bin and will service the heater to ensure that it's quieter.

It was a pleasure to have you to stay and lovely to chat to you over dinner and I hope that you'll visit Longford again.

Report response as inappropriateThank you. We appreciate your input.
This response is the subjective opinion of the management representative and not of TripAdvisor LLC
volant5
Hobart
3315
Reviewed 19 May 2015
Charming, historic and highly recommended

We stayed at the Racecourse Inn, primarily because of proximity to AgFest and we also wanted an historical B & B experience. This lovely B & B was an old coaching inn, kept true to character and with a wonderful history behind it, even a ghost! The rooms was gorgeous with a beautiful queen sized bed, antique furniture and heavy drapes and well appointed with an ensuite, TV and tea making facilities. Our hosts Richard and Annabel had only taken oven five weeks previously but have quickly developed a passion for the old house and the surrounding countryside. They are extremely hospitable, interesting conversationalists and good cooks. We opted to have dinner there as it was very reasonably priced. We relaxed on the comfy leather sofas in front of the fire with a drink and then dinner was served - silver service all the way. The next day we went to the Evandale markets which are only five minutes away and then explored Woolmers Estate which made a lovely day. We highly recommend the Racecourse Inn for a weekend or a week away. It is close to Launceston or a very easy drive from Hobart and there is plenty to do and see in the area.

Room tip: We stayed in the standard queen room which was lovely so I can only imagine that all the rooms would be wonderful.
Ask volant5 about The Racecourse Inn
1  Thank volant5

Dear Kathryn, thank you for your lovely review of The Racecourse Inn. It was a pleasure to meet you both and I am so pleased that you enjoyed your stay. We hope that you might visit again.

Report response as inappropriateThank you. We appreciate your input.
This response is the subjective opinion of the management representative and not of TripAdvisor LLC
thebiga57
NSW
6734
Reviewed 29 November 2014
An unexpected pleasure

We spent 2 nights here recently. We were well rewarded. Comfortable period room in a restored sympathetically repaired and restored 1850s inn, blending the old with the new(er) Welcoming and helpful hosts, Robyn and Bill. Breakfast was the real treat. House made yoghurt with house grown and made berry compote. House made jams change daily and you could stay a week without trying the same one twice. A good base to explore Longford and surrounds, we used it for the whole Tamar Valley.

This review is the subjective opinion of a Tripadvisor member and not of TripAdvisor LLC.
Peter H
Dunsborough
21
Reviewed 21 November 2013
Holiday stay

Lovely part of Tassie, passing thru. Everything seemed to be too much trouble. The cooked breakfast did not happen as we were 10 minutes late and the only guests .....Really! Maybe the hosts were tired or something, bit hard to know.

Report response as inappropriateThank you. We appreciate your input.
This response is the subjective opinion of the management representative and not of TripAdvisor LLC
View more reviews
PreviousNext
1…131415
<script type='text/javascript' crossorigin='anonymous' async onerror='__scriptLoadError(this,true);' src='https://static.tacdn.com/assets/assets/X3dUVA.bd5f4989.es5.js' data-rup