USD 42
View deal
Expedia.com
Hotels.com
Travelocity
View all 11 deals
Prices are provided by our partners, and reflect total costs of the stay, including all taxes and fees known to our partners. Please see our partners for more details.
Payments made by partners impact the order of prices displayed. Room types may vary.
Jimbob2705
Plymouth, United Kingdom
6530

This hotel was a cheap stop off for a night halfway through an 8 hour drive, friendly staff at check in and out, clean and comfortable room. It did exactly what we needed, and for £25 it was a bargain. Not sure what others expect from a service station budget hotel but it was great for us.

Trip type: Travelled as a couple
See all 361 reviews
Payments made by partners impact the order of prices displayed. Room types may vary.
Nearby Hotels 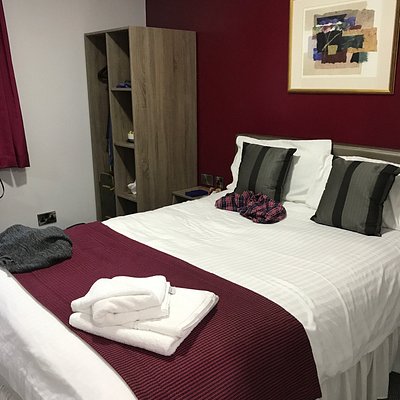 Staff was very friendly on arrival and answered all questions that was asked, hotel room was very clean and fresh, everything was stocked up in the hotel room, fresh bedding and the temperature in the room was brilliant- only downfall was the breakfast box, wasn’t very nice and not for that price, other than that very good experience

Review collected in partnership with Travelodge
This business uses tools provided by Tripadvisor (or one of its official Review Collection Partners) to encourage and collect guest reviews, including this one.
Ask megantucker24 about Travelodge Stafford M6
Thank megantucker24

This review is the subjective opinion of a TripAdvisor member and not of TripAdvisor LLC
Kirsty S
Buckie, United Kingdom
5
Reviewed 3 September 2020 via mobile
Infested room

Would not stay here again. Room was infested with moths and grasshoppers. We kept our room window closed during 26 degree heat to avoid more bugs coming in but they still managed to get in. Bed was very uncomfortable.

This review is the subjective opinion of a TripAdvisor member and not of TripAdvisor LLC
895iaina
Maryport, United Kingdom
4
Reviewed 14 August 2020 via mobile
One of the worst.

I recently spent the night at this hotel as an overnight stop off with my wife and son.
We usually book rooms with their main competitor, but as it was just 1 night and as it was handy at a service station it seemed ideal. I have stopped in a few Traveloddges, some good and some not. Unfortunately this was one of the worst. The room smelt strongly of damp, fixtures and fittings were grubby. The carpet felt damp and to top it off their was no hot water. The day we checked in I had drove up from Devon in the midst of a heat wave. The temperature was in the 30s.
By the time we got to the hotel the weather was changing and shortly we were in the middle of a long heavy thunder storm. We then realised there was no hot water. I went to reception and was told the hotel used the service stations boiler and they had had problems before. I was told it would be sorted within half an hour. I waited a good hour and tried the tap again, still no hot water. I went back to reception and was told they were trying to get the boiler repaired but if it could not be repaired then we would be offered alternative accommodation, but that she would let me know. I returned to my room and told my wife we might have to move, but as she pointed out we were in the middle of a thunder storm with Very heavy continuous rain, we have a 7 year old boy and she didn't think it was safe to travel in the weather conditions. We waited for information from reception which never came and my son just wanted to go to sleep. The beds were very uncomfortable. To sum up, From now on I never stay at a Traveloddge again.

This review is the subjective opinion of a TripAdvisor member and not of TripAdvisor LLC
783travelodge
Derby, United Kingdom
1
Reviewed 1 March 2020
Warm comfortable room without luxury

Wasn't expecting too much as some sites can be less than acceptable. BUT:

Was greeted in a friendly and efficient manner.

Found room easily and heating was already on which was nice for a frosty night.

Room was made up for 4 people but that was ok.

TV worked fine and had plenty of Freeview channels.

Review collected in partnership with Travelodge
This business uses tools provided by Tripadvisor (or one of its official Review Collection Partners) to encourage and collect guest reviews, including this one.
Ask 783travelodge about Travelodge Stafford M6
Thank 783travelodge

This review is the subjective opinion of a TripAdvisor member and not of TripAdvisor LLC
sjh0wlett
Exeter, United Kingdom
1
Reviewed 1 March 2020
Travelodge Stafford M6

I stay at a large number of Travelodges and similar hotels for work. The team at this TL were very welcoming and helpful.They were all obvious animal lovers too as they were caring for a stray tabby cat. Will definately stay here again.

Review collected in partnership with Travelodge
This business uses tools provided by Tripadvisor (or one of its official Review Collection Partners) to encourage and collect guest reviews, including this one.
Ask sjh0wlett about Travelodge Stafford M6
Thank sjh0wlett