Ocean Inn and Suites
2 people are viewing this hotel
Lock in great prices from these sites
USD 226
View deal
Expedia.comUSD 226
Hotels.comUSD 226
FindHotelUSD 226
Trip.comUSD 226
TravelocityUSD 226
CheapTicketsUSD 226
View all 15 deals
Prices are provided by our partners, and reflect total costs of the stay, including all taxes and fees known to our partners. Please see our partners for more details.
Payments made by partners impact the order of prices displayed. Room types may vary.
368garyo
Stuart, Florida
1

Not quite sure why all the negative reviews of this establishment were submitted. We found the hotel to be super clean and very accommodating for the week we had stayed there during the off season. Tom, the front desk pro, made our stay here all the more pleasant with his knowledge of the island and his willingness to meet our every need. Because of Covid, the cleaning crew wasn't able to do a daily thorough cleaning of our room. But they sure were very helpful in refreshing our towels, bed linen and any other items we needed during our stay.
For those who have complained about the musty odor, having lived on the Island myself for two years, the smell of the water (especially the toilet water) as well as being downwind of a nearby paper pulp mill, such odors tend to permeate throughout buildings. This hotel has taken every step to minimize such unpleasantries, and I commend the staff for their actions.
All in all, we had a great stay at Ocean Inn and wouldn't hesitate to spend multiple days there again.More

Show less
See all 379 reviews
Payments made by partners impact the order of prices displayed. Room types may vary.
Nearby Hotels 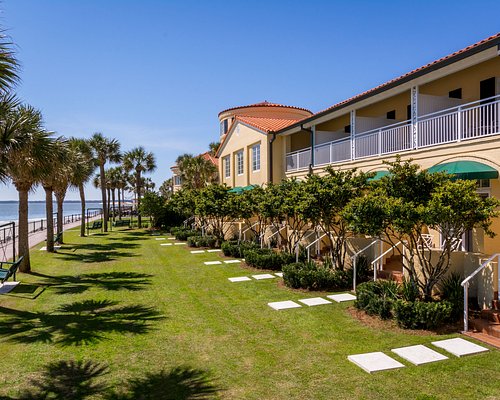 The location has such potential and you’d think that this would be an easy choice for a couples weekend in St. Simons. Not only is the place a good 20+ years past due for some renovations, but it’s also obvious that they’re skimping one anything that would help to make up for the dated decor. The shampoo, conditioner, etc. are in wall pumps that have mildew around the edges. The room smelled of mildew and mild and tit was oddly damp/humid in the room. When we woke up in the morning there was even condensation on everything. We stayed only one night of our 2 night reservation and were still waiting on a call from management to discuss a refund of our 2nd night. The room was clean, but the blankets on the bed were stained and there were waited stains/spots on the walls and even the curtains. Call me when this place has a new owner and management.

We have stayed in hotels all over the world and never seen a hotel this bad. We paid $377 for two rooms one night and it wasn’t worth half that. There was an old rusted out dirty fridge, and microwave in the room. The bathroom had physical mold you could see all over the soap and shampoo dispensers, the bathroom itself didn’t have a sink and hasn’t been updated since the 80’s. It honestly didn’t feel clean enough to shower in. The decor is terrible. Old, dried flowers and prints not changed for forty years. My daughter got a bad reaction and her face swelled from sleeping on the bed and to top it all off in the morning I bent down to get one of the kids toys and saw a piece of elastic (which I’ve only seen used to take a blood test) laying on the floor under the bed. Completely gross! We left and asked for the manager to call but haven’t heard back and it’s been three days.

Trip type: Travelled with family
Ask Julie B about Ocean Inn and Suites
2  Thank Julie B

This review is the subjective opinion of a TripAdvisor member and not of TripAdvisor LLC
2travelingmore2
Charlotte, North Carolina
36
Reviewed 7 August 2020
Do NOT ruin your vacation by staying here!!

One star is being generous.
I am a healthcare provider on a covid team and was in search of much needed rest. I had concerns after reading the reviews here but I was reassured when I made the reservations and was told that we would receive "as much or as little" maid service as we felt comfortable. We gave Ocean Inn and Suites a try. What a mistake!!
On our arrival our room temperature was 85 degrees. We were told to wait because they had just turned on the air conditioning 30 min prior to our arrival (odd in itself since it was 100 degrees outside). It remained 85. We called down again and were told to wait for maintenance. Maintenance came and told us to wait so he could replace a battery in the thermostat. The room remained 85. Bill at the desk told us to "wait" so he could work some things out and call us back. When he didn't call, we went to the lobby to find he had gone home for the day! We were told and A/C repairman would come and we "waited" some more. Eventually the A/C was repaired and we were told not to adjust it up or down during our stay..... AND a whole afternoon had been wasted!
Next the soap dispenser fell off the wall and broke everywhere. The hotel does not use sample sizes or bar soaps so we were provided the "refill" bottles which were soap, shampoo and conditioner from your local DOLLAR TREE. Not what you expect from a "boutique hotel".
Upon entering our bedroom, we found the light to be burned out and the only light was one dim one barely lit in the ceiling and a lamp in the corner.
The safe was located in the bathroom floor and did not work until later repaired.
We were able to look at a moldly tub drain stopper on the bathtub shelf each time we took a shower.
On making the reservation, I requested five towels each day as we were paying for extra guests and I also requested linens for the fold-out sofa. On day one, we had two towels instead of five and no linens for the sofa.
On the first morning, we requested full maid service and received it along with needed repairs. On the second and following mornings, we were told that they suddenly did not perform maid services due to covid (which was contrary to what we were told on the phone when making our reservation). Our new towels were left outside in the hall on the floor. The trash cans were still in the room overflowing with trash. The dirty towels were piled in the bathroom where we had left them. The floor was covered in sand. Upon requesting the floor at least be swept, we were handed a broom to do it ourselves (broom sharing also shares the covid virus...fyi). Ben, the assistant manager came to our room on day three and told us that he would be our "personal housekeeper and concierge" for the remainder of our stay. Needless to say we NEVER saw him again.
Twice during our stay, we ran out of toilet paper and had to send a family member down to the lobby for emergency toilet paper!
While sitting on the toilet one rainy day, I noticed my clothes getting wet from above where rain was dripping from the ceiling!
When requesting pool towels (we were the only people in the pool) we were told that they had not done laundry and none were available. The bath towels were horribly rough and paper thin (does DOLLAR TREE make bath towels?). My son developed a rash from using them.
Our bedsheets were yellowed so I only hope they were clean since they were not changed in five nights. The bed itself was average and not the quality of most hotels.
Continental breakfast is not currently served.
We had long since stopped reporting needed repairs to the desk as it was for null. A few side notes that we also never reported: sink did not drain, toilet handle broke, the refrigerator door shelves had been removed and could not hold drinks, the balcony door was broken and my husband had to pull with all his force to open it, the clock showed the wrong time for six days.
This place claims to be a boutique hotel but it has a long way to go to actually become one.
PLEASE DO NOT RUIN YOUR VACATION BY STAYING HERE.
I have spoken to management several times in person and made attempts by phone to speak with them since our departure. We were advised at checkout to call back to have an adjustment made to our bill for our inconveniences (aka misery). Once my call was finally returned, I was told that the owner and manager feel that they did everything they could to fix the complaints as they arose (a/c, safe, light bulb and soap dispenser)...problems that should not exist in the first place. They were unwilling to listen to the additional concerns and hung the phone up on me. Before our departure, we were credited $84 of a $1711 bill.
This is the worst hotel experience that I have ever had. It was a waste of time and money and a big disappointment to my entire family.
Every staff member continually tried to explain everything away as covid related but dilapidated facilities, repeated lies and poor service have NOTHING to do with covid 19.

This review is the subjective opinion of a TripAdvisor member and not of TripAdvisor LLC
craig c
2
Reviewed 4 August 2020
stay here for the location, you can walk to most of what you need

The best part is the location. I would recommend staying here for that alone, especially if this is your first time in St. Simons. Parking was good. There were several problems immediately after checking in and some of them got clearer up (dripping facet, safe already locked, microwave did not work). It is clear they are in transition (fleece blanket as cover). We paid for an upgrade which was not needed unless you have a family and need the space. The room was very clean. You could get what you needed from cleaning staff when you saw them in the hall (all the people were nice) but outside of that, no cleaning of room. If you tracked in sand, you had to live with it for the duration of your stay. Wifi good. No breakfast, but refrigerator and microwave in room.

This review is the subjective opinion of a TripAdvisor member and not of TripAdvisor LLC
bwrftrt1
Richmond Hill, Georgia
246
Reviewed 27 June 2020
GREAT LITTLE HOTEL

Have stay at this place a few times. Always a perfect visit. I highly recommend this hotel over others in the area and I look forward to future vists. This will be my 1st choice on St. Simons Island, GA