USD 12
View deal
Free cancellation until 05/02/22
Hotels.comUSD 28
TravelocityUSD 28
Agoda.comUSD 28
View all 14 deals
Prices are provided by our partners, and reflect total costs of the stay, including all taxes and fees known to our partners. Please see our partners for more details.
Payments made by partners impact the order of prices displayed. Room types may vary.
Jacglan9
Singapore, Singapore
3729

The breakfast spread is good. The reception area is big and nice. Lotte Grosir is just next to the hotel and there is also a 24hr pharmacy opp the hotel. There is a massage parlour and Chinese restaurant in the hotel.

Trip type: Travelled with family
See all 634 reviews
Payments made by partners impact the order of prices displayed. Room types may vary.
Nearby Hotels 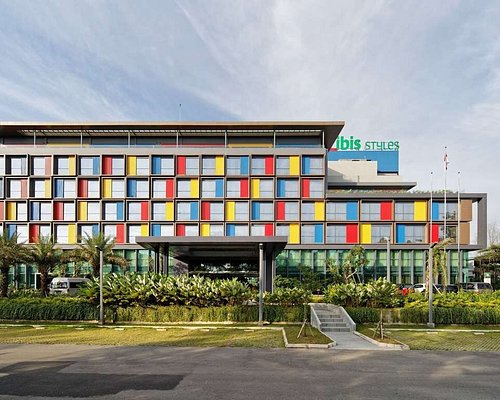 Poor maintenance of the hotel room. Leakage in toilet and floor is always wet. The bed frame with wheels are shaky and quilt cover is smelly. It’s pretty dirty and you can see it with naked eyes. It is yellowish blanket and yellowish bath towel. However wifi is good in the hotel room.

This review is the subjective opinion of a Tripadvisor member and not of TripAdvisor LLC.
RenaRowena
1
Reviewed 13 January 2020
One of the worst short family vacation stay ever!! Creepy! And service sucks big time.

I am the sort who would not care much to leave feedback or complaint of my encounters. But i really have to share this bad experience with all. This was not the first my family and myself stayed in this hotel for our short vacation. Our first experience were decent plus the price was pretty reasonable for family stay since we came in a group of 20 pax. Hence, we booked this hotel again for 3d2n stay. However, this time there were lots of hiccups. We had booked 8 rooms. All rooms were at level 3. When we came out from the lift, the cigarette smell were really strong and when we walked down along the corridor to our rooms, there was a strong stench. More like sewage smell. We ignored it since it is only at the corridor.

Then, we went in to our rooms. But to our astonishment, the rooms were pretty run down as compared to our previous visit (1 year ago). These were the issues we encountered:

First day (arrival - check in)
1) Lipstick stain on the comforter in my parents room. So we called the housekeeping to change the bed cover set.
2) The foul smell was pretty strong in my room. But i can still live with it so i ignored it as to not spoil the holiday mood. The windows were so dirty. You can clearly see the layer of mold outside the window. Seems like they never cleaned it at all and also, it seems like that room was not occupied for a long time. The foul smell was strongest in the bathroom. The remote was not working and there were no programme channels to watch. Had to call the room service for assistance. They only resolved the channels issue but the remote still not working. I cant be bothered to call for assistance again since i can still live with it.
3) 2 rooms with faulty locks. Not able to open the doors. Had to call for assistance from the engineer (thats what the hotel staff address it as) to open the door. They came up with an ipad to open up the room. Apparently, they had to reset the door locks for it to open. They said one door is working ok but the other had battery issue and had promised to change it the next day. But no. They did not change. The issue persisted for the rest of our stay.

First night
1) came back to hotel late at night. The same door still not able to open. We had to call the engineer up again. Again, he came up with an ipad to open the door. We still didnt complain anything but we start to nag a little.
2) the foul smell still lingers along the corridor and gave us that spooky feeling whenever we walked along the huge lift foyer and long corridor. And also in my room.

Second night
1) same thing again. The door still cannot open (Room number: 390). I had to call the concierge for assistance. We waited 15 mins. No one came up. Hence, my granduncle went down to check. They gave him a change of keycard. He came up to try again. But failed. We called again. Still no one came up. We have to go down again and complaint. The security guard came up and used his master key to open the door. Failed again. Then, he called for the engineer on duty to come up. He came (another person) with the ipad and reset the lock again. In total we waited for almost an hour just to get into the room. We were all so pissed off as we had long day out and came back almost to midnight and this happened. I am very sure anyone would be pissed with such issue. He apologised and offered another room but it was too late. We will be checking out the next day. So no point changing room. They should have offered a change of room the day before, knowing that the lock was faulty and could not change it as promised.
2) in my room (Room number: 384), i woke up to a very strong foul stench at 2.30am (stronger than before). It was too strong till i feel that something was wrong (again that spooky feeling) but eventually ignored it and went back to sleep. I just do not want to make a big fuss out of it since we will be checking out tomorrow.

The next morning, my uncle went to make a complaint on the door lock issue. Their service recovery were just late check out (4pm) for 5 rooms and offered transport transfer to the ferry terminal. The experience for this stay was so bad that i really had to write this long complaint. Futhermore, the hotel is too big with many redundant empty spaces giving the spooky vibes. Also, a section of the building which looked like apartments that seems long abandoned which gives the additional spookiness. Hence, i would strongly not recommend this hotel.

This review is the subjective opinion of a Tripadvisor member and not of TripAdvisor LLC.
fidazmn_
Singapore, Singapore
915
Reviewed 31 December 2019
28Dec-30Dec

4th time staying here. Staffs are always friendly and attended to my enquiries in such professional manner. Went with another couple and the staff who did my check-in (i’m sorry i didn’t get her name) automatically gave us side by side rooms.

the downside is the hotel is abit old so it looks pretty rundown. i think they just gotta brush up on the cleanliness as there’s more stains on the carpet compared to my last visit back in 2018. and i think their lift needs maintenance as well.

This review is the subjective opinion of a Tripadvisor member and not of TripAdvisor LLC.
hiiong888
Singapore, Singapore
288164
Reviewed 30 December 2019 via mobile
Not worth..

Pool is extremely dirty. No staff around to look around the cleanliness of pool surrounding too. There’s kid vomit near the pool and no one seems bother. No towel stock also the staff only left message like this sorry the towel is gone what kind of professional attitude is this and moreover the mesage wording also very strange. No offense

Hotel room is OK. Acceptable for my one night stay.

Location is not good. Quite far from eateries etc. However taxi to batam centre is about IDR 30k

Overall stay in this hotel is definitely not worth.

This review is the subjective opinion of a Tripadvisor member and not of TripAdvisor LLC.
connieruth777
Singapore, Singapore
1431
Reviewed 30 December 2019 via mobile
Value for money

Hotel looks great from outside but a little run down inside. Mega mall shopping centre is about 10min walk away along a major road. Hotel do provide free shuttle service to major shopping malls at specific timings. Massage rate at hotel is reasonable and best to make an appointment first. Hotel gym has limited equipment but plenty of dumbbells. Do go early for breakfast. Overall, value for money.