USD 33
View deal
Hotels.comUSD 55
Booking.comUSD 37
TravelocityUSD 55
View all 14 deals
Prices are provided by our partners, and reflect total costs of the stay, including all taxes and fees known to our partners. Please see our partners for more details.
Payments made by partners impact the order of prices displayed. Room types may vary.
david1971_41
Melbourne, Australia
12

Loved it. Stayed here for one night as we drove around the north of thailand early july. Perfect location to explore the golden triangle. With my wife and 2 daughters and felt so safe in the area and the whole of thailand, probably safer than melbourne. The hotel room was perfect, $50 aud with the best view from the balcony over the meekong river looking over to laos with the moon on the water and a lightning show over the mountains of laos. Swimming pool was fantastic with the same views and for dinner we rode push bikes provided by the hotel into town and had a meal on the street. Bathroom was perfect with a beautiful hot bath to relax in and not feel confined. perfect place to stay for a couple of days and relax for only 50 bucks a night. Just remember your in another country and not everyone speaks english learn a little of there language yourself.More

Show less
See all 88 reviews
Payments made by partners impact the order of prices displayed. Room types may vary.
Nearby Hotels 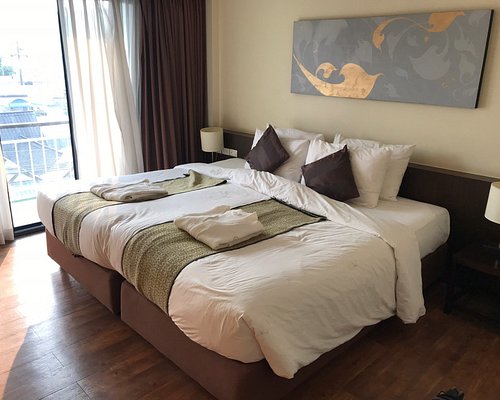 This almost new hotel has a terrific location on the Mekong river overlooking Laos,with frequent international boat traffic observed from the room's balcony. The superior room I had was very modern and comfortable. Fittings are of a very high standard. There's no noise from the aircon as the unit on the balcony is enclosed. It was low season so very quiet. There's a car park opposite.The breakfast menu is vegetarian and geared to Asian tastes. The staff are friendly,as was everyone I met in Chiang Saen. This is an excellent base for exploring the Golden Triangle. The room rate is a bargain.

Room tip: A river view is a must
Ask john b about Siam Triangle Hotel
Thank john b

This review is the subjective opinion of a Tripadvisor member and not of TripAdvisor LLC.
macsdevo
Macmasters Beach, Australia
11842
Reviewed 13 June 2012
A bit disappointing

Didnt love it. Tried to make this hotel look trendy and up market but haven't pulled it off. Shoddy finished in rooms. Glass walls in bathroom and toilet so no privacy when on the loo. Charming when 3 women are sharing. The put a curtain up but that wasn't much good. Noisy air con out side on our veranda. Though the best thing was the pool. Nice,
Though they never uncovered the pool chairs everyone had to do that themselves. Lawn needed mowing and gym equipment wad broken. The whole place needed some maintanence.
To far to walk into town. Definetyly need a driver. We bought one with us which made the stay much better. He could take us put for the day.
Breaky was ok, great coffee and lovely staff. They did there best though very little English but that's ok we were in thailand. Good luck. I'd stay on the golden triangle next time.

This review is the subjective opinion of a Tripadvisor member and not of TripAdvisor LLC.
welshieincrete
11
Reviewed 2 June 2012
Just be aware of a few things...

We stayed here for 5 nights in April 2012 and we found the hotel nice enough as we had views overlooking the Mekong river from our room balcony. The staff were polite and dinner in the evening was good. However some of the items on the menu were unavaliable for all the time we were there and the Room Service was diabolical.One morning at breakfast there was no milk and we had to forcefully ask one of the staff to go to the nearest supermarket to buy some.
On our first evening here we booked a day's trekking in the National Park at Chiang Rei and we asked if the walk was strenuous and we were told "not at all,no hills and no difficulty". This however turned out to not the case and after a very long difficult trek in the jungle where the paths were very narrow, steep and overgrown I fell and badly broke my ankle. The guide panicked as he was not equipped for dealing with any unforseen event/accident. There was no mobile phone signal, no short range radio with the Park Ranger headquarters and no first aid knowledge, My daughter and granddaughter went for help with the guide and my husband stayed with me until help arrived . I am 62 and when help eventually arrived it took 4 hours to get me out of the jungle to a 'Jungle ambulance' and another 45 minutes to hospital. I have not walked since April12 and had to have 2 operations on my leg whilst in Thailand.
The hotel had a wheelchair to help me and the concern stopped there. It seemed that the staff were more keen to get us to spend money and even go on more of the 'trips' that they were offering. So please beware that the trips that are offered to you are extremely amateurish and be careful should you take any up. I will go back here to stay but for a shorter time and I definitely won't be trekking!

This review is the subjective opinion of a Tripadvisor member and not of TripAdvisor LLC.
misterfloppy
Chiang Mai
78
Reviewed 28 April 2012
Let down after being promised a lift - poor attitude to guest safety & risk

A nice enough hotel, with pleasant and friendly staff, in a position overlooking the river.
I wrote this email to the hotel, which was unfortunately 'bounced':

Dear Sir/Madam,
My wife and I have just returned to the Siam Triangle Hotel after a very pleasant meal in the town. Unfortunately it was spoiled for us due to the difficulty finding safe transport back.
Because of the relatively remote location, past empty areas which have been described as "spooky" and "risky", we were initially reluctant to take a room, and were only convinced by the assurance of the receptionist that transport, both in and out of the town, when needed in the evening, would be provided on request.
The minibus driver brought us into the town, where we ate and had a beer. We had given him a much more than adequate tip to encourage his return when we called later for a lift back. So you can imagine our surprise and disappointment when, on calling the hotel reception, at the relatively early time of 8:01pm, to be told that the driver had finished an hour earlier and that we would have to find our own way back. Then we realized that the receptionist's remark, that we should have driven ourselves in and out, had been meant seriously. As I said at the time, I had no wish to break the law by drinking and driving - which was why we wanted a lift there and back.
After a fruitless search for a tuk-tuk or any other form of transport back to the hotel, in desperation my wife appealed to a bus that had just disgorged its last passengers of the evening and was about to head for home. The charming conductress heard our story and agreed with her driver to bring us to the hotel, remarking along the way how right we were to recognize the risk we would have been exposed to on foot, as we drove through the dark and deserted streets. My wife and I were so delighted to have got back safely in what was probably the biggest taxi in town of the night, and gave them THB200, which we hope cheered them up too.
As an HSEQ Engineer in the UK I am amazed and appalled at the reckless and inconsiderate attitude, of your hotel management and staff to the obvious risk we would have faced had we been forced to walk back to the hotel, and their lack of awarenes or training in such matters. We wouldn't have taken a room here without the specific assurance that suitable transport would be provided, and we were clearly mislead in this regard. It wasn't late when we requested the return lift, nor was it unexpected, as we had made our intentions clear, and your staff would have known that the number of taxis or tuk-tuks available was negligible. Our next stop, should we have been unable to find a suitable lift, as we luckily did, would have been to request a lift from the nearby police station who would have recognized the risks of walking back.
My wife and hope that your website will provide additional opportunity for feedback on this matter, as it is clear that there is little regard for the safety of your guests.
I look forward to your considered response and plan to remedy this most unsatisfactory situation.

This review is the subjective opinion of a Tripadvisor member and not of TripAdvisor LLC.
fareastjim
Hong Kong, China
445315
Reviewed 14 April 2012
Good location to explore The Golden Triangle

We stayed here for two nights after travelling for two weeks in Laos. We arrived in Thailand at Chiang Kong border with Laos. We arranged with the hotel by email for them to send a car to pick us up from Chiang Kong and drive us to the hotel. The room was lovely and the views of the Mekong from our balcony and the restaurant were wonderful. The bath tub (and plenty of hot water) were really welcome after two days on a slow boat from Luang Prabang.

It is a nice hotel with a swimming pool. The staff are nice but we agree with the other reviewers that only the front office manager has fluent English. The staff are friendly and the reception staff helped us book a tour of The Golden Triangle which we enjoyed. The coffee at breakfast was really delicious.

Room tip: Ask for a room overlooking the Mekong as watching the sunrise is out of this world. It is also a verty beautiful view.
Ask fareastjim about Siam Triangle Hotel
1  Thank fareastjim