Absolute stunning location and setting just breath taking, have stayed here twice and would happily go back again, great pool and only a few steps away to beach. Handy location to restaurants and activities.

Room tip: Get the main house looking out at lagoon
See all 169 reviews
Payments made by partners impact the order of prices displayed. Room types may vary.
Nearby Hotels 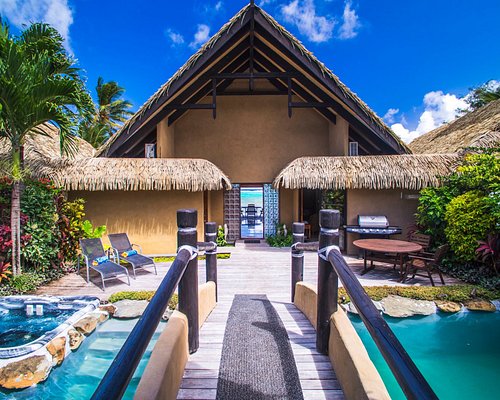 Slept 5 of us easily. My mum's 80th. Was very hot upstairs but with aircon and fan it cooled it down.
No sea view in the bigger house but a nice small swimming pool and beautiful lagoon.free use of Kayaks and snorkeling gear.staff are amazingly friendly. 2 min walk up the road to Muri shops. Would stay again

This review is the subjective opinion of a Tripadvisor member and not of TripAdvisor LLC.
Noel B
3
Reviewed 18 October 2019
Not a good look

What we wanted was a quiet villa on the waterfront at Muri. What we got was a single bedroom villa that was of a standard similar to a low grade cabin you might find in a New Zealand camp ground. We were appalled. The villa was falling apart, badly plastered, poorly painted, with lights either broken or too dim, no curtains in the bathroom, other curtains throughout the villa were dirty, and all fly screens were either poorly fitted or had holes in them. 'Clean' sheets were stained, and when replaced were no better. 'Clean' towels were covered in dirt stains and spots. The TV was one channel only and had rabbit ears pegged to a nearby curtain. The shower was damaged, the bathroom door was disintegrating, the fridge was a rusting hulk, all cutlery and crockery had to be washed before use, and our feet stuck to a tiled floor that had obviously not been washed for some time. Railing around the villa decking was in poor repair and would have collapsed if leant on, giving you a 2m fall to the ground.The villa had an overflowing septic tank beneath it, which stank, as you would expect, and there was no garden of any real description around the villa - immediately to one side was a mound of vegetation being got ready for burning on site, and immediately in front of the villa was a rough wire fence and a view of the next door property's backyard. It has to be said the view from the villa was appalling, and incessant dog barking at night certainly did not make it quiet. When Fern was approached she did nothing about it, saying she'd have things looked at after we left. For the price paid ($298/night) we were shocked at the standard provided and would not recommend this accommodation to anyone.

Room tip: Try somewhere else like Noosa.
Ask Noel B about Manea On Muri
Thank Noel B

This review is the subjective opinion of a Tripadvisor member and not of TripAdvisor LLC.
LeahM2187
3010
Reviewed 24 September 2019 via mobile
An enjoyable stay

We booked Manea on Muri at fairly late notice as it was the only family sized accommodation available for our dates. We were a little worried that it might be too ‘budget’ but we really enjoyed our short stay here. Yes it was budget accommodation, but it was spacious, tidy/clean and the beds were super comfy with lovely linen which is always a bonus. Little touches like bedside lamps, mirrors or wardrobes in bedrooms would have been great additions in making this accommodation just that bit more attractive. Wardrobe rails were in the upstairs rooms but not in the downstairs room. However what it lacked in luxury, it certainly made up for with its stunning beach views! The beach here is absolutely beautiful. The water is clear and not as full of coral or sea cucumbers as it is further along the beach where we visited a luxury resort that family were staying at. We didn’t use the swimming pool at all as the beach was just so inviting. Paddle a kayak to the adjacent island or walk across at low tide. Or just sit and watch the water - quite magical.

Fern the manager was very helpful via email in answering any questions before our arrival. The office is only open in the morning and as our flight arrived late afternoon, a key was left for us. We had trouble with some lights and the safe not working during our stay, but Fern got these sorted quickly for us.

We had the three bedroom villa (No.5) which was great for a family of four. Two upstairs rooms had a double and single bed in each room so could hold more people. The bedroom downstairs has a double bed. There are two bathrooms also. One of the rooms upstairs has air con and all rooms have overhead fans. There was no river view as it was overgrown. This villa was very private and quiet.

There were 4 kayaks available for use, two singles and two doubles. If you didn’t bring your own gear, there were snorkels, flippers and reef shoes to borrow which were in the laundry room.

Tap water is unsafe to drink on the island. Filtered water is available free of charge next to the laundry so buy a big bottle of water at the convenience store then keep refilling it for free on site.

Wifi is via a Bluesky hotspot. Data packs of varying sizes can be bought at local stores. We found this quite unreliable and the data disappeared unbelievably fast even though phones were barely used. There is a convenience store at the end of the driveway which was really well priced. They sold a good selection of fresh bread, milk, fruit, ice creams, cheese, chippies, biscuits, snack food etc.

The local island dogs are friendly and you might be lucky enough to have one join you on your kayak!

We would happily return to Manea on Muri.

This review is the subjective opinion of a Tripadvisor member and not of TripAdvisor LLC.
enjoylifenz
174
Reviewed 7 June 2019 via mobile
Absolutely beautiful experienxe

We stayed here for 6 nights.
After reading many mixed reviews we decided the good out weighed the bad.

Reception is only run limited hours. We found this no problem and our transfer knew what room we were in and showed us in (prebooked transfer)

The bungalow was very clean. It’s Rarotonga - you need to go with the flow. The tv sucks because no one goes to Rarotonga to watch tv. It’s not the hotels fault. Raro has crappy tv. Don’t blame hotel for it. (However it worked and we got a mix of NZ and Aus news channels)

The bed was comfortable.
We were travelling with an infant and portacot was provided free of charge.

Shower had better pressure than we have at home in NZ.

Outside chairs and tables provided and a BBQ with gas bottle.

We were in villa 3. We were told it was lagoon view (not front) and yes we could see the lagoon. See pic. It literally was a 20 sec walk to beach. No complaints from us!! Beautiful to sit on deck and hear water.

It’s not expensive. It’s middle road price. And it’s middle road standard. Great value for money. If you want flash go to the big resorts like pacific resort.
Yes some parts are tired and could do with a repaint. It’s Raro - you shouldn’t go there if you can’t handle island standards.

Pool was nice.
Photos are from my phone - fantastic setting And we just loved it.
Kayaks to borrow are good and fun.
Snorkeling gear and reef shoes are there.
Free laundry.

Great location!!!!!! Less than 5 mins to a mini dairy. Near rental cars and restaurants and easy walk to Muri night food markets.

There is lagoon front villas - but they are part of Manea on Muri.
The photo from our deck (taken from villa 3) and one in front of it is villa 2. And behind us was villa 4.

(Villa 1 looked like it was “garden view”) and they have another 3 bedroom villa set back a bit more by a small creek.

This review is the subjective opinion of a Tripadvisor member and not of TripAdvisor LLC.
O2669VJjasonc
West Hollywood, California
5376
Reviewed 20 May 2019 via mobile
Ocean view is a complete lie. Fern was terrible.

This hotel is all lies. There is no Ocean View, you'll get 1% of water view from your patio, and it's the swimming pool. If you happen to get the villas further back, you're screwed for good. Also, if you book the room for more than $100 a night, you should've just waited last minute.

Here are the details:

1. All the rooms used to have ocean views until the nextdoor neighbors built buildings and completely blocked the view with fences. Don't believe me? Ask the locals. This is not a new problem.

2. Fern, the manager is a manipulative liar who is very articulate and knows how to put you down if you complain. She'll make it seem like it was your fault for believing the room actually comes with an ocean view. She was actually fired by the neighbors after they bought the other half of the property (that actually have the ocean view). She knows what she's doing and it's disgusting that she keeps manipulating people into booking this property.

3. My neighbors only paid $100 a day instead of $200 a day because they booked last minute. Don't ever pay full price. Even half price isn't worth it, according to our neighbors. Their bathroom doors were broken and our place was not clean at all. No manager to be found on site. They visit maybe 2 hours a day and you're on your own, sunshine or storm.

Read the descriptions properly and look at the pictures. The title of the room on Agoda is a complete lie. Ocean view is a mental concept, the only ocean you'll see is if you walk all the way down to the swimming pool.

This review is the subjective opinion of a Tripadvisor member and not of TripAdvisor LLC.
View more reviews
PreviousNext
123…
<script type='text/javascript' cro