TianBao Holiday Hotel
Lock in great prices from these sites

ZenHotels.com
Prices are provided by our partners, and reflect total costs of the stay, including all taxes and fees known to our partners. Please see our partners for more details.
Payments made by partners impact the order of prices displayed. Room types may vary.
deb-terr
Brockville, Canada
259258

My husband and I stayed here for only one night as part of a tour group excursion. We found our non-smoking room and carpet to be quite clean and the bathroom well appointed with slippers, shampoo, conditioner and soap available to use. Be careful though not to use the many things that you will find in your room for sale, or you will pay! Some of these items are quite amusing though and gave us quite a chuckle. Our room had a king size bed with a large window that faced the main street. The bed was a bit on the hard side for us but much more comfortable than the bed that we slept in at the Mercure Wanshang in Beijing. Although the main street was quite busy with many cars, noise was not an issue for us. This hotel is in a great location to go out for dinner at a local restaurant or to do some shopping. The provided breakfast buffet was rather good we thought with a variety of both Chinese and North American dishes available. You definitely will not go hungry! However, we were not able to access the Internet in our room to use our tablet even with our portable wireless Nano Router.More

Show less
See all 82 reviews
Payments made by partners impact the order of prices displayed. Room types may vary.
Nearby Hotels 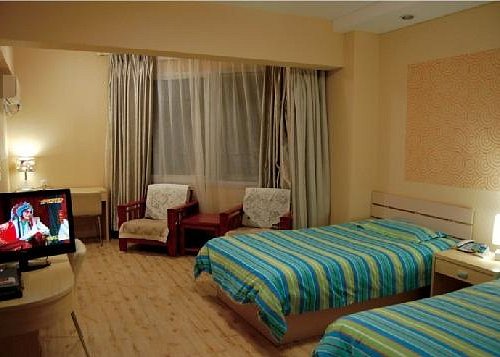 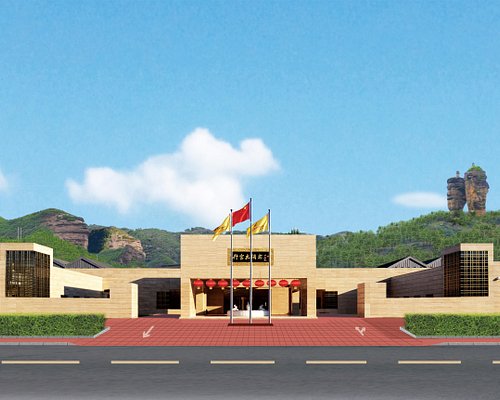 Large hotel rooms complete with badly stained carpet (use the free slippers) that stink of cigarette smoke. Its an old outdated hotel badly in need of a refit. The walls are thin & the traffic noise (honking horns) is bad but it did stop at around 11pm
The breakfast room was unheated so it was cold. Breakfast was very Chinese & the only western food was toast & fried egg. They ran out of cups & cutlery as the hotel was quite full.
We were on a tour so got very little time in the room so it was adequate for our needs. There is a shopping centre & a great bakery that serves great coffee within walking distance. Not on my list of hotels to recommend.

Room tip: I'm not sure that there are any good rooms!
Ask alplan about TianBao Holiday Hotel
1  Thank alplan

This review is the subjective opinion of a TripAdvisor member and not of TripAdvisor LLC
Fael
London, United Kingdom
3929
Reviewed 26 October 2012
Passable but don't get your hopes up

We spent 2 nights at this hotel, and it is a local hotel, so our expectations were not high. It is rated 4 stars, but definitely falls below what one would think of as 4 stars for international hotels. The carpet seems to have been recently replaced, and the cleaning lady was very friendly. The room and bathroom smelt fine -- we asked for a non-smoking floor. There was no shower curtain which was a little tricky. It being autumn, we did not have any heating, so the room was quite cold at night -- remember to search around for extra duvets which will help tremendously.

For breakfast, I would suggest skipping it and heading to the McDonald's a few metres down the road, as the breakfast room was not at all clean and the food completely uninspiring (if not rank).

Just don't expect too much and you won't be too disappointed.

This review is the subjective opinion of a TripAdvisor member and not of TripAdvisor LLC
Vogboots
Beijing, China
817
Reviewed 1 November 2011
By China standards Chengde hotels are really expensive!

The Tian Bao Holiday Hotel (TBHH) is a 21/2 star small-town hotel charging the prices of a stay in a 4-star in the major Chinese capitals. As pointed out in previous reviews, it might just be the best Chengde has to offer. Most people'll never know for sure as Chengde is the kind of place to visit just once.

All the negatives raised in earlier reviews are fact. But they prepared me to expect the worst so, all in all, it was not as bad as expected. I go thru' the list again:

2. Carpet is dirty - scuff marks all over rather than big stains ... Keep your shoes/slippers on.

3. Toilet smells - again a common thing in China, even in luxury apartments in Beijing like the Hyatt Serviced Apts it happens. Blame the lax (or non-existent) enforcement of building codes. Chinese plumbing sucks! At least at the TBHH, it's a musty whiff rather than a giant pong!

4. Breakfast - probably unrecognizable to most non-Chinese eyes, for eg, 5 different types of steamed buns, 3 different flavours of congee! But it's quite a reasonable spread. Again it's standard fare for most small town Chinese hotels and not unpalatable. For those not adventurous enough, there's a MickeyDs 100yards down the road.

5. Bed and toilet cleanliness is surprisingly good! And for a laugh, peek into the amenities basket in the bathroom! Direct translation: "God Oil for Men" and "God Oil for Women" for "entrance" purposes! Go figure! ;)

6. Room rates - daylight robbery! I suggest you start a small luxury BnB in Chengde and give TBHH a run for their money.

A pity a lovely tourist destination like Chengde cannot attract the investments for better hotels, but I guess its because tourism is the only $maker there but the tourist season lasts merely 6 months in a year.

I hope I have not painted an overly rosy picture of TBHH. Caveat Emptor :)

Room tip: The suites are really big, and judging by previous reviews seem less problematic than the standard rooms. So splurge in Chengde and economize in the bigger cities and major tourist/coal/ manufacturing centers with more accommodation choices.
Ask Vogboots about TianBao Holiday Hotel
6  Thank Vogboots

This review is the subjective opinion of a TripAdvisor member and not of TripAdvisor LLC
888traveler
Dublin, California
1211
Reviewed 31 May 2011
Clean rooms but smelled like smoke!

Even though we were placed on a non-smoking floor, our rooms (my parents, sister and brother's rooms) all smelled like smoke. The stench was really terrible and there was no way to open the windows to air the rooms out. The bathrooms were clean but nothing fancy. The rooms are a nice size (not too small but not very spacious either). I would rate as an average and clean hotel but because our rooms smelled so bad I can only give a rating of 2 our of 5 stars.

I stayed in this hotel for one night as part of a tour package. Although it was ranked a Chinese four star, I would only give it a 2 plus star.

The hotel is located in the busy and shopping part of town. Very convenient, but the shops in Chengde kind of in an older mold.

The hotel is typically Chinese managed. Maintenance was not their top prioirty. Most of time, only part of the lobby was lit. When it was lit, it looked great. When the chandellier was not on, the lobby looked kind of shabby.

The room was good size, but the bed is very hard. The pillow was small and kind of strange lumpy feel. There are over 30 channels on TV. But all in Chinese except one CNN channel. To me the bathroom was outdated.

One major major complain, as with many Chinese managed hotel, is that the room temperature could not be set properly inside the room. Although there is a thermostat, it actually just an on-off and fan speed. Although I set it 65 F, the room got so hot in the middle of the night, I had to turn the whole temperature control off and open the window.

It maybe one of the better hotel in town, it definitely is NOT a four star. High two star it deserves..

This review is the subjective opinion of a TripAdvisor member and not of TripAdvisor LLC
View more reviews
PreviousNext
12…14
<script type='text/javascript' crossorigin='anonymous' async onerror='__scriptLoadError(this,true);' src='ht