Remember the reason your there... - Review of Beihai Hotel

Prices are provided by our partners, and reflect total costs of the stay, including all taxes and fees known to our partners. Please see our partners for more details.
SandiT610
Perth, Australia
5866

Remember the reason your there...

We booked this hotel knowing the choices were limited..Staff were not the best we had had in China, but you got to take the good with the bad... the rooms was better than I thought, small but clean, did smell a bit musty but we could handle that... It was cold.....but they do give you big doona...Restuarant was very average but considering all is bought up by porters was acceptable...do not let the reviews of the hotel put you off coming to this amazing spot...
I did go down for a foot massage and was dissapionted to have a sign shoved in my face in regard to TIPPING... IF HAPPY WITH SERVICE and an amount on it .. I was not going to be bullied into a large tip so only left a small one... Just keep an open mind and enjoy the breathtaking views..More

Show less
See all 433 reviews
Payments made by partners impact the order of prices displayed. Room types may vary.
Nearby Hotels 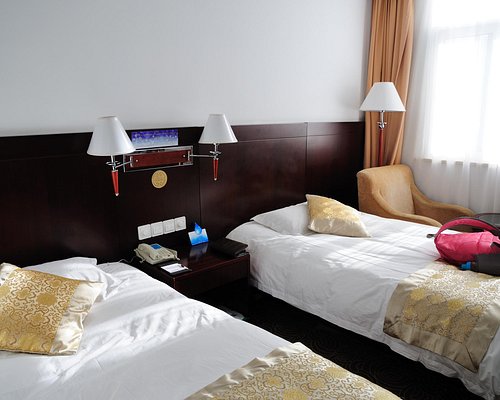 We have no choice but to pay $150 a night at this run down hotel since there is hardly any other better choices on top of the mountain. We also understand everything including the clean towels are brought up by the porters. But what we can't accept it's the poor service by hotel staff. They all seem like they hate their job. Food at the hotel restaurant was very expensive and not good . The room carpet was dirty and and really hard bed to sleep in. We arrived toward end of Oct. and at night the temperature dropped down to low 40's and no heat in the room. When asked the hotel about turning on the heat they told us to use the extra blanket in the room to keep warm at night. No hot water until 7AM and the shower leaked everytime flooding the small bathroom. The only reason why I gave this hotel two stars because of the location. It's the only hotel on top of the mountain that is close to all the sightseeings. The other two hotels are worse in condition and farther away.

This review is the subjective opinion of a Tripadvisor member and not of TripAdvisor LLC.
nniko
Bay Area, CA
3628
Reviewed 2 December 2012
Mediocre in just about every way

Despite being the "most stars" hotel in the Huangshan peaks, it was pretty poor in almost every way. Service was minimal and lackadaisical (for example, the bellhop who was supposed to show us to our room just took us to the base of the stairs, pointed up them, and turned and walked off). The room was small with minimal storing space and extremely hard beds; the carpet was quite stained in many places and the shower door was lacking seals so there were large puddles in the small cramped bathroom after every shower. The view out the window was of a nearby wall. It was pretty noisy, since the room doors were thin with a big gaps underneath. The one decent thing about it was that the room was clean (other than the stained carpet). They were surprisingly "cheap" in how they handled guests, despite being a quite expensive place for China; for example, you have to pay a substantial cash deposit for the electronic key card when you check in, the breakfast buffet had no juice, the room heat didn't come on until 6 to 7 in the evening (when it was near-freezing outside, and darn cold in the room), and they leave only one 1/3-size roll of very cheap toilet paper in the room each day, which wasn't always enough for us. (The second day, we asked the maid with the cleaning cart for an extra roll, and she wouldn't give us one, but told us to call "Customer Service" on the phone. We eventually just went to the convenience store downstairs and bought a normal-size, normal-quality roll ourselves!) At that time of year (October-November) there's nowhere to eat nearby except at the one restaurant in the hotel, which was quite bad. After the first night, we only ordered non-meat dishes because the meat was nearly inedible. The breakfast buffet was unappetizing, and there was nothing to drink except tea, awful coffee, and cola (in what would anywhere else be an orange juice dispenser). Still, being up among the peaks is far better than staying down the mountain and walking or waiting in lift lines every day, so the location was good. Next time, I'd try a different hotel up there, though.

This review is the subjective opinion of a Tripadvisor member and not of TripAdvisor LLC.
FinaF_12
Jakarta, Indonesia
5999
Reviewed 24 November 2012
Acceptable considering it is way up there

Normally I would not pay usd140 to stay in a hotel like this. But up in huangshan where difficult for vehicle to reach and they said mostly men labor carried the furnitures etc up by foot so probably that's the normal price here. This is the nearest hotel from yungu ropeway. When we arrived at noon the lobby was full of tourist but check in quite fast. We were very lucky it was a sunny day as we were told the day before was raining. The room however was very standard and old. quite clean. But the worst part is no heater at all, not even an electric heat blanket and it was freezing at night. Food was super expensive on the mountain, in the hotel restaurant u hv to pay CNY 280 for a fish, the cheapest is CNY 60 for a vegetable dish. Cny 25 for a big bottle of mineral water is standard. Lucky we brought along some food like oatmeal, apples, and biscuits to save money.
The best part of this hotel is to see the sunrise you only need to walk about 50 m from the lobby. If I returned I probably will stay here again

This review is the subjective opinion of a Tripadvisor member and not of TripAdvisor LLC.
vincentlau
Singapore, Singapore
302320
Reviewed 25 October 2012
Probably the best hotel in Huangshan amongst all the 3 stars....

Review of Beihai Hotel
4-star on the mountain can't be compared with 4-star in the city plus being a
typical chinese hotel, beds are super-hard, showers don't work well, sanitary
conditions are basic, bathroom floods when showering, no coffee facilities and
aircon is either very cold or off. But this hotel being the hotel where all the
chinese leaders stay when visiting huangshan, it has a elaborate dining hall and a
lux presidential suite. But location at the scenic West Mt is fantastic. U can take
scenic walks up a few peaks all nearby for fantastic views of the avatar-like Mt
huangshan. And the west mountains is great place to see the sunset (more colourful
and scenic and less crowded) vs waking up at 5am, and jostling for your dear lives
just to see a 15 second sunrise, usually semi-blocked by pine trees or bobbing
heads....) The foot massage in the hotel was a welcome delight after a long day of
climbing and walking. The service was professional and value for money.

We walked to the Jade Screen Hotel and it looked quite dilapidated and so, decided not to stay there at all.

They were still building a few other new hotels in Huangshan so there should be more choices in the years to come.

Room tip: When you get into your room, dont start unpacking. Open the windows and check for noise, some of the rooms face the main courtyard and you will have tons of chinese tourists and tour groups with loudhailers yelling over the whole day,,,dont be shy to ask for a room change until you find a quiet one...
Ask vincentlau about Beihai Hotel
1  Thank vincentlau

This review is the subjective opinion of a Tripadvisor member and not of TripAdvisor LLC.
iawn2
Alberta
1811
Reviewed 24 October 2012
Terrible

Do not stay here. There is no heat in any of the hotels up on Huangshan. Their explanation was to be green and environmentally friendly. It was freezing at night and just miserable for for the 2 of us senior folks. It was so cold and windy that we didn't bother to climb the stairs just to watch the sunrise.The food was no terrible and expensive. Unless you have this fetish of watching the sunrise on Huangshan, make it a day trip or 2 day trips and stayed in the hotels down in Huangshan city.

This review is the subjective opinion of a Tripadvisor member and not of TripAdvisor LLC.
View more reviews
PreviousNext
1…262728…
<script type='text/javascript' crossorigin='anonymous' async onerror='__scriptLoadError(this,true);' src='https://static.tacdn.com/assets/lmr1u9.c94a1889.es5.js'