USD 69
View deal
Free cancellation until 30/06/21
Expedia.comUSD 76
getaroom.comUSD 78
TravelocityUSD 76
View all 13 deals
Prices are provided by our partners, and reflect total costs of the stay, including all taxes and fees known to our partners. Please see our partners for more details.
Payments made by partners impact the order of prices displayed. Room types may vary.
Aniss Fadilah N
Kuala Lumpur, Malaysia
9354

Booked a package for room stay which includes breakfast and afternoon tea for 2 persons. The room was really spacious and nice but a bit odd on the room layout but it was fine. The bathroom was nice too with shower and bathtub. The breakfast is great with a lot of varieties and choices, they were following SOPs which they served the buffet for us. As for the afternoon tea, it was really lovely and it was quite a lot though. The staff packed the leftovers for us which we were really thankful. We were given a late check out too. Thank you so much for a great experience.

See all 3,671 reviews
Payments made by partners impact the order of prices displayed. Room types may vary.
Nearby Hotels 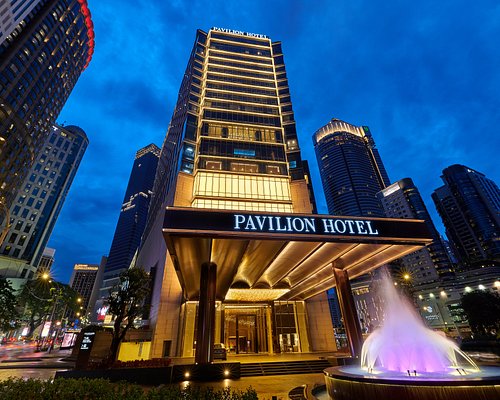 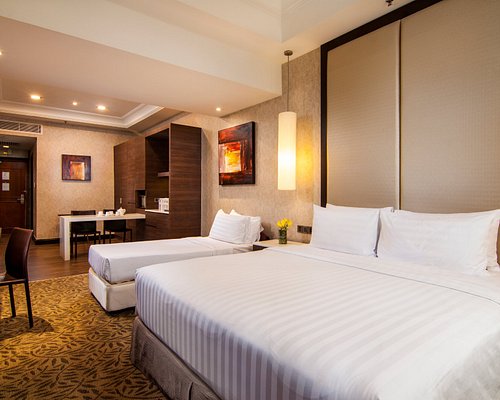 Check-in took awhile because I was waiting behind several couples, but at least the staff realised that and diverted a few to other counters. Check out didn't take as long because it was down to the wire and checked out right before noon.

The deluxe king room I was in was plenty spacious for one person, so no complaints there? Slept ok for the most part, probably wasn't really noisy where I was cos the room I stayed in was away from the lifts? The in-room amenities was alright, but I also didn't use everything like the iron and hair dryer.

Didn't spend a lot of time in the pool, but the water seemed a little murky/cloudy. Pool time is only limited to 30-minute sessions because of the times we're in, but otherwise not crowded at all LOL

If you're an in-house guest, they provide a van shuttle to both KLCC and Pavilion on a first come, first served basis on Saturdays and Sundays.

My main complaint about the experience was the only thing the hotel has no control over: the basement parking lot because it's run by a third party.

This review is the subjective opinion of a TripAdvisor member and not of TripAdvisor LLC
Kerry S
Kuala Lumpur, Malaysia
113144
Reviewed 12 April 2021
A Good Property with Room for Improvement

Being a resident, a staycation at the InterContinental Kuala Lumpur was perhaps an apt choice since we are Spire Ambassador and not having had any opportunity to stay within the IHG during the MCO.

Firstly, we made a good choice by driving a small car as the car park can be quite daunting for big or LWB cars. The entrance to the car park is quite discreet, and the lighting makes it clouded with uncertainty. Guests are actually directed to park at B2 - and for a first timer, that alone can be quite a task. My suggestion for this 5-star hotel is to at least make the car park entrance more prominent, repaint in brighter colours, add a heck lot more of lighting, and at least paint or mark the passage for guests to be directed to B2. That would be a lot of help. The car park space ... now thats something we got to live with.

The lobby area is impressive - tucked at the other end of the car park lifts. But functional. However, the greeting and staff behind the counter could do with more training. Perhaps due to the limited number of guests, their shine has somewhat dulled a little. Otherwise, check in was quite efficient, just missing a little gloss.

The lifts to the room are super efficient compared to some InterContinentals we have had the privilege of staying in.

On first impression, rooms look a little tired although it is very distinctly an InterContinental room with its feel. The aura could be a little more uplifting. Show area is somewhat crammed, despite it being a Club Room on the 25th.

Not much of a view other than a construction site at the intersection, and good thing was that the traffic noise was dampened though the occasional sirens crept in giving us a feeling of being in NYC.

I used the gym facilities - and there was a cloth and sanitiser on a bench - encouraging everyone to use to before and after. I shudder to think that the cloth has never been replaced or at least washed.

Breakfast was above average. Was expecting more from the InterContinental's reputation of having a feast for a spread. What drew me back was the number of people using the same spoon for common dishes - and the thought that if one of them was positive, that would have created a super cluster.

Overall, a good stay and a great sleep - mattress and pillows were fresh and firm.

Plus a 10 minute walk to KLCC - it is quite a central location to be in if you wish to be nearer to KLCC. Conversely, it is a 10 minute drive to Bukit Bintang - (add another 5 minutes to get out of the car park).

This property will truly be a jewel if little gems like this are attended to and polished.

It was a getaway trip for my wife and I especially after MCO 1.0, dealing with post MCO1.0 adjustments, work and etc. I am very pleased with the service by the staff. They really made me felt at home and comfortable. Summary: clean, spacious enough, great service. The only thing I think it can be improved would be the breakfast (eg: more variety, taste can be improved) and also the smell of smoke in the toilet, probably due to the previous guest who stayed in the room. Yup, I will return if I want to pamper myself in future.

It was refreshing to be able to get out of the house and have a staycation at the Intercontinental KL. Prices were never this affordable before which made it excellent value for money given the discounts most hotels are practicing due to the pandemic recovery.

Service was excellent and personalized. (Special mention goes to Harry, Club Assistant and Xinweii, the Assistant Front Office Manager) except it maybe could have been quicker if they were at optimal staff count. Believe some staff may have been cut due to less occupancy, still the surviving staff tried their very best to make it seem like all's good!

Room was impressive and my family had the best sleep from the bed's comfort! Swimming pool was mediocre. Food was about average for a hotel of this standard, nothing to shout about here.

Overall again, it was the service. Kudos to the Intercontinental KL team!

Had our so called New Year dinner at the restaurant. I would say all staff are very efficient. Thanks to Ms. Jay and Ms. Noriana for the great hospitality. Both of them so friendly and helpful. The food was good even there is no buffet, the set menu is still worth the price. Keep up the great momentum!!