StayForLong
Expedia.com
Hotels.com
View all 14 deals
Prices are provided by our partners, and reflect total costs of the stay, including all taxes and fees known to our partners. Please see our partners for more details.
Payments made by partners impact the order of prices displayed. Room types may vary.
MBIB
Brisbane, Australia
42

The hotel was pretty much on the top scale of our ranking (and we have stayed in hundreds over the years) but I deducted a point due to the located which I will explain later.

There is not much to say. Everything was great including breakfast on the first floor which had a huge range and probably 20% of western food. Didn't bother us if you know what to choose from. Rooms where absolutely quite, FREE WIFI which is a huge bonus for me, friendly and helpful staff with enough English to get me through.

Now to the location.
I thought I'm pretty good in booking rooms and planning our trips ahead and I had hardly ever any problems in the years gone by. But this one got me by surprise. On the map location I thought it would be a 10min ride by taxi to the main tourist locations such as West Lake and the old village. But the traffic is unbelievable. It took as 1 hour each way and while its not expensive it does take 2 hours off your day and you cant really pop into your hotel during the day to freshen up as you spend too much time on the road.
West Lake is a must as is shopping in Hangzhou and luckily we had some local friends which showed us the cheapest shopping spots where no tourists are found. We couldn't find it much cheaper anywhere in China on our trips.

As of the time we visited Hangzhou (07th April 2012), a new Subway is being constructed. It should be finished by the end of the year which i guess should improve the transport situation immensely.

Overall, I would certainly stay again in this hotel if I have any work to do on this side of the town, but otherwise I would opt for a hotel near or around West lake, preferably on the east side of the lake. And keep in mind that West lake is massive as well and there are millions of people.More

Show less
See all 248 reviews
Payments made by partners impact the order of prices displayed. Room types may vary.
Nearby Hotels 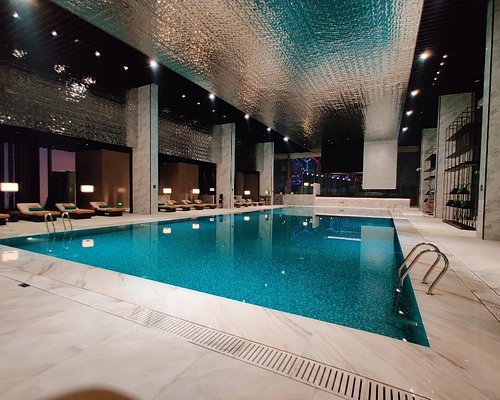 This hotel is very beautiful and confortable. You can find different kinds of restaurant inside the hotel (grill, caafe, chinese, japanese cuisine) and an excelente massage service - very profissional.
The room is very clean and confortable too. Very nice view.
The breakfast you can find many options of eastern and western food.
Internet Wifi in the lobby and with cable in the room.

This review is the subjective opinion of a Tripadvisor member and not of TripAdvisor LLC.
Amees B
Shanghai, China
1738
Reviewed 2 December 2011
Had a nice stay,very nice food!

Visited the hotel in december 2011.Dont judge the hotel from the exterior look.It looks old but the inside is warm and welcoming.The staff is also very warm.The single room(for one person) is too small,even for one person.U feel cramped.But then I was upgraded to another room and the room for double is nice,good space.Bathroom ok,well equipped.Not as good as the 5 star branch "New world hotel".But i must say the dinner in the western cafe is really very good.Large variety and very well served and the breakfast is awesome.Much better than the 5star one.Too many varieties.You can easily skip lunch.The hotel is also equipped with a fitness room,though no swimming pool.But tennis table is free ,unlike other hotels.Overall,it was a nice stay and if i had to choose,well i will return back.

This review is the subjective opinion of a Tripadvisor member and not of TripAdvisor LLC.
Sanaindia
India
64
Reviewed 8 June 2011
Nice hotel to stay but better avoid breakfast

Centrally located at 20mins drive from Xiaoshan International Airport, close to the textile city of Hangzhou/Shaoxing, this is a very comfortable hotel to live into. Since you are in China do not expect any more English for conversation than the regular Good Mornings and Good Evenings. I was out of luck because the Italian restaurant was under renovation and for the american diner Chef was on leave. However the rooms are very comfortable and if you are on the higher floors you can expect to see the best skyline of Hangzhou.

This review is the subjective opinion of a Tripadvisor member and not of TripAdvisor LLC.
wendywwBrighton
Brighton
2844
Reviewed 25 September 2010
The "5" Rating for this Hotel Must be on a Scale I'm Not Familiar With

I traveled to China last week as the result of a speaking invitation. It was my first time in the country and our first two days in Shanghai could not have been better (I also rated the Shangri-La in Shanghai). However, it made us ill-prepared for what we faced at the New Century Hotel in Xiaoshan. The pictures that we had seen on line made it appear to be as nice as the "5 star" rating that it has on TripAdvisor, but our experience was quite different.

Our host (a Chinese consulting company) graciously booked a Business Suite so that my colleague/traveling companion could share my room on a roll-away bed and not have to pay for her own room. When we arrived at the hotel, we were pleased with the look of the hotel lobby and in fact, all of the common areas. They were very nicely decorated and maintained -- very clean and shiney. This in no way prepared us for the room that they were about to escort us to and leave us in. No sooner had the bell captain closed the door to my room, I turned to my colleague and said "They can't possibly expect us to stay in this room." Business Suite #1017 had absolutely no redeeming qualities, unless you count to the two very large boxes of wrapped condoms on the bathroom counter. Really!?!

That could only be topped by the open condom wrappers that we found in the bedside table drawers while we were hunting for the "Guest Services" guide. Despite having turned on every light, both rooms had a seedy, dingy look to them. On the other hand, if you review the pictures I posted with this review, you might agree that it was probably a blessing that the lights weren't any brighter. The room also positvely reeked of stale smoke odor.

We were traveling with a vendor-partner who is based in Singapore and has traveled to China several times. We asked him to come and take a look at our room to see if it was "standard fare" for the hotel and for China. Once he got a look, he admitted that although his own room was not great, it was about what he expected and certainly much better than ours. My primary panic at that moment was that if this hotel not only received 5 stars on TripAdvisor, BUT was also rated the #1 hotel in Hangzhou on TripAdvisor, what other options did we have?

I called downstairs for assistance and after several broken chinese/english minutes was transferred to the Assistant Manager. To her credit, she immediately came upstairs to see what our concerns were. I can't believe she could have been very surprised at what she found, as I would expect an Asst Mgr to be familiarized with his/her own guest rooms, particularly the 4 "Business Suites." She seemed to appreciate our concerns and asked if I would give her some time to see what else they had available.

I was almost positive at that point that the hotel would not be able to find anything we would be comfortable with, especially since some further investigating turned up a list of guest policies including guidelines for: using rooms by the hour, taking items from the room (full price list for each item in the room) and prohibiting card playing, etc.

About 10 minutes later, the Asst Mgr called from the 16th Floor and asked us to come and take a look at Room 1617. Happily, the difference between the two rooms was night and day. Although the condoms were still on the bathroom counter and the carpet would have benefitted from a good cleaning, the room had been significantly updated. In fact the creepy walk-in closet in Rm 1017 was actually a guest bath in Rm 1617.

One final word of caution...the "No Smoking Floor" on 16 is apparently more of a suggestion than a rule. As we were leaving the 16th floor with the Asst Manager to go and retrieve our luggage, a maintenance man got off the elevator with a cigarette and continued to smoke it as he walked down the hall and right past the Asst Mgr, who didn't say a word. We could also smell the smoke coming from a few other rooms from time to time. Still much better accommodations than the first room. I'd give our second room a solid "3."

In short, the common areas in the hotel were very nice, the service at the hotel was pretty good, the food was okay, but beware the guest room they put you in!