Horrid but out of option - Review of Queen Hotel

Horrid but out of option

I wish there would be more accommodations around Surajthani station to choose but this is the only option we have. So we decide to hit a sack here before heading off to Koh Phangan next day.

Being Thai and has been in much worse locations like rural India, I still wish I could give lower score in some categories such as cleanliness.

The reception staff is a rude guy. He refused to help my mother's luggage up to the second floor. His tone of voice and foul reaction when I asked for air-con remote control made me wonder why the hotel owner hire this guy.

The room is small with tiny dirty wash room - disgusting toilet seat, wash basin thick with dirt mark. When washing hand, waste water from wash basin both drip and flow out down direct to your feet. The shower head is above the toilet. No hot water.

If you wish a better hotel, call a taxi to a hotel further.

Show less
See all 25 reviews
Payments made by partners impact the order of prices displayed. Room types may vary.
Nearby Hotels 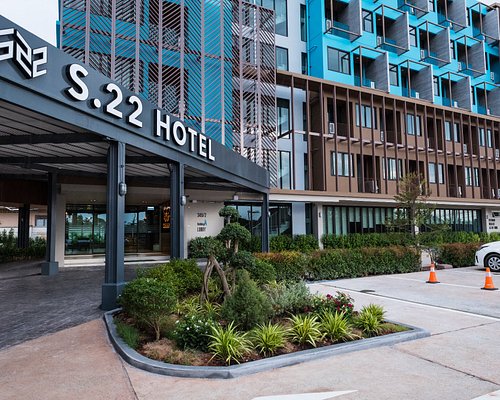 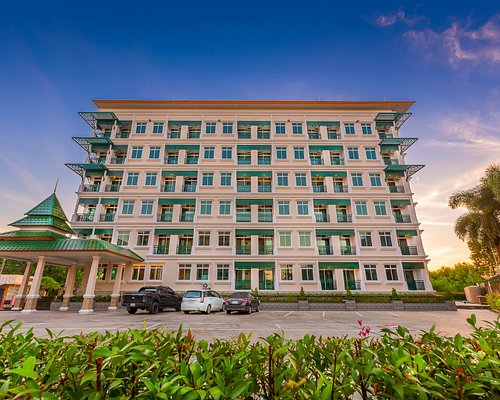 I was really worried about finding a cheap hotel near te train station. But this is exactly that. Single room w a fan is only 250 baht. Private bathroom. And the fan is quite powerful. The above reviews are quite scathing - I don't know what some travelers were expecting to get at the equivalent of $8 a night.

This review is the subjective opinion of a Tripadvisor member and not of TripAdvisor LLC.
denimBandung
Bandung, Indonesia
157102
Reviewed 30 August 2012
old,spooky hotel

I just need a place to stay to catch the earliest flight in the morning, so after the bus from phuket dropped me at the train station, the only hotel on the area (walking 5 minutes) is queen hotel. looking outside is like a hotel in a horror movie, i checked the room first before pay, and thinking well, i'ts ok, not too bad.
the room is quite big,clean, with old furniture, TV and small toilet. i'm from Asia, so i've been to worse toilets than at Queen's.
thanks God I;m not easily scared with the gloomy atmosphere inside the building.
there's a restaurant with internet cafe and convinience store next door.

Room tip: just check inside the room first, if you feel uncomfortable, maybe you should stay at the train stasion.
Ask denimBandung about Queen Hotel
1  Thank denimBandung

This review is the subjective opinion of a Tripadvisor member and not of TripAdvisor LLC.
peteandchris46
Hartlepool
9645
Reviewed 29 June 2012
Horrendous truly pitiful

We booked this hotel through hotels.com, looking forward to their well appointed rooms. Our stay lasted all of ten minutes, disgusting. The balcony door was barely adequate, rat droppings littered the balcony and what look suspiciously like a rat hole led through the balcony door. The bathroom didnt deserve the title of bathroom.
We really should have read the signs when we seen the cans of roach spray on every floor as we went to the room.
If you are really desperate for somewhere to stay before you catch the train, do what everyone else does and hang round the platform or local restaurants.
Avoid.

This review is the subjective opinion of a Tripadvisor member and not of TripAdvisor LLC.
Grrin
Oulu, Finland
3887
Reviewed 26 May 2012
Needs a Touch of Engineering

Well you could do worse than the Queen Hotel, but not a whole lot. I stayed here for one night before hopping on the morning train and chose a twin double air-con room for 500 baht (standard room 400 baht). I checked out the room before deciding to stay and my first impression was that it's just alright for one night. The close proximity to the train station (only one block away) makes it work and there's a 7/11 just about across the street.

There's a tv with many Thai channels (couldn't find any English, but who cares), a working air-con unit, a dangerous fan (about to fall off and noisy), no wifi and well, you can't close the windows fully either so there's a lot of noise from traffic (our room faced the street) and the room isn't particularly clean.

But all this is bearable for a short stay. The worst part was the bathroom that needs a bit more engineering. The drain pipe from the sink ends abruptly mid-air and the faucet leaks a little, so there's a constant stream of water on the floor. The shower was surprisingly cold (the coldest of the cold showers at this time of the year in Thailand for me) and there was a heating unit, but it didn't work. There are also quite a lot of ants in the bathroom. The toilet was western, but you had to flush it like an Asian toilet (pour water in it) and there was no separate ceiling on the bathroom even though its walls are much shorter than those of your room. The effect is everything from the bathroom can be heard, smelled and felt (the moisture from the shower) clearly in the room - it's like a bahtroom stall within your room.

The decor on the halls was pretty much non-existant. The looks of the Queen Hotel was rather gloomy, but I don't mind that much at all. The staff wasn't particularly friendly, but not rude either.

The Queen Hotel is an option when boarding an early train, but other than that I'd leave it alone.