USD 103
Free cancellation until 25/09/21
Reserve now, pay at stay
View deal
Hotels.comUSD 103
PricelineUSD 103
Booking.comUSD 103
Trip.comUSD 103
FindHotelUSD 103
CheapTicketsUSD 103
View all 18 deals
Prices are provided by our partners, and reflect total costs of the stay, including all taxes and fees known to our partners. Please see our partners for more details.
Payments made by partners impact the order of prices displayed. Room types may vary.
Sarah S
Perth, Australia
4010

Buffet breakfast was nice, but after a few days it gets a bit repetitive - would have been nice to have a few different options to choose from each day.
Highly recommend the anti-pasto platter from Salsa Verde (Italian restaurant, offering beautiful views of the Indian Ocean), as well as the Salsa Bar (just above Salsa Verde), go here for a drink and watch the sunset!
I found that sometimes the room service was a bit slow, but always well presented and tasty.

We did request connecting rooms, instead we were given rooms 4457 & 4458 which are not connecting rooms, none offered views of the ocean, but were still lovely rooms - rooms were replenished twice a day (except on the last 2 days, only replenished in the morning. I think because more attention was given to the guests staying for a major conference at the resort).

Only issue with the rooms was that the telephone in 4458 smelt a bit like urine..

Overall, a very pleasant hotel to stay at - the resort offers different recreational activities each day, lovely gardens, very spacious areas, exceptional service and all of this is located in a very peaceful and relaxing area.More

Show less
See all 5,210 reviews
Payments made by partners impact the order of prices displayed. Room types may vary.
Nearby Hotels 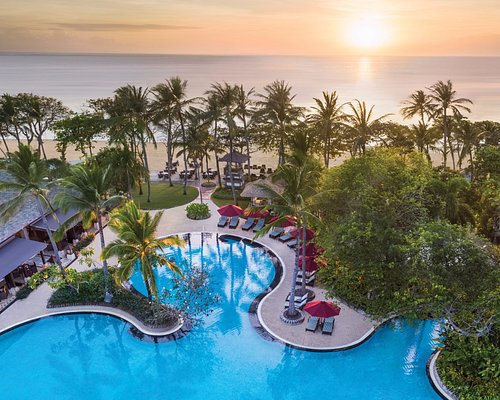 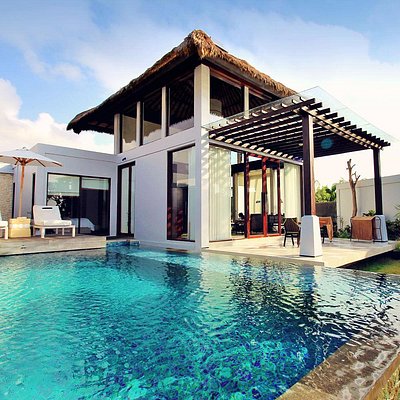 We were a family of five, including my daughter and son in law and two children aged just 6 and 3 yrs 8 months, staying for two weeks over the Christmas school holidays 2012. I booked connecting Ocean View Rooms and, after a bit of a hiccup upon arrival when we were allocated Garden Rooms, everything was sorted out satisfactorily and relatively quickly. The Ocean Rooms provided us with a lovely view over one of the many large lily pools where koi and large lizards and ducks and other birds coexist happily, and of course the sea. The children loved feeding the fish, and generally watching the wildlife activity. The connecting rooms worked wonderfully with the children. There was a daybed set up in a large alcove in each room, which provided flexibility with regard to the children's sleeping arrangements, and generally just extra space.

We were well placed, in rooms 3233 and 3234 in the South Village. We did not require lifts or have to change levels between the rooms and the main Lobby area, which was the main hub. There is a fair amount of walking to get from A to B, so the lightweight buggy we brought with us was extremely useful, and able to accommodate both children on many occasions, especially in the evening when they were tired.

Breakfast was also served in other restaurants in the resort, but we stuck to the Garden Cafe near the Lobby every day. An extensive range of food was offered buffet style, to suit all tastes - European and Asian. Food in foreign lands, ie not at home, can always be a bit of a problem with many children - not looking and tasting quite the same - and my grandson wasn't very adventurous. My granddaughter did at least give things a try. Anyway, that was not a fault of the hotel.

Throughout the resort there are several interlinking pools/lagoons with Frangipani trees creating welcome shade, and the frangipani flowers that floated into the pools was a pretty sight. One area had a longish waterside, which proved very popular with young and old. The pools are all 1.30m in depth, so buoyancy aids/supervision are essential for non or novice swimmers.

Food is available in the various restaurants, but obviously at international hotel prices. We ordered meals for the children whilst at the waterside at child friendly times, if it suited, which was relatively inexpensive, but we tended to have our meals at the shopping centre called Bali Collections, which was literally opposite the entrance to the hotel. Bali Collections is a collection of clothes shops, souvenir shops, small stores, supermarket, and many restaurants serving international cuisine, ATM facility, spas, etc. The restaurants were much cheaper than eating in the hotel, and good value for money. This whole area contains all the upmarket hotels, and so Bali Collections caters for them all. Just outside the area, but walking distance away, there are two little villages with shops and restaurants which are even cheaper. Well worth a visit. You could also take a taxi which costs next to nothing. Some restaurants offer to drive you back at no charge. There is also a laundry, which will wash, dry and iron and pack your clothes for a reasonable charge.

So everything in this protected and secure area of Nusa Dua is wonderful. The staff were all very pleasant and helpful, and I cannot fault anything about the Hotel experience.

BUT, you must be aware that traffic can be a nightmare. This is a real problem, and put us off venturing out to some places, as it is a real time consumer. Traffic between hotel and airport is particularly bad between 4.00 and 9.00pm - and I mean BAD. Kuta, a very popular area, is just a bit further on from the Airport, so everyone is on the same route. I could not believe how many scooters kept on passing us and filling up any gaps in the traffic, like a huge surge of water. On our journey from the hotel to the airport on our last day on 3 January, we left at 5.00pm and arrived at the airport check in for our 8.00pm flight at 7.20pm!! Our agent should have been aware of the traffic at this time and picked us up much earlier. His colleague at the airport was, luckily for us, on hand to whisk us through the many hoops to get us through check in, the various levels of security, and, of course, the Exit Tax payment desk. Tense moments, but we made it. If we had missed that flight, goodness knows what would have happened as flights were full for the next few days at least.

This review is the subjective opinion of a Tripadvisor member and not of TripAdvisor LLC.
mntraveler18
Stillwater, Minnesota
2028
Reviewed 8 January 2013
Beautiful grounds and excellent service!

The rooms are spacious and very comfortable. We had a room overlooking a garden area with a small pond. Very pretty! As we checked in we were offered a glass of of fresh squeezed orange juice and a cool washcloth. It was wonderful to have that extra pampering. There is a beautiful open air lobby surrounded by pools of water. The swimming pools are very pretty, and I loved walking the long sandy beach. Also loved all the trees along the beach so you could find a nice lounge chair in the shade. (Order a non-alcoholic blended ice... mint and lime drink. It was supurb!) The buffet breakfast was very good, and it was nice sitting there with a view of the pools and beach. You can arrange for a driver for the day at the hotel, which is helpful. We also had a name of a local driver, which they were happy to call for us. This was helpful because the driver didn't speak English very well. There is a large shopping area within walking distance. For everything else, you need to use a cab or hire a driver. The one negative issue was the road construction on Bali. It wasn't right by the hotel, but when we tried to tour other parts, it was very time consuming getting there due to slow traffic around construction areas. I don't know if other areas in Bali have road construction but between Nusa Dua and the airport area it was an issue. The roads are extremely busy and very slow in areas.
I would definitely stay at this hotel again.

This review is the subjective opinion of a Tripadvisor member and not of TripAdvisor LLC.
C4ZAH
Perth, Australia
13856
Reviewed 8 January 2013
Comfortable stay

This review is the subjective opinion of a Tripadvisor member and not of TripAdvisor LLC.
Pandemonium4
Mumbai, India
2812
Reviewed 7 January 2013
Great family hotel

We stayed at the Grand Hyatt Bali for a week over XMas. Summary - a little dated property, excellent if you have kids, and are ok staying in a 'large' hotel.

Location - in Nusa Dua. for those unfamiliar with Bali, Nusa Dua is a resort complex. So think of it like a gated community of big brand resorts. A little 'antiseptic' but if you have kids and don't plan to venture out too much, an excellent choice.

Property - is huge - like 500 rooms huge. So this means a lot of walking. I did not see anyone being ferried in a cart, so get ready to walk. The good news is that they have like 3-4 pools and the restaurants are also spread across the property.

Rooms - are 'dated'. Think 1990's wood stuff etc. But can't complain as the rooms are decent sized. We stayed at a grand club room, which means that you get a separate check in and also separate breakfast at the grand club lounge, which is not that crowded as the main breakfast are. There is also a pool reserved for grand club guests, but we didn't see too many people swimming in it. The main pools are large enough.

Restaurants - were ok. You will get bored soon, and in the Bali Collection shopping complex right outside the hotel, there are like 5-6 decent places to eat at like 30% of cost.

Other tips - plan day trips from the hotel, and use your own driver, if possible. (Just call the guy who picked you up, as he would charge you the hotel surcharge).

This review is the subjective opinion of a Tripadvisor member and not of TripAdvisor LLC.
csanda
Singapore, Singapore
539
Reviewed 7 January 2013
One star service running a four star hotel at five star prices

This review is the subjective opinion of a Tripadvisor member and not of TripAdvisor LLC.
View more reviews
PreviousNext
1…559560561…