USD 57
View deal
Booking.comUSD 56
ZenHotels.comUSD 184
eDreamsUSD 56
View all 17 deals
Prices are provided by our partners, and reflect total costs of the stay, including all taxes and fees known to our partners. Please see our partners for more details.
Payments made by partners impact the order of prices displayed. Room types may vary.
sanjay d
Maharagama, Sri Lanka
92

This Cozy Hotel has left the best impressions throughout every visit and every stay! Thanks to Malshan, Shehan and Jagath of Front Office Very courteous and always ready to accommodate my requests. Special Thanks to Richard who helped make this evening the best with his team. Eranga and Gayan very Hospitable always checking up on us. The food was delicious, presented beautifully and The view of Colombo Skyline from Cloud Red is Unmatched combined with it's lovely service. I recommend Red to everyone Close to me as I know You Guys  will Look after them Well during any visit! I would definitely visit  here again and again. Keep up the Good work guys!! More

Thank you for reviewing Cinnamon Red Colombo following your recent visit with us. It is always a pleasure to read reviews of satisfied guests.

Report response as inappropriateThank you. We appreciate your input.
This response is the subjective opinion of the management representative and not of TripAdvisor LLC
See all 3,044 reviews
Payments made by partners impact the order of prices displayed. Room types may vary.
Nearby Hotels 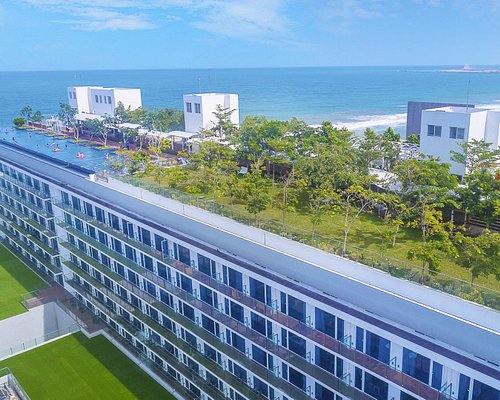 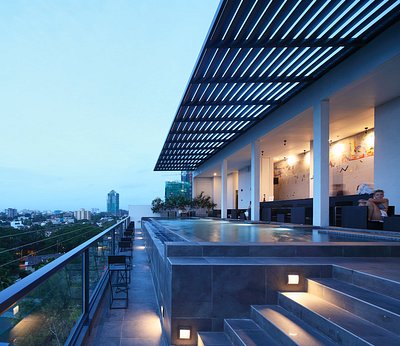 We were there for a casual outing for drinks. We ordered few cocktail and few bites. Cocktails were spelended. Waiters were so friendly, specially Kanishka and Randima were so helpful us. We ordered Long island ice tea and Bull Frog cocktail which was on happy hour discounted price. The cocktails had a good punch and food was up to standard as well. Really happy with the overall service. The only thing that we missed was the ambience which was not so great compared to a star class hotel.

Thank you for reviewing Cinnamon Red Colombo following your recent visit. It is always a pleasure to read reviews of satisfied guests.

Report response as inappropriateThank you. We appreciate your input.
This response is the subjective opinion of the management representative and not of TripAdvisor LLC
dr_nilusha
Colombo, Sri Lanka
15139
Reviewed 18 February 2021
Amazing pool and Room with scenery

We were there for just one night, but we got a nice room on the 23rd floor. Amazing. The sea view is breathtaking. The most amazing experience was the infinity pool. Really nice. We swam in the sunset scenery, enjoying really well.

However, I would give you 5 stars, if the breakfast was nice. The breakfast is terribly served. The WORST experience ever. Anyway, the room is nicely arranged.

Thank you for reviewing Cinnamon Red Colombo following your recent stay with us.

We apologize for the delay in serving the breakfast to your room and regret that the quality of the food you ordered, was not to your expectations. We would like to assure you that this is an exception and not the norm.

We are delighted you enjoyed your stay and our facilities, and we sincerely hope the delay in serving your breakfast will not dissuade you from staying with us, on a possible future visit.

We look forward to welcome you back.

Report response as inappropriateThank you. We appreciate your input.
This response is the subjective opinion of the management representative and not of TripAdvisor LLC
480shanthanp
Dehiwala-Mount Lavinia, Sri Lanka
197
Reviewed 25 January 2021 via mobile
Great Place

Went and stayed for three nights with my family.. it’s was such an amazing weekend . The food was fantastic . CloudRed rooftop bar was top of the range . Mr Yapa was very kind and explaining the special deals which I was not aware of . CloudRed waiter Sameera is such a wonderful person with great hospitality.

Thank you for choosing Cinnamon Red Colombo for your recent stay and for the positive review. We are delighted you enjoyed your stay and our facilities.

We look forward to welcome you back, on a possible future visit.

Report response as inappropriateThank you. We appreciate your input.
This response is the subjective opinion of the management representative and not of TripAdvisor LLC
Ursreusserch
2
Reviewed 19 January 2021
Great hotel

Cinnamon Red was for us a great experience, good food, very friendly staff and delicious breakfast and not to forget breathtaking rooftop bar with fantastic cocktails with a stunning view above Colombo skyline!

Thank you for reviewing Cinnamon Red Colombo following your recent stay with us. It is always a pleasure to read reviews of satisfied guests.

Report response as inappropriateThank you. We appreciate your input.
This response is the subjective opinion of the management representative and not of TripAdvisor LLC
ezhilinim
Colombo, Sri Lanka
71
Reviewed 3 January 2021 via mobile
View matter 👌🏽

I stayed in this hotel for two day and one night with my cousin on the 31st of December to celebrate New Year’s Eve! I was given a room on the 22nd floor of this 26 floor building. My room was fell under the category of sea view, which I requested them at the time of check in where they gracefully accepted my request! The name of the hotel CINNAMON RED was aptly seen from the entrance to the room where they mainly used the color RED for all sort of interiors such as floor carpets, corridors, wall decors, furniture and even curtains all around the hotel!

Room was spacious and ideal for two occupants. Room had a sofa which you can fold in to an easy chair where you can partially lie-down and enjoy the spectacular view of the city facing the Indian Ocean!

Room had all the facilities which I expected like in other cinnamon hotels other than the washroom maintenance!! The commode was leaking and there was a stain of dirt which was not that welcoming you for your private work to be done in there! Also we used to get bathrobes and walk in slippers from many other cinnamon hotels and they didn’t had any of that! One more negative which I noticed was the lack of supplies of cosmetics in the bathroom like body lotion, toothbrush and toothpaste! where u have to carry everything with you! They only had a shampoo and a body wash!

Other than the above tiny issues they had the amazing infinity pool on their rooftop which is situated on 26th floor with a breathtaking view is a must to try and get the experience! We visited in December which is a rainy month and we had a wonderful experience bathing in the pool with the shower of rain! They had New Year’s Eve party in their rooftop restaurant called “Cloud Red” which was so happening with amazing music in the background!

They do serve the food to your room if u wish to have it in your room. The breakfast was served in another restaurant of theirs called “Flavoured” where I got a little disappointment because they told us it’s gonna be a 4course meal instead of a buffet and just served us the Kiribath(milk rice) with some typical Srilankan curry and coconut water for dessert some fruits! I felt it’s not worth the money we paid for our breakfast! May be because it’s the new year they just served us the Kiribath, they also could have thought of people who don’t like to have Kiribath early in the morning!

Finally I had a good stay in this hotel, the room and the view from the room was so dreamy and the rooftop infinity pool was a wonderful experience which is a must to have!

Thank you for reviewing Cinnamon Red Colombo following your recent stay with us. We are glad that you enjoyed your stay and hope it was a memorable one.

We wish you had brought your concerns to our attention during your stay with us as if we would have offered a room change if necessary. We also regret that you were unaware of our "lean luxury" concept prior to your visit wherein the amenities offered are limited. However, the toiletries mentioned are available to be purchased via the vending machines accessible to our guests.

We do apologize that the traditional food served may not have been to your preference but wish to mention that the possibility of ordering other food options were available on request.

We look forward to welcome you back, in the not too distant future.

Report response as inappropriateThank you. We appreciate your input.
This response is the subjective opinion of the management representative and not of TripAdvisor LLC
View more reviews
PreviousNext
123…508