Golden Tulip Accra
Lowest prices for your stay
Lock in great prices from these sites
USD 143
Free cancellation until 01/07/21
Reserve now, pay at stay
View deal
eDreamsUSD 143
PricelineUSD 143
Agoda.comUSD 143
TripadvisorUSD 143
ZenHotels.com
StayForLong
View all 9 deals
Prices are provided by our partners, and reflect total costs of the stay, including all taxes and fees known to our partners. Please see our partners for more details.
Payments made by partners impact the order of prices displayed. Room types may vary.
Pritam B
2712

Facilities and Cleanliness: Overall i would rate them Average on Facilities and Cleanliness. Had to change my room since there was no Hot water in the shower which took them a day to change. The new room had a broken sink which never got repaired. They also have cottages (like private villas) however did not get to see any of those. Housekeeping does a good job to keep up the rooms everyday however the wear and tear of the hotel building is very evident. Cooling in the room is centrally controlled hence it can get very cold sometimes. Wi-fi Internet did not work for a day and on duty staff had no clue until i complained. Being on business trip Wi-fi is a must however i had to wait for a day to have it sorted. Network can be week if you are on 2nd floor.

Recreation: They have good recreation facilities including Swimming Pool which is very good for kids and families. Its got a poolside bar which is frequently visited by us foreigners making it a busy place especially during weekends.

Two tennis Courts on the other side of the hotel are well made and are open from 6am. You will see lot of local who are regular to these courts.
Warning: Though the hotel claims to provide you this service for free and also offer to provide you one of their staff if you are single to play with, be careful as the Hotel Boys asks for hefty TIPS to play with you. I was told that its a rule for the guest to pay Tip if he is playing single.

During weekends they also organize games for kids and you can see lot of kids in the hotel enjoying the same.

They also have few shops in the hotel if you wish to buy anything prices seemed to be high compared to markets.

Rooms: Rooms are spacious with King and Queen size beds and clean n neat linen.
Since internet is Wi-fi signal can be weak at times. they also have wired internet which is provided on request.

Show less
Room tip: Ask for Room no.102 which is facing the swimming pool.

Thank you for your constructive review of our hotel. We appreciate feedback such as these to enable us improve and offer guests a positive experience.

We have noted the concerns raised and will address them accordingly.

We look forward to welcoming you again.

Report response as inappropriateThank you. We appreciate your input.
This response is the subjective opinion of the management representative and not of TripAdvisor LLC
See all 644 reviews
Payments made by partners impact the order of prices displayed. Room types may vary.
Nearby Hotels 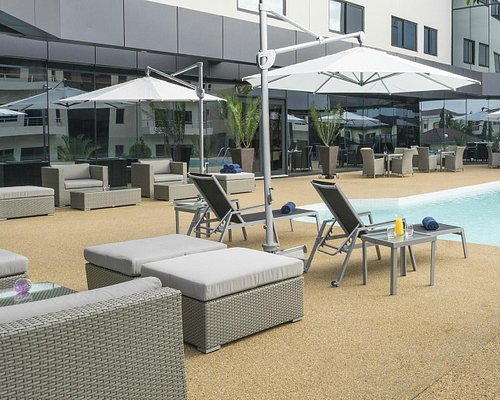 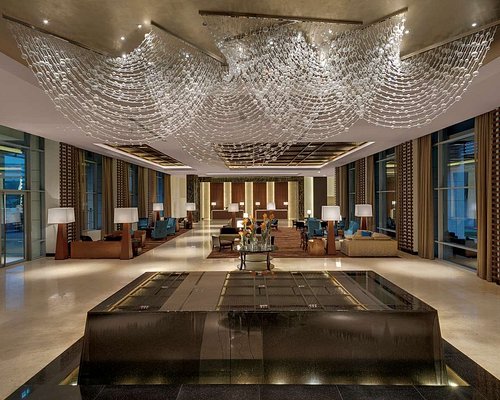 Great place....close to airport, bus station, local action.
Check out Takarodi..four hour bus trip...must visit Cape Coast...door of no return. Great hotels to stay overnight.
Must have a visa if you are an American.

Thanks for your review of our hotel. We are happy you had a good experience at our hotel and we look forward to seeing you again.

Report response as inappropriateThank you. We appreciate your input.
This response is the subjective opinion of the management representative and not of TripAdvisor LLC
SweetCocoa
London, United Kingdom
4720
Reviewed 18 February 2016 via mobile
Breakfast is a MUST

Every year when I visit Ghana I make sure that I make my way to the Golden Tulip for breakfast at least once!! My goodness the variety on offer is amazing and the freshness of the food is to die for! Just typing this review is bring back great memories!!

Thank you for your review of our hotel. We are delighted you enjoyed our breakfast and we look forward to seeing you again.

Report response as inappropriateThank you. We appreciate your input.
This response is the subjective opinion of the management representative and not of TripAdvisor LLC
jeremypearce
Pretoria, South Africa
4249
Reviewed 18 February 2016 via mobile
Working trip

Hotel stay varies depending on the room allocated. Airconditioning is a problem as you can only switch it on or off but cannot adjust the temperature sometimes too cold. Buffet can be expensive and not worth the money. Replenishing of items that run out is slow.Service at the restaurant is all about gratuities and this will decide how you are treated. Lovely swimming pool. Not all the hotel room windows have mosquito protection net. At night do not sit outside as a single bite could give you maleria. Not sure if these areas are fumigated. Breakfast has good variety something for everyone and is recommended. More can be done to keep corridors clean leading to rooms with a good daily vaccum. Bathroom cleanliness can be improved. Internet good depending on your room allocation.

Thank you for taking time to review our hotel. We have noted your concerns and will address them accordingly.

For your information, to ensure the comfort of our guests, the hotel regularly fumigates guest rooms once a month and the grounds twice a week in order to keep insects and mosquitoes away.

We look forward to welcoming you again and trust that your next stay with us will be a pleasurable one.

Report response as inappropriateThank you. We appreciate your input.
This response is the subjective opinion of the management representative and not of TripAdvisor LLC
Gezgin_39
Kocaeli
3120
Reviewed 16 February 2016
Good Hotel

I have been to Golden Tulip Accra Accra two times for business trips. It's near to the airport and you can see business people from all over the world.

Rooms are clean, but some can be noisy due to live music in the garden. If you love silence, tell it to the reception while check-in.

Thank you for your review of our hotel. We very much appreciate your positive feedback and will share your comments with our staff.

We look forward to welcoming you again.

Report response as inappropriateThank you. We appreciate your input.
This response is the subjective opinion of the management representative and not of TripAdvisor LLC
TimJayCee
Beaconsfield, United Kingdom
2220
Reviewed 10 February 2016
Plasant little oasis in a bustling city

Arrived at around ten pm, to find they'd lost the booking, so the booking procedure took far longer than was necessary Was not impressed with the reception staff, as they seemed to lack the knowledge and skills to trace bookings and deal with them. To be fair to them, I booked through NatWest your Points and eBookers, and it seems that the fault may well lie with the UK end. (Complaint is ongoing)
The room, when we finally got there, was excellent, had all mod cons, including a coffee maker as opposed to a kettle. The en-suite bathroom was okay, although the shower tened to flood the floor.. this seems to happen all over the world!
Breakfast was a buffet-style, and offered a good selection ranging from local through Europe and off to North America. There's no excuse to go hungry. Weekend breakfast witnessed an invasion into the buffet by many local people that turned a tranquil breakfast into a scrum.
Wifi was available everywhere, and the facilities of the hotel - tennis courts, well equipped gym and the business centre were all of a good standard. There were some retail shops within the complex. These were very expensive and cater for tourists with no idea that the same products can be bought from the cultural centre or local markets for a fraction of the cost.
The swimming pool was not as clean as it could have been. The food served by the pool was of a mediocre quality, also the music played around the pool was too loud and unnecessary,
We had the buffet-style evening meal, which was okay, but for the cost, I would have expected something far better.
I was not impressed with the 'struggling artists' that were permitted to try to badger guests within the hotel and grounds. One gets that on the beach and in other public places, so one should not get them pestering you in the hotel itself. The cynic in me feels that perhaps someone is paid to look the other way.
Overall, an adequate hotel, spoiled by a general lack of attention to detail. It could have been so much better. In perspective, for Ghana, this was a high quality, but for seasoned travellers from around the world, this would only rate three stars. The staff were polite, but some were rather grumpy. They seemed to give the impression that this was a high quality hotel and that you were privileged to be staying there. We later stayed at the Labadi Beach hotel,and of the two, the latter was far better.

We appreciate your objective observations on our services and facilities with thanks.

Our Central Reservations will be contacted regarding your booking which was not showing on our system at the time of your arrival. We apologise for the inconvenience.

Management will seize the opportunity to address the important points raised under service delivery and pool cleanliness without any further delay.

We thank you for your custom and appreciate your constructive feedback.

Report response as inappropriateThank you. We appreciate your input.
This response is the subjective opinion of the management representative and not of TripAdvisor LLC
View more reviews
PreviousNext
1…424344…