If you are looking something worse. You will not find other . Stay away - Review of Sheraton Agoura Hills Hotel

USD 170
Free cancellation until 24/04/21
Reserve now, pay at stay
View deal
Booking.comUSD 170
Expedia.comUSD 170
PricelineUSD 170
Hotels.comUSD 170
Agoda.comUSD 173
eDreamsUSD 170
View all 17 deals
Prices are provided by our partners, and reflect total costs of the stay, including all taxes and fees known to our partners. Please see our partners for more details.
Payments made by partners impact the order of prices displayed. Room types may vary.
monisame
argentina
4664

If you are looking something worse. You will not find other . Stay away

I am an elite member of the chain. I stopped at this hotel located in Aogora hills. The entrance was a disaster . The man attending the front desk is rude . He had a condescending behavior.
Not even say hello . Just asked for my credit car. The room was not clean at all. The. Sheets that covered the mattress was showing stains, I will said dirty, the carpet which covered the floors a disaster . No service at all , no bar open in , not even a bottle of water was offered unless you paid for it, plus the internet was not working either., I tried to get help with the issues but not help was offered since the rude man was the only person to attend all the guests. This property is a ghost placed in the middle of nothing . Some hotels should not open if they are not able to provide essential services, in this difficult times and a pandemic around . This hotel really needing an inspection .More

Show less
Trip type: Travelled on business
See all 616 reviews
Payments made by partners impact the order of prices displayed. Room types may vary.
Nearby Hotels 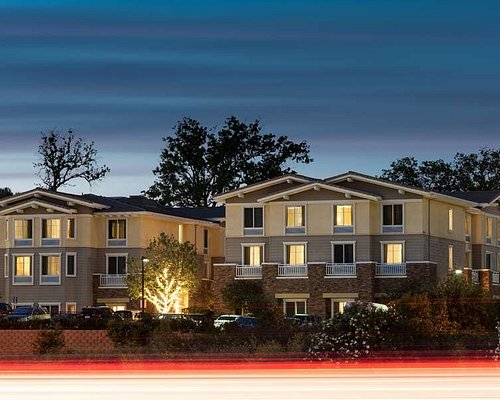 This is an older hotel, but thats ok. The rooms are actually nuce, but the staff is ways terrible. Ive stayed here twice and each time the staff is clueless and never gets things right.

The lounge was closed and nothing to make up for a Titanium Elite member. Never offered me a choice of welcome gift and when i called them on it, they "assumed you wantes the points."

There are much better, newer, more together hotels within a mile so i definitely wont be staying here again. And I'd recommend others consider different hotels as well. Just my opinion after multiple experiences.

This review is the subjective opinion of a TripAdvisor member and not of TripAdvisor LLC
nathanm8
Bacalar, Mexico
1
Reviewed 20 August 2020
Horrible Stay, Lying and Dishonest Management

Horrible property and rude staff. Was charged for WIFI despite being a rewards member. They promised to refund the charge through their accounting department. A week later when I went to check on the charge it still hadn't been refunded. A week later, they claimed they never said they would issue a refund and claimed that I purchased the high speed option but the receipt clearly says it was for regular internet which should have been complimentary. If I really purchased the high speed option, I would have been charged $30, so their story doesn't add up. They also claimed they showed me the invoice before charging me, but in reality, they only provided me a receipt after the charges were already made. This place also has poor sanitation standards, I would not trust it especially during a pandemic. Rude staff, this place is a dump, there are much better options in town.

Thank you for taking the time to share your thoughts regarding this issue. We appreciate you bringing it to our attention. We will share your message appropriately within the organization.

Report response as inappropriateThank you. We appreciate your input.
This response is the subjective opinion of the management representative and not of TripAdvisor LLC
E6007MOstacys
1
Reviewed 3 July 2020
lying

You still come up for pet friendly. I have stayed here for the past two years for the 4th of July to escape the noise. Your rooms aren't even nice and it isn't worth the money but now you want to lie to me and say you have never taken dogs in years. Honestly learn to be upfront with people and stop lying. It shows in the reviews and I literally have photos at this hotel with my dogs. It was always a 75 deposit and last year there were so many dogs... way to be horrible to your customers

Thanks for staying with us. We appreciate your feedback!

Report response as inappropriateThank you. We appreciate your input.
This response is the subjective opinion of the management representative and not of TripAdvisor LLC
Mami1432
1
Reviewed 2 March 2020
Worst hotel I’ve ever stayed at

This is a horrible hotel, run down and overpriced especially for a Sheraton. Rooms are disgusting and carpet is so old and nasty. Never stay here!!!!! Can’t believe people give it good reviews. The pictures don’t look like the hotel.

Thanks for staying with us. We appreciate your feedback!

Report response as inappropriateThank you. We appreciate your input.
This response is the subjective opinion of the management representative and not of TripAdvisor LLC
Econouvelle
Los Angeles, California
5135
Reviewed 21 January 2020
Agoura Getaway

This Sheraton enjoys a nice location between Agoura and Westlake Village. Located right off the 101 freeway, it's only a short drive to many good restaurants and bars. The nearby IHOP is open 24 hours. Islands is another family-friendly restaurant nearby. For couples I would suggest Nonna's in Westlake or Stonehaus for small plates and wine. The Old Place is a popular weekend spot in Agoura.
There is good hiking nearby and the beach is one scenic drive away. Others might prefer a leisurely stroll along the lake in Westlake or browsing for bargain books at the Agoura library Saturday book sale.
My room at the Sheraton was comfortable, with thick mattresses, downy pillows and a roomy bathroom. The newly installed LG flatscreen TV was huge compared to my home TV. I appreciated the good lighting for reading and good-sized refrigerator for restaurant leftovers.
I didn't use the pool or fitness room but did notice a nice variety of equipment in the fitness room (though a bit crowded). The public areas were fine and there was complimentary coffee at the lobby level, supplementing the in-room Starbucks.
Having stayed at many Sheraton hotels I was expecting better maintenance. One of the outdoor steps to the lobby was broken. Some paint/cement was missing from an outdoor wall going toward the conference rooms. Also, there were some holes in my bathroom wall where something once hung but was not replaced. The exterior paint colors seemed out of line for the Sheraton image, but maybe the image is changing?
Overall I think the hotel is a good choice for a short stay.

Thank you for choosing the Sheraton Agoura Hills Hotel for your recent travels to Agoura Hills.

Commitment to service and guest satisfaction is a main focus and we are delighted to hear you are enjoying your stay. The pride and dedication our hotel team takes in providing exceptional customer service and best product to our valued guests speaks strongly to our company’s core values.

Report response as inappropriateThank you. We appreciate your input.
This response is the subjective opinion of the management representative and not of TripAdvisor LLC
View more reviews
PreviousNext
12…103