Not best value for money - Review of Adara St Kilda

USD 76
View deal
Free cancellation until 23/04/21
Hotels.comUSD 77
Expedia.comUSD 77
eDreamsUSD 77
View all 16 deals
Prices are provided by our partners, and reflect total costs of the stay, including all taxes and fees known to our partners. Please see our partners for more details.
Payments made by partners impact the order of prices displayed. Room types may vary.
Michael-4551
Caloundra, Australia
26103365

Not best value for money

Stayed from Sunday 9th February to Thursday 13th February for 4 nights in a one bedroom apartment. It had everything we needed even a washing machine and dryer. The room was serviced daily, would much preferred not to have had that and have room at a reduced price instead. Handy locate and paid extra $15 per day for secured undercover parking. We had Unit 101 which was above Aldi delivery area and was woken early with deliveries. We could also hear their air conditioning units which were on the end wall of our room. If we stay there again we will definitely be asking to be given a room away from that noise and smell.

We have stayed there before in a studio room for one night and found the room to be very small so this time booked one bedroom which is well worth doing even for one night.

Since Adara have taken it over level of maintenance and cleaning has dropped so not the best value for money around Melbourne.More

Show less
See all 373 reviews
Payments made by partners impact the order of prices displayed. Room types may vary.
Nearby Hotels 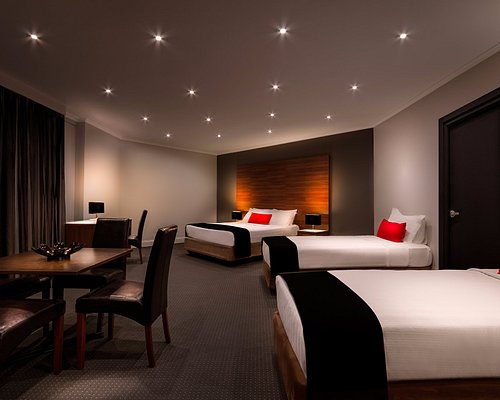 I have stayed in many apartments and hotels during my travels, but this is the nosiest by far. People come and go at all hours, and talk and call out with complete disregard that some people at 4 am may actually be asleep. So if you want a quiet place to unwind, this definitely isn't it!

This review is the subjective opinion of a TripAdvisor member and not of TripAdvisor LLC
Lauren S
Canberra
10833
Reviewed 4 March 2020
Good price, could use some love

Stayed recently for one night, and likely if I hadn't gotten such a good deal or was staying longer I may have stayed elsewhere. The room was quite well set up, however could really use some extra attention to detail on the cleaning as well as a new coat of paint. Located in an apartment block and right next to Aldi so would be convenient if you were using the apartment as a living base. Reception only open limited hours, which for quite an 'independent' traveller is no issue at all.

This review is the subjective opinion of a TripAdvisor member and not of TripAdvisor LLC
happykat2018
Townsville, Australia
1414
Reviewed 2 March 2020
happy with stay

Stayed 2 nights, friendly staff, nice room ( Deluxe ). Good location.
One down side, took nearly 5 weeks to get my deposit back, after numerus phone calls, and trips to the bank, i finally recieved the deposit back

This review is the subjective opinion of a TripAdvisor member and not of TripAdvisor LLC
Elizabeth_C574
Sydney, Australia
8160
Reviewed 27 January 2020
Very dirty and very disappointing

We booked 2 rooms for 3 nights at this serviced apartment and the website is misleading as it shows kitchen and laundry facilities and is not clear this doesn't apply to 'studios'. Beware 'studio' rooms are tiny with NO facilities. We thought 'studio' meant self contained as it does in real estate and 'serviced' meant cleaned!

We had a 'studio' room best described as a cave! No room for a suitcase except on the bed, no inside chair etc. The 'throw' blanket stank and the show cushions smelt and were stained.had stains The bed was soft and spongey and dipped in the middle.

The outside area, like the entry to the 'studio' was filthy with litter which had had accumulated over time.

The bathroom was a good size, the water pressure awful, worst there was a lot of mould in the shower recess. There is NO excuse for this other than laziness.

The air conditioner was very noisy and when it was last serviced?

Room 'service' - or total lack of! NO proper bed making, washing or changing cups, saucers or glasses, wiping the basin, puffing up the pillows, vacuuming, or cleaning the filthy entry area.

After a dust storm there was red dust everywhere and no one cleaned it up.

There is a climate of indifference and laziness. Wake up and do it properly Adara.

This review is the subjective opinion of a TripAdvisor member and not of TripAdvisor LLC
Jackieortega
Falmouth, United Kingdom
2028
Reviewed 27 January 2020
Adara St Kilda

Stayed here for 1 night whilst meeting some family ..It is a great location on Inkerman Street just next to an Aldi supermarket..The reception staff were excellent and very helpful sorting out a taxi for us early morning. The apartment had everything we needed..with washing machine and drier. The bed was extremely comfortable .Would definitely stay here again and recommend to friends.