We had an overnight stopover at the boulevard lodge , and found the decor to be in desperate need of an upgrade , the room is starting to look quite shabby, the swimming pool is smack bang in the middle of a car park ( quite a strange set up ) and is really the size of a small pond .
Many other options in Bundaberg , and this one one has no redeeming features , give this place a miss

Trip type: Travelled as a couple
See all 69 reviews
Payments made by partners impact the order of prices displayed. Room types may vary.
Nearby Hotels 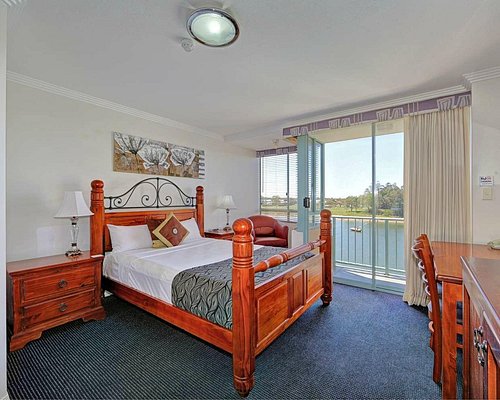 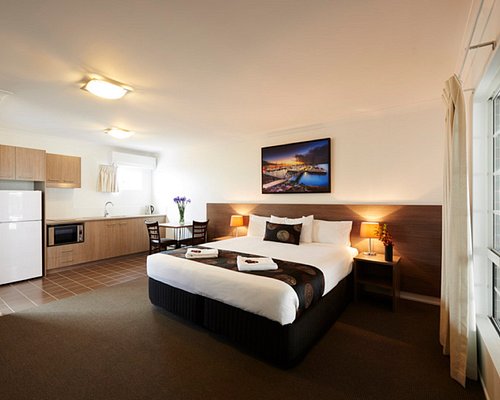 This is a real shame to leave a review like this in the current climate :(

The rooms itself were clean and spacious however unfortunately they lack any form of soundproofing.

We arrived at 2pm after a very early start. We were very tired and hoping to get a rest before a function that night. I have a brain aneurysm and get terrible headaches.

Unfortunately for us, several families were staying in the motel who had no respect for other patrons.

We have had children and my husband and I understand children need to let off steam after travel however there are parks to take children rather than parents sitting around drinking and letting their kids run up and down stairs and around outside the rooms, screaming, yelling and shouting . Total disrespect!

After an hour of this behaviour and trying to sleep ( we were patient) I called reception who offered to move us, and advised she would call and say something to the parents (however she also advised me that it was during the day that the noise was being made) - in other words it wasn’t really an issue for her because it was daylight hours.

Motel are a place to sleep and break travel and people keep different and unusual hours and travel at different times... some leave at 4am some leave at 9 or 10am, therefore I felt after an hour of trying to rest it was reasonable to call management.

It was pointless moving rooms as we were going out to the function at 6pm- we just wanted a nap before going out) and sadly we did not get this luxury.

I did not want an entire room to have to be cleaned ....to move us to the other side of the motel ( because we are reasonable people) and in any case this wouldn’t have helped because the children were so loud they would have been heard from anywhere in the motel.

Seems management mentioned it to the parents as after this the children were noisier. A father even commented to a child who was trying to be as loud as possible “ River, you can’t do that because people are sleeping”.
The father seemed to think it was a bit of a joke.

I am certain if we came back to the motel at 10pm and slammed doors and yelled out when people were sleeping, to get an early start the parents would complain and management would stop us doing it. I’m sure we would be told it is unacceptable ( simply because of the different time of day)

I was told 5 families with children were staying in the motel for a funeral. I’m not sure if that was supposed to make me feel sorry for the other guests and think they should let their kids run riot?
I’ve travelled for funerals and have not let my children misbehave in that manner, as we rent A ROOM not the whole motel.

I am not sure if the video will upload and play, but if you want a motel that will actually ensure guests are courteous to others ... try elsewhere.

It’s a shame about the rooms not being soundproof you block out noise because the facilities are quite nice.

People should be reminded they have rented a room only. Management might try going into one of the rooms and listening to what the guests hear.

Once something is said to parents about noise... it would be a good idea to follow up that the children are being supervised.

This review is the subjective opinion of a TripAdvisor member and not of TripAdvisor LLC
Kev M
Rockhampton, Australia
2
Reviewed 4 December 2019
Reasonable for regional Qld

This review is the subjective opinion of a TripAdvisor member and not of TripAdvisor LLC
750PeterK
Brisbane, Australia
9522
Reviewed 4 August 2019 via mobile
Conference Accommodation

Easy check in / check out

This review is the subjective opinion of a TripAdvisor member and not of TripAdvisor LLC
blossompossum1
Brisbane, Australia
4713
Reviewed 10 July 2019 via mobile
Very friendly manager

Very average small town style motel room that I’m used to growing up to. The lady who is the manager is one of the nicest people in customer service - she went out of her way to ensure that we comfortable and even upgraded us to a king room. Thank you.

This review is the subjective opinion of a TripAdvisor member and not of TripAdvisor LLC
73narelleh
Yeppoon, Australia
294
Reviewed 3 June 2019 via mobile
Not my first choice in Bundy.

Speedy check in, basic room with slightly tired decor where nothing really matches. Comfy bed, spoilt a little by the noisy fridge and hard to adjust shower. Boiling hot or freezing cold, nothing in between. I much prefer staying at other accommodation when I come to Bundaberg.