We were surprised - Review of Comfort Hotel East Melbourne

Comfort Hotel East Melbourne
Comfort Hotel East Melbourne
Lowest prices for your stay
Lock in great prices from these sites
USD 82
Free cancellation until 29/10/21
View deal
PricelineUSD 82
eDreamsUSD 82
getaroom.comUSD 85
Trip.comUSD 88
ZenHotels.comUSD 82
TripadvisorUSD 82
View all 14 deals
Prices are provided by our partners for one room, with variable occupancy rules as provided by the property, and reflect total costs of the stay, including all taxes and fees known to our partners. Please see our partners for more details.
Payments made by partners impact the order of prices displayed. Room types may vary.
galtripper
Anglesea, Australia
5645

Look, we were surprised. From the outside and in reception it looked like an ordinary motel, a bit shabby one at that. But our room was a delight - two queen size beds, sitting area, and a fabulous recently upgraded bathroom. Spotlessly clean too. We will stay there again. Oh, I forgot to mention the free parking!

Trip type: Travelled as a couple
See all 162 reviews
Payments made by partners impact the order of prices displayed. Room types may vary.
Nearby Hotels 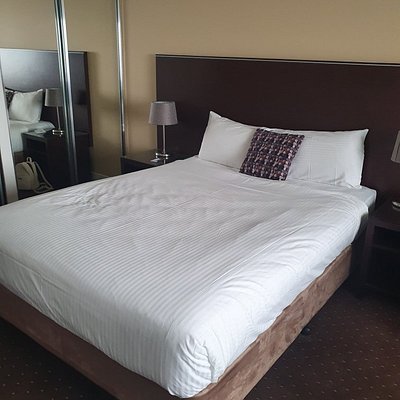 Great rooms, clean, comfortable and friendly staff. Parking available no cost, which is a bonus for this area. Within walking distance to MCG, great for sport or concerts. Windows open which is great for those that love some fresh air :)

This review is the subjective opinion of a Tripadvisor member and not of TripAdvisor LLC.
992ciaranh
Sydney, Australia
7638
Reviewed 21 November 2018
Average hotel for the price.

The room was clean and spacious which were the positives. The hotel has pretty basic facilities. The bathroom is really dated and the shower is awful. The pressure is so low and its really hard to get the temperature right. Its also really low, small and awkward to get into.

I dont think I would stay here again.

This review is the subjective opinion of a Tripadvisor member and not of TripAdvisor LLC.
Cranium59
Brisbane, Australia
6437
Reviewed 4 November 2018 via mobile
Superb Location

We stayed at the Comfort Hotel for 3 nights while visiting family members who lived in the eastern suburbs.

The off-Street parking was limited but we managed to get a spot every night of our stay.

Pleased that all the rooms have been renovated and our room featured a lounge and both single and double beds.

We loved the location as we could walk every morning around Yarra Park, Fitzroy Gardens and the Yarra River walk from North Richmond into the city.

The local IGA supermarket is close by and was a favourite for their fresh croissants in the morning.

Our only complaints was the high step up into the shower.

Will definitely return when we visit Melbourne next.

This review is the subjective opinion of a Tripadvisor member and not of TripAdvisor LLC.
MOKROK
Greensborough, Australia
4351
Reviewed 23 September 2018 via mobile
Perfect for the MCG

For the price you can’t complain. Clean, close to the MCG, friendly staff and good size room. It’s not the Hilton, but does what it needs to do.

Some parking available at the back and walking distance to some cafes and McDonald’s.

This review is the subjective opinion of a Tripadvisor member and not of TripAdvisor LLC.
955caitlynh
Melbourne, Australia
2623
Reviewed 22 September 2018 via mobile
Very, very poorly run hotel

We arrived late to this hotel after the footy on Friday night, and checked in via the keypad as their check in hours ended at 7pm. Upon arrival, the room looked nice. But when we looked further, we were horrified at the condition that housekeeping had left this room in. We should have known this by the way there were stains in the hallways as we walked up to our room.
We opened the fridge to get out milk to have a cup of tea, and were shocked to find an already opened carton of milk from the previous people.
Next, in the morning, we went to have a shower and in the light of day saw hairs in the bathtub and on the sink. Mound surrounded the bath tub and glass wall. There was no bar of soap, and somebody’s already used bar of soap was still in the soap holder.
I called reception and asked for a new milk and new bar of soap, and was told somebody would be up at 9am (I called at 8:30am, when reception opened).
Pretty poor that we have to wait until 9am to have a cup of tea and a shower, considering we have to check out at 10am.
Never staying here again.

This review is the subjective opinion of a Tripadvisor member and not of TripAdvisor LLC.
View more reviews
PreviousNext
1…567…