Always a pleasure ! Restaurant and services are great ! - Review of Paradise Kings Club

Destinia.com
Priceline
Prices are provided by our partners, and reflect total costs of the stay, including all taxes and fees known to our partners. Please see our partners for more details.
Payments made by partners impact the order of prices displayed. Room types may vary.
Bia Lupoli E
London, United Kingdom
108

Always a pleasure ! Restaurant and services are great !

we own a week at the resort - always very clean and the staff are very prompt and attentive.
Near the Unesco Heritage Site - but a bit of a walk to the city and harbor , but taxis are very cheap.
The restaurant Owners (in the resort ) are wonderful hosts and the food is simply delicious.

See all 260 reviews
Payments made by partners impact the order of prices displayed. Room types may vary.
Nearby Hotels 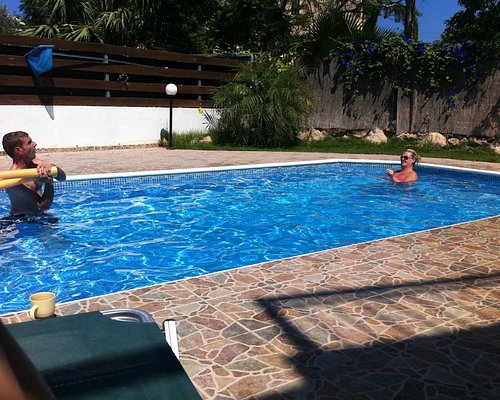 We read quite a few positive reviews about the resort but these must be regular return holiday makers .. We was given a room with out a veiw facing the back of the restraunt so you get the staff hanging out the back door having a smoke. Your only given one key so if there's more then 2 couples your kind of stuck, Then your given a large wallet with all the remotes for aircon dvd tv ect. The dvd remote had the battrey cover missing and it was filthy keys and bezzel covered in sort of gunk a clean wouldn't go a miss! The rooms have what you need for self catering but the cooker hood fan was not working. just be aware if your flights are late arriving or early they dont supply any complementary bottles of water or coffe/tea sachets which in all my years of travel this is a first! They have a mini market on site. There's a lidl just about a 5 min drive i suggest you get a few bits from there. You have a outdoor pool with bar but the maintenance around the pool is very unacceptable cheap weights holding the cheap sun brollies broken with sharp plastic exposed bolt missning from the hand rail in swimming pool and mosaic tiles missing around jacuzzi area of pool which is sharp. The drainage cover around the pool is dirty and crubling this needs replacing the pool toilet has no lock so if you need the loo put a door behind the door . The bar / terverna has very uncomfortable cheap plastic seating the sort you expect in a creasy spoon in the uk this could be an awsome place to sit and relax if there was a bit more imagination like ratten furniture with comfy cusions they might get more people using the area. the complex is designed backwoods! wifi is only available in reception and it is restricted to the reception you can't pick it up once you past the doors ! Least it's free i guess. Hire a car your need it to get about

This review is the subjective opinion of a TripAdvisor member and not of TripAdvisor LLC
Ted L
Bolton, Connecticut
11069
Reviewed 2 January 2016
Excellent exchange, well appointed resport

We stayed here on an RCI exchange and were very pleased. The resort has definitely earned its Gold Crown status.

We arrived very late after driving from Larnaca and at check in, the desk clerk called the restaurant to make sure they would stay open a short while so we could come and get something to eat.

Our one bedroom unit was well appointed and perfect for a couple. The balconies at this resort are nothing short of amazing as they are not the tiny little balconies one would expect but very spacious. Every unit gets a full day of sun on the balcony with magnificent views of the sea. We had breakfast very morning outside in the sun and enjoyed many amazing sunsets. The only downside was the day was too short but that was because of December and not the resort's fault!

There is a mini market onsite as well as a bar/lounge. A full grocery is a short way down the highway.

The location is well situated for beach, trips into Paphos, wine country excursions or off into the Akamas area.

Reception stocks DVDs as well as books which can be borrowed at no charge and we found this a nice touch.

Wireless is not available in the units although is widely available in reception and the other common areas such as the health club. Some may find this a negative although we enjoyed being unplugged for the week.

Both the indoor and outdoor pools were open and we used both. The outdoor was still great for sunbathing although a bit chilly when swimming. The indoor pool has a full health club, sauna, steam room as well as spa services.

We highly recommend staying here in the off season if in search of a sunny, quiet retreat and would also consider during the high season since the property and units are so superb.

This review is the subjective opinion of a TripAdvisor member and not of TripAdvisor LLC
RandD21
Birmingham, United Kingdom
22
Reviewed 29 December 2015
Nice apartment, shame about the location, and the noise...

We were hoping for a nice relaxing week in Paradise, but this was far from it!

We arrived the day before Christmas eve, around 6pm, the taxi driver had a bit of trouble finding the place as it is right on the outskirts of Paphos and the sign to the resort isn't that obvious from the main road. If you're travelling from Paphos airport the cost is around 35 Euro, Larnaca is around 100 Euro. Ideally you need a car for this resort, but more on that later.

Check-in was quick and painless, but with the holiday being an RCI Exchange we were charged the 70 Euro utility fee upfront, which luckily we already knew about. We were assigned an apartment in the upper floor of B block, which had views of the sea and parts of Paphos, and also the road in front of the resort. This road is extremely noisy, as although it is signed as a 'Private Road' the locals use it as a rat run into the neighbouring areas of Paphos.

The apartment itself was fantastic. Everything was extremely clean - there were two bedrooms, one with an ensuite, a large family bathroom, a large terrace and a kitchen/lounge/diner. Nothing was provided in the way of milk/tea/coffee etc., so we couldn't even make a drink when we got there. The onsite minimarket had closed at 4pm, so we were left with no choice but to walk to the nearest shop (Lidl), which was around a mile away on the main road back towards Paphos. I feel the resort could have made more of an effort here for people arriving on later flights (it wasn't just us who arrived after 6). As I said earlier, due to the resort's remote location you do need a car if you want to do anything. There is a bus service that stops at the end of the road that runs between Coral Beach & Paphos, but that only runs until around 7pm.

We only ate in the resort restaurant once during our stay. The food was OK, nothing spectacular. Pitta bread and dips to start, then lamb and fried cod for mains. When we asked for Nescafe coffee from the menu, I wasn't expecting to be given two sachets of coffee and a pot of hot water - maybe it's a local thing?!

As I mentioned at the start of my review, the holiday was far from relaxing, this was due to the noise in the resort, and not just from the road. The family in the apartment next door had a small child which treated the balcony between us as an extension to their living space. The people below us arrived back late each evening (around 11pm) and left the air-con unit on all night, which reverberated through our main bedroom as we were directly above it. We did voice our concerns to the staff on reception and asked if we could be moved to another unit (I estimated the resort was over 75% empty) but was told rather curtly this was not possible. We asked again the following day and was told by a more helpful member of staff that there may be an apartment available later in the week, but couldn't guarantee it would be any better.

We therefore decided to leave four days early rather than endure the noise any longer.

This review is the subjective opinion of a TripAdvisor member and not of TripAdvisor LLC
jillandbarry
hemel hempstead
147115
Reviewed 18 November 2015
Paradise!!

Another lovely holiday in this place.
Just as good as the last few years.
Restaurant excellent with Andreas, George and Victoria.
Had a really good time at the bbq.
Maid service very good.
Can't wait to go back next year

This review is the subjective opinion of a TripAdvisor member and not of TripAdvisor LLC
970derekh
West Wickham, Kent
196
Reviewed 2 November 2015 via mobile
Wonderful location

An excellently kept resort with a wonderful restaurant and 2 very good outdoor pools as
well as an indoor pool. The staff are very helpful and the only drawback is that they do not have enough people staying.
It is close to the main town and beaches and is well served by local buses.