We spent the night at this hotel as we were spending 2 days at Alton towers, the building looks a little dull, not what I expected when we first arrived, staff were very polite and helpful. Shame they weren’t doing any breakfasts due to COVID-19, As that’s something I like to have the next morning at a hotel. The rooms were dull and outdated, however slept comfortably. Just before midnight the people above us were shouting, talking really loud and allowing their child to jump from the bed onto the floor which I thought at one point they were gonna come through! and slamming their door.. obviously had a few to drink and were very inconsiderate to the people around them But they were travellers so what do you expect.. Got annoyed so rang reception told them what was going on, although I think he knew because the kids were running around like menaces earlier that evening and their kind were just being nuisance’s. Apparently there was a traveller’s wedding the night before and they were causing a few issues. The gentleman said he will move us to much quieter room, and he did so quickly! Which we were grateful for.. Got a decent nights sleep ready for day 2 at Alton Towers.More

Thank you for your review following your recent stay with us, please accept my sincere apologies for the disturbance due to noise form other hotel residents, we do try hard to prevent noise disturbance to guests, it is pleasing to read that the staff were able to assist with moving you to a quieter room.
We are currently reviewing our Breakfast options so hope to have Hot items available soon.

I do hope you will consider staying with us in the future.

Report response as inappropriateThank you. We appreciate your input.
This response is the subjective opinion of the management representative and not of TripAdvisor LLC
See all 1,511 reviews
Payments made by partners impact the order of prices displayed. Room types may vary.
Nearby Hotels 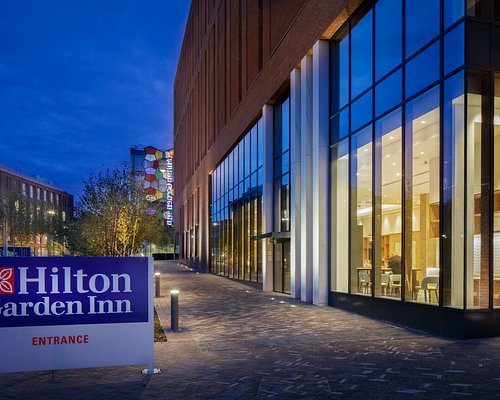 Very friendly Hotel. Rooms clean and everything you need. Special thanks to Kayann who went above and beyond during our stay to make sure everything was perfect. A great credit to the team.
Reasonable price too . Highly recommended

Thank you for your lovely 5 star review, I am delighted your stay was so enjoyable and that the team looked after you so well.
I will be sure to pass on your feed back to Kayanne.

I do hope we can welcome you back again soon.

Report response as inappropriateThank you. We appreciate your input.
This response is the subjective opinion of the management representative and not of TripAdvisor LLC
L_P_O_20
United Kingdom
3
Reviewed 16 October 2020 via mobile
Never Again

I stayed in this hotel with a friend in September 2020. The hotel should be an ideal location but it's really not. It attracts low lifes and questionable people to say the least. Admittedly for this price, not sure what I was expecting but it was a real eye opener. Some of the staff were nice and polite though.

Thank you for taking the time to review your recent stay with us here at Best Western City Centre Hotel. I can only apologise for the hotels location failing to exceed your expectations.
I thank you for your comment about our team members, it is disappointing you did not discuss your experience during your stay.

I do hope you will consider staying with us in the future as I feel your experience is not indicative or a true reflection of our business.

Report response as inappropriateThank you. We appreciate your input.
This response is the subjective opinion of the management representative and not of TripAdvisor LLC
jenniebrodie
1
Reviewed 5 October 2020
Cleanliness lacking

Firstly let me say the staff were really friendly and helpful.
On arrival the first room I had was dated and carpets very marked. Next morning I asked to be moved and when I returned I had a new room key ready for me. The room looked like it had recently been refurbished and I was pleased. I then went to run a bath and found the plug hole full of hairs . Absolutely disgusting. I showed the receptionist in the morning and she apologised and said the domestic manager was in the next day and she would get her to call if I wanted her to, I said no as I was going to and have emailed the hotel (no response as yet to my email).

When I arrived on the Sunday there was a bottle wrapper and a false nail in the lift, when I left on Tuesday both were still there. Given current health circumstances this is unacceptable!

Thank you for taking the time to review your recent stay with us, we are part way through our scheduled Bedroom improvements, with 50 rooms remaining, I am pleased that you like the upgraded room as this is the style we are opting for with our refurbishments. I am disappointed to read your comments about cleanliness, we have failed to meet our usually high standards for which I can only apologise, Please be assured the matter will be dealt with by our Housekeeping Manager.

I do hope you will consider staying with us in the future, please do not hesitate to contact me and i will assure you a superior stay.
Kind Regards

Report response as inappropriateThank you. We appreciate your input.
This response is the subjective opinion of the management representative and not of TripAdvisor LLC
richardbL3453VL
Stoke-on-Trent, United Kingdom
116
Reviewed 20 September 2020 via mobile
The worst hotel ever !!!

Stopped here for four nights on business, never again the hotels idea of protecting its guests from COVID-19 are 1 towels only changed every five days
2 bin in room not emptied
3 beds not changed
4rooms cleaned every 5 days
5 charge to use room service £5 to bring the limited menu to your room
These measures are to reduce costs be honest and don’t blame COVID-19!!! Non of the staff wearing masks not a problem to me but double standards
Hopefully the Moat House reopens soon !!
Don’t mean to be mean but it’s just my opinion

Thank you for taking the time to review your recent stay with us, Please accept my sincere apologises for failing to exceed your expectations during your stay.
Covid -19 has unfortunately put tremendous strain on the Hospitality Industry and as such we have had to adapt our operating procedures to ensure every effort is made to ensure the safety of our Guests and our team members.
This includes the reduced housekeeping service for guests staying more than one night, This is outlined in each bedroom in a letter and offers housekeeping services and additional supplementary items upon request, this is to limit the contact between the team and our guests. All of our team are supplied with PPE and masks are worn by all team members. As guidelines are changing frequently we hope to be returning to our usual daily services.

I do hope you will consider staying with us again, please do contact us directly and I will ensure you a superior stay.

Report response as inappropriateThank you. We appreciate your input.
This response is the subjective opinion of the management representative and not of TripAdvisor LLC
Rikihoa
Kettering, United Kingdom
41
Reviewed 13 September 2020 via mobile
Basic but clean and central location

Stopped here for the weekend before taking my son back to uni. Good central location with easy access to shops, restaurants and bus station. We got a good deal which worked out around £40 per night including breakfast for the two of us. Hotel maybe a little tired but our twin room had comfy beds, a couple of armchairs, dressing table and TV. Perfectly adequate facilities. No problem with the shower, unlike other people seem to have had, but it’s a mixer not an electric shower. Most guests wearing face coverings but hotel was pretty quiet anyway, apart from at night when we had to close our window at midnight because of the noisy conversation from a room upstairs! Grab and Go breakfast was very generous and collected from Reception after 6am. Would stay here again. Found the Reception staff to be friendly and helpful. Thank you.

Thank you for your lovely review, I am delighted you found the room comfortable for your needs, i do hope we can become your hotel of choice when you next visit your Son at University.
Please do contact us directly and we will be sure to offer you our very best rate.

We look forward to welcoming you back again soon

Report response as inappropriateThank you. We appreciate your input.
This response is the subjective opinion of the management representative and not of TripAdvisor LLC
View more reviews
PreviousNext
123…252