Kind of a step back in time

Review of Gran Hotel Balneario
Reviewed 13 May 2019 via mobile

Between the fairly old clientele headed for their spa or soak and the general feel of the hotel and town, it seems like you’ve fallen into a nice time warp taking you back a few decades.

The service and food were both very good. Only complaint was that the shutters on the windows clattered all night which made for a fitful sleep.

Room was comfortable, if a bit small.

Note to walkers - the entire town shuts down (like many Spanish towns) from 2-5 and there is no way to purchase anything.

Breakfast was pretty good in that there was ample fruit, a variety of meats, and several juices.

Trip type: Travelled solo
See all 35 reviews
Payments made by partners impact the order of prices displayed. Room types may vary.
Nearby Hotels 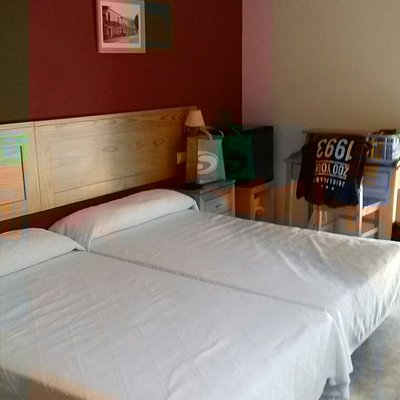 We took the Spa circuit (jacuzzi, showers/sprays, various saunas, swimming pool) at the Montemayor Spa to try out the thermal waters. It cost 26 Euros / person for the hour plus free time swimming time in the pool at the end. We did not try the hotel, but only went for the Spa circuit.

The experience was OK, but I am not sure that I would be motivated to repeat it, due to the non-cheap price. I also personally prefer to have free access to all the amenities, and not be ferried on a timetable from one place to another. I personally prefer to be able to choose where I go and how long I stay. The pool visit with the spring water was an exception since we could stay as long as we wanted, but even the showers in the pool area are restricted to an attendant having to turn them on. I am on the fence with this one, as to whether I would return again. It had both good and less good points.

We were given bathing caps, and robes made of cotton but not terry cloth. We provided our own slippers and towels.

The music in the changing rooms was distorted. Aside from that it was OK.

The circuit consisted of several approx. 10 minute treatments for a total of an hour.

-First we went to a jacuzzi shared poor with thermal sulfur water for 15 minutes. It was fine. The attendant was friendly.
-Next we took a couple of quick showers with the sulfur water.
-Next we did a dry, then wet, and finally a menthol breathing sauna. All of the saunas were too mild for my tastes and it almost seemed like what was the point. Apparently since the Spa is under medical supervision they put the temperature in the saunas conservatively low to prevent fainting, but for me it seemed like I hardly sweat in them. Normal saunas are hotter, which I prefer.
-Next we laid down on some ceramic lounge recliners to rest with a nice view of the vaulted stone and brick ceiling, but not much to do. People were coming and going talking, so it is not as quiet and restful as it often should be.
-We finished up being able to swim in a large sulfur water pool until closing time. I enjoyed this part, and the room is a magnificent restored Roman vaulted ceiling. The Spa has several areas with impressive old vaulted stone architecture going back to the Roman period.

In sum, I preferred the pools and showers, but the 3 saunas were too mild in temperature for me. I also would have preferred an open circuit, instead of the programmed and time controlled visits. The big pool at the end was an exception with free swimming, and the highlight of the visit with the magnificent architecture.

The place smells of sulfur which is like rotten eggs. However, that is why people go and shows that the waters are full of sulfur which is very good for the body, and the reason to visit. Many Spas just use chlorinated tap water, which is not healthy. Baños de Montemayor uses sulfur laden spring water, from the surrounding hills, which is much better.

There is free parking for clients of the facility, which is helpful since parking in Montemayor is a bit tight.

The town of Montemayor is reasonablly attractive, as is the nearby town of Hermas, with its old "Jewish" quarter. The entire area is a pretty valley sourrounded by hills and mountains and is unusually green for Spain.

Room tip: We did not stay at the hotel. We only did the Spa circuit.
Ask Kaunas8 about Gran Hotel Balneario
7  Thank Kaunas8