USD 65
View deal
Travelocity
Orbitz.com
Priceline
View all 18 deals
Prices are provided by our partners, and reflect total costs of the stay, including all taxes and fees known to our partners. Please see our partners for more details.
Payments made by partners impact the order of prices displayed. Room types may vary.
noppatoy
Bangkok, Thailand
34

Pros:
1. The resort is beautiful and spacious, with access to private beach.
2. Good location. The resort locates near Nathon pier. So we could arrive at the ferry very fast.
3. Clean and well-maintained room.
4. Staff are friendly and helpful. They respond to our requests promptly and process things very fast.

Trip type: Travelled with friends
See all 1,738 reviews
Payments made by partners impact the order of prices displayed. Room types may vary.
Nearby Hotels 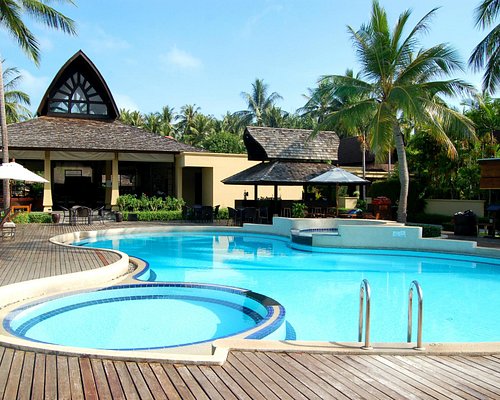 Even the resort isn't operating in a full function (due to the covid19) but everything here is super fantastic! Beautiful room with private pool, nice clearly sea view, delicious breakfast in every morning and lovely-helpful staffs especially K'Tik. If you are looking for the nice place to stay while travelling in Samui island, Trust me this resort is the best one for spend the good time and you won't be regret choosing this place! Thank you so much for 4 days and 3 nights with full of joy, unforgettable memories at Mai Samui.

Thank you very much for your precious time sharing a review to us.
We're glad to hear from you that you got a good memorable and nice experienced during stay at Mai Samui.

Hope to welcome you again next time.
Have a nice day and stay safe with good health.

Report response as inappropriateThank you. We appreciate your input.
This response is the subjective opinion of the management representative and not of TripAdvisor LLC
Ketsuda S
1
Reviewed 14 August 2020 via mobile
Very beautiful and relaxing hotel

We stayed 2 nights at the pool villa room type, everything was perfect, room, pool, cleanness, excellent staff. We really had a good time there. We would absolutely come back again next time. Strongly recommend for ones who look for the beautiful and peaceful resort.

Thank you very much for your precious time to share the experienced during stay on our beautiful resort:)
Your compliment is encouraged to our all concerns especially the staff.
We will keep our standard for service and absolutely that our customers will get the same thing once they are with us.

Have a good day.

We are looking forward to welcome you next time.

Report response as inappropriateThank you. We appreciate your input.
This response is the subjective opinion of the management representative and not of TripAdvisor LLC
Morgan-grace
68
Reviewed 6 August 2020
Pictures are all for show- left early

We had just been married in phuket and were very excited to be heading to this stunning picture perfect resort... we were forgotten at the airport, after waiting for about 15 minutes we called the hotel to be advised someone is almost there. We waited for 2.5 hours for someone to arrive..to make it better the staff were rude to us on arrival for not letting them know we were late?! (Please explain how this was our fault?!)

Anyway shown to our private pool room- as soon as the guy walked out i hysterically cried.. it was dirty, the doors didn't lock, the pool was green with alge (not swimming safe by any means) the fridge was leaking, the bed sheets weren’t even clean with brown stains right through them. we notified staff Immediately and was told nothing would be done until the following day because we arrived late.

Next day i woke hoping that things would be better- hell no it was worse then i realised. Breakfast was disgusting- none of the utensils were clean, tables were covered in plates, staff standing around having a chat. Management came and spoke to us and assured everything would be rectified once we were back. We got back to our room about 6pm- Nothing had changed- back to management on the way to tea- i was advised it had already been fixed.. it was only when i started raising my voice he eventually come and seen for himself nothing had been done. No sorry, no nothing- grunted at me and walked out. At 10pm we just got back and was in bed with thumping on our door- they thought this was an appropriate time to come and rectify the issue.

Their attitude was disgusting, the grounds were filthy, staff were rude and this is certainly not even a 3* hotel.

We left after 2 nights and went and stayed in town. What an absolute waste of money. Would not wish it upon my worst enemy.

First of all, please accept our apologies if you got some inconvenient during stay at the resort.

We try to find out your case in the past but we cannot find it. Normally, any issues happened to our guests we will have the incident report to the management. But on your case we do really cannot find. So we would ask you to give us a direct message even by email or hotel's facebook inbox to give us more details for your reservation. Then, we can find out for what's happened at that time.

There should be something mistaken at that time. We're therefore awaiting your kind response please.

Report response as inappropriateThank you. We appreciate your input.
This response is the subjective opinion of the management representative and not of TripAdvisor LLC
LynandDarryl
Alexandra Headland, Australia
12750
Reviewed 28 April 2020 via mobile
Holiday with best friends

We recently travelled to Thailand as two couples and stayed for 8 nights at Mai Samui Resort. We had pool access rooms that were adjoining...thanks Mai Samui for granting our request. We have no negatives to say about the resort at all. The pool was nice and clean and perfect for swimming at any time of the day. The meals were great, as well as the drinks, especially from the beach bar. Massages from the spa were also great as well. The staff were very friendly, and despite the difference in language, they went out of their way to make our holiday most enjoyable. We would most certainly stay again at Mai Samui Resort.

Thank you for your great review and for taking the time to give feedback.
We're much appreciated that you had the good experienced on your holiday with us.

We're looking forward to welcome you next time.

Report response as inappropriateThank you. We appreciate your input.
This response is the subjective opinion of the management representative and not of TripAdvisor LLC
BelindaK158
Orbost, Australia
1
Reviewed 8 March 2020
BelindaK

Absloutley fantastic staff even catered for our daughters 14th Birthday with cake and singing. Swimming pools are a hit with the kids. Gorgeous setting a true tropical paradise highly recommended for a family getaway.

First of all, thank you very much for staying with us recently and thanks to spending your time to give us the review.

It is great to read that you had a memorable holiday. We pleased that you found our hotel to be relaxing and the service to be attentive. and would be delighted to welcome you back for another enjoyable stay at our hotel in the future.

Report response as inappropriateThank you. We appreciate your input.
This response is the subjective opinion of the management representative and not of TripAdvisor LLC
View more reviews
PreviousNext
12…