USD 107
View deal
Hotels.comUSD 107
Booking.comUSD 107
PricelineUSD 107
eDreamsUSD 107
TripadvisorUSD 107
FindHotel
View all 14 deals
Prices are provided by our partners, and reflect total costs of the stay, including all taxes and fees known to our partners. Please see our partners for more details.
Payments made by partners impact the order of prices displayed. Room types may vary.
Peter S
Bundaberg, Australia
6545

Stayed one night at this hotel and found the hotel a good choice. The room was clean,comfortable and of a good size. Good bathroom with heated floor also. meals were good with a large selection of options for breakfast. The hotel is located not far from the local supermarket.More

Thank you so much for your review! We truly appreciate all the feedback we receive.

Report response as inappropriateThank you. We appreciate your input.
This response is the subjective opinion of the management representative and not of TripAdvisor LLC
See all 560 reviews
Payments made by partners impact the order of prices displayed. Room types may vary.
Nearby Hotels 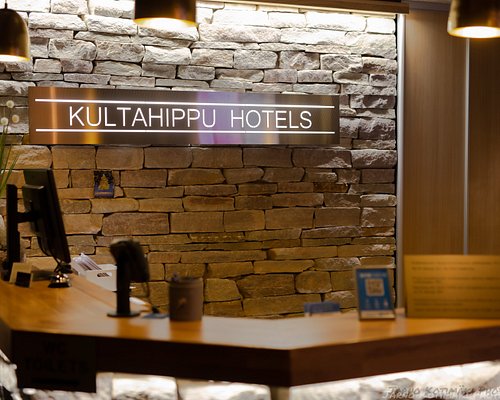 Had a very nice dinner here. Salmon soup was delicious! Healthy pieces on salmon in a light but flavorable broth. We had both choices of menu fish (char and local white) which were well cooked, tender and flaky. Price range 19-22 € for meals, which were good portions. Service overall good.

Thank you so much for your review, we truly appreciate all the feedback we receive.

Report response as inappropriateThank you. We appreciate your input.
This response is the subjective opinion of the management representative and not of TripAdvisor LLC
TMat101
London, United Kingdom
97
Reviewed 31 January 2019
Comfortable and cosy

The hotel is a basic motel/lodge style but was clean and very cosy with underfloor heating making the shower room super warm! Tea and coffee making facilities are provided in the room. The fridge was useful to store a few things from the local K supermarket where we stocked up on fruit and salad for our supper after our activities during the day. We also had a coffee and cake at the Bistro in this supermarket which is only a few minutes walk away from the hotel with another supermarket further on (both within easy walking distance - we are seniors!) which also has a café.
We had the buffet breakfast everyday which included as much tea, coffee, juice as you wanted along with a selection of cold cuts, cheese, bread, toast, rolls, fruit, yoghurt, cereal as well as hot buffet of bacon, egg and sausage. Plenty to keep us going. All the dining areas were spotlessly clean, including cutlery, the buffet was replenished discreetly, and often, by staff and tables cleared away. When we were there the hotel was quite full with a French tour group so we joined them for a couple of excursions organised by the on-site Club Nord. This company, and staff, was also excellent with special mention of Sirkku (with whom I was communicating by email almost daily prior to departure!) and Clement the guide for the Reindeer Farm and Sami Museum visit (a great day excursion we thoroughly recommend). Thank you to Sirkku for suggesting the itinerary for us and sorting out some dietary issues, and special thanks to Clement for his super knowledgeable information on the day trip, especially at the museum, and all his English interpreting for us.

Thank you so much for your review! We truly appreciate all the feedback we receive.
I will pass your regards to Sirkku and Clement!

Report response as inappropriateThank you. We appreciate your input.
This response is the subjective opinion of the management representative and not of TripAdvisor LLC
rashport
Dubai, United Arab Emirates
190115
Reviewed 16 January 2019 via mobile
Big hotel in small village

Probably, this is one of the most famous hotels in Ivalo. The room is good and clean. Bathrooms are clean but some may find them old and outdated. The hotel has a nice sauna and a pool. Breakfast is excellent with a variety of choices. Housekeeping isn’t available on Sundays. Reception staff are very helpful. They help guests book their transportation or call parks/attractions to check on opening hours and availability. There’s a play area for kids. Most of the guests are French because they come on tourist packages. Kicksleds are available outside for hotel guests to use for free. WiFi connection is excellent all over the building.

Thank you so much for your review! We truly appreciate all the feedback we receive. We really hope to see you in Hotel Ivalo again!

Report response as inappropriateThank you. We appreciate your input.
This response is the subjective opinion of the management representative and not of TripAdvisor LLC
lopezpol
Barcelona, Spain
411
Reviewed 16 January 2019
Terrible 2.0

5 days ago, a customer wrote an opinion (titled TERRIBLE) about her stay for New Year's Eve at Hotel Ivalo and she received a response from the hotel that is not accurate and faithful to reality. That’s why I feel the need to tell the truth with some graphic help.
Regarding the cleaning of the rooms, please see attached pictures 1,2 and 3. The picture number 3 is particularly relevant because this is the way they “clean” the rooms, with just stretched out the beds and without giving us new towels.
About the food, I think there’s no need to spend mine and also your time writing about it, a picture is worth a thousand words (pictures number 4 to 7). Just a brief comment, we had to set the table by ourselves because nobody from the hotel staff did it (picture 8), except for the New Year’s Eve dinner.
Just a clarification about the misunderstanding of the bottle of vodka. As you let us to stay in a private room, physically separated from the main dining room, we though that bringing our bottle of vodka was permitted (your bar was closed). When the hotel staff seized the bottle (I’m not sure that the Finnish law allows a hotel worker to require a private good from a customer) we immediately apologize to her.
We didn’t attach great importance to that event until the next day when we saw a bottle of vodka identical to ours (same amount of liquid and same brand) on the front of the bar, ready to be served with all the other bottles. For greater coincidence, that bottle did not have the stamp of the customs authorities, something impossible if it was being sold in a bar, unless it was ours, which was bought in the Duty Free on the Valencia Airport. Not enough with that, when we asked for our bottle the waiters of the bar began to speak in Finnish between them and walked away from us, without giving us a clear answer.
But as you said, is always a question of personal opinion and this is undisputable. So, here is my personal opinion, don’t sell what you can’t really offer.

Hello! I´m one of the owners of Hotel Ivalo. We are very sorry you feel this way.

I´ve listened to everyone in our staff.
We have told the kitchen staff about your complaint.

About the alcohol.
On our Hotel Director´s order, our staff did take the alcohol from your group. As I said in the other response, according to Finnish law, guests cannot drink their own alcohol in the restaurant area.
If we have an inspection, we would lose our license to serve any kind of alcohol for a long time.
We told Catai guide, that You can have your alcohol back on the day of departure.
You didn´t pick it up. (We also didn't serve it to others, but I think that is obvious.) The bottle was still there waiting when the group had left and the staff told us you didn't pick it up.

I hope this was a misunderstanding on both sides and in the future we are able to communicate the rules better.

Report response as inappropriateThank you. We appreciate your input.
This response is the subjective opinion of the management representative and not of TripAdvisor LLC
lolly19692017
Millbury, Massachusetts
3329
Reviewed 14 January 2019
Mediocre hotel that serves cold & horrible breakfast!

The location of the hotel from the airport was great. The hotel itself was just "ok". I would rate it as a 3 star instead of a 4 star. The hotel hallways looked like a cheap hostel. Not attractive at all. While the hotel had a pool, it was only open from 3-8pm which is ridiculous. The hotel did offer free daily breakfast but every day it was the same. The scrambled eggs were consistently ice cold and the bacon consistently uncooked (I happen to like coked bacon as to avoid getting a tape worm). The tours were good and the woman handling the booking of the tours was very courteous and pleasant. We did a husky ride tour and a snowmobile tour that were reasonably if not a bit over priced. We did not sleep well at all in the beds. We found them to be uncomfortably hot. The beds have down duvets, down pillows (that your head sinks to the bottom of the bed) and hot sheets. We were still hot with the temperature in the room off. Needless to say the pillows were not supportive and helpful with my cervical strain. The televisions were tiny as well as the rooms. There is no staff working behind the front desk after 8pm so if you need anything you are screwed. The front desk staff are completely disorganized and incompetent . I was overcharged 138.36 for my room and am currently contesting it with my credit card company.

This review is the subjective opinion of a Tripadvisor member and not of TripAdvisor LLC.
View more reviews
PreviousNext
1…345…
<script type='text/javascript' crossorigin='anonymous' async onerror='__scriptLoadError(this,true);' src='https://static.tacdn.com/assets/iZ1Bsx.6352cdb5.es5.js' data-rup='iZ