Travelocity
Orbitz.com
eDreams
View all 13 deals
Prices are provided by our partners for one room, with variable occupancy rules as provided by the property, and reflect total costs of the stay, including all taxes and fees known to our partners. Please see our partners for more details.
Payments made by partners impact the order of prices displayed. Room types may vary.
Ceri393
Cardiff, United Kingdom
3524

A slightly odd mix of conference hotel and bunkhouse

The room contains a decent kitchinette, which you may need to use as there is no breakfast - you either have to self-cater or eat out. We opted to eat out - there are a number of places the climbers tend to congregate about 10 mins walk from the hotel. The pool is a good size and has a paddling end for small children.

Given the numbers of climbers and walkers on the island it does not come as a surprise that most accommodation options appear to be 'no frills', but this seems an odd combination in a large modern hotel like Elena Village. However it is very good value for money, at 65 euros for a triple.

Again, like the previous reviewers, we were surprised by the customer service, especially as most Greeks (including the other islanders) pride themselves on their hospitality. Most of the staff on reception were cool, bordering on rude, however the cleaning ladies were both lovely and efficient. Overall we had a good stay and would return.More

Show less
Room tip: Beware if you have mobility problems - you could potentially be on the 7th floor and there's no lift (yet).
See all 94 reviews
Payments made by partners impact the order of prices displayed. Room types may vary.
Nearby Hotels 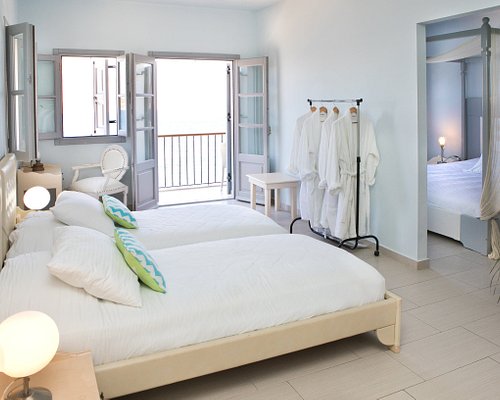 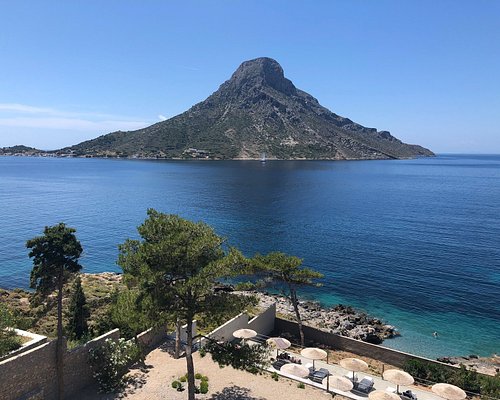 Returned home last week from our first trip to Kalymnos & the Elena Village Hotel. Had a fantastic week, Kalymnos is absolutely stunning,we were really blown away by it, it now ranks as one of our favourite Greek islands.

Overall we were very impressed with our choice of hotel too, just a couple of niggly things that stopped me from giving it full marks. The building itself is stunning, very clean & modern rooms & public areas, and of course the fantastic view across to Telendos.

The room itself is very spacious, as is the huge balcony! Kitchenette is well fitted out with fridge, microwave, 2 ring burner & coffee machine. The most we did in it was prepare a light breakfast though, I was on holiday after all!

The distance out of Massouri was easily walkable, a 10 - 15 min stroll along the beautiful coastline.

The only negatives in our opinion were:

Nowhere in the shower to place your shower gel, shampoo, etc. Would be so easy to provide a corner shelf or similar,

Plenty or wardrobe/storage space but none accommodated a dress, unless you had the bottom part folded under! Again, all that is needed is to remove a shelf from one of the wardrobes,

A huge balcony that was, in my opinion, crying out for a clothes airer. Wet towels, swimgear, etc had to be draped over the balcony railings & kept an eye on it case the wind caught it & sent it down to the balcony below!

Now, as I said, in the whole scheme of things, these are very minor points but would be so easy to rectify.

Our only other negative, and I guess it's an important one really, is that we felt the customer service was very lacking. Whether or not the staff are tired now it's nearing the end of the season, I don't know. A couple of the reception staff always said hello & were chatty but some didn't! I had to go to reception one evening to get our towels changed as the maid appeared to have forgotten us. The receptionist did change them but there was no apology & it felt like she was doing it begrudgingly.

On our last day we stayed by the pool, when we ventured across to the snack bar for lunch the waiter completely ignored us & carried on messing with his phone (we were the only customers in at the time). Eventually my husband had to ask if they were open & could we get served please!

To sum up we both said we felt that the hotel had no one working in it who cared about the hotel with any passion. Apparently the owner lives in the States but one would assume the manager would instil the importance of customer service into his staff? . Neither of us want to be fawned over on holiday, but it's nice to be made to feel welcome & not an inconvenience.

Would probably stay there again though as it does have more positives than negatives.

This review is the subjective opinion of a TripAdvisor member and not of TripAdvisor LLC
rickard1971
Ashford, United Kingdom
5
Reviewed 22 September 2013
Beautiful place to stay

Just returned home from another trip to Kalymnos. The Elena Village is exceptionally clean and well presented, the pool area is stunning with its own running waterfall and beautiful views of Telendos. The sun beds and seating around the pool area are also very good quality.

The rooms are of a very high standard and of modern design.

The staff are friendly and helpful and the rooms were good value for money.

The food at the bar is good but there is a limited choice, there is now a small shop connected to the hotel. It is about a 10 minute walk into Massouri and a large range of restaurants and bars.

Only negative is the shower in the room is so powerful it blows the shower curtain out and soaks the bathroom floor! Just don't turn it up too high.

This review is the subjective opinion of a TripAdvisor member and not of TripAdvisor LLC
AllyLovesSun
Harrogate, United Kingdom
1951
Reviewed 27 June 2013
The best in kalymnos, by far

We have just returned from a 7 night stay at the elena village apart-hotel in kalymnos.

It did not disappoint and I would definitely recommend this hotel to anyone. I cannot believe it is not number 1 on trip advisor! It has by far the highest standards of anything we saw on the island. Remember this is greece, so it's rustic and traditional, not Vegas, but this hotel is more on the luxury side than anything else there.

The hotel is situated just outside of Massouri, but it's only about 5 minute walk to the nearest taverna for dinner / lunch. A local place called antonios served gyros pita and a beer for €4 so we went there for lunch most days, the hotel itself has a pool side bar which is very reasonably priced and the food was perfect for light bites, snacks, lunches by the pool. The main part of Massouri where all of the restaurant and bars are is about 10-20 min walk depending on speed! I'm normally a heel wearer but didn't bother as it was a bit far in heels.

Location wise, yes, it probably is the further hotel from the centre, but this really isn't a big deal, and a nice stroll alongside with sea front is welcomed after a day in the sun. The other benefit of the hotels location is the fact it is up the coast, means you have perfect view of the sunset every evening, not all restaurants / bars etc get this as the island of telendos can hide the view (but still amazing obviously!)

Rooms were lovely, spacious, clean, good sized king bed, all new, modern and air con worked perfectly! It was at least 35 degrees during our stay so air con is essential.

Rooms also have a little kitchenette, hence it being an apartment - hotel, this was great as means you have use of a fridge, have breakfast in room etc.

Pool was lovely with parasols and contemporary sun beds.

In summary, elena village is a brand new, peaceful location, away from hustle & bustle, amazing pool, and views!

This review is the subjective opinion of a TripAdvisor member and not of TripAdvisor LLC
PRM2011
Lake Tahoe, NV
1716
Reviewed 20 May 2013
Great hotel for a family climbing trip

The hotel staff were friendly, prepared good food, and were great to our kids. The hotel was clean, the room comfortable and the pool area exceptional for Kalymnos. The hotel is also very well situated for the Grand Grotta and Odyssey sectors. A great stay.