USD 131
View deal
Free cancellation until 02/02/22
Hotels.comUSD 162
Booking.comUSD 162
TravelocityUSD 162
View all 15 deals
Prices are provided by our partners, and reflect total costs of the stay, including all taxes and fees known to our partners. Please see our partners for more details.
Payments made by partners impact the order of prices displayed. Room types may vary.
ErnoP
Vantaa, Finland
4138

Stayed four nights and the all-inclusive resort was very good value for the money. Location is calm and nice sea facing views to watch sunsets with zipping Madeira wine. Buffet lunch and dinner was changing on daily basis do got to experience lots of delicates of Português cuisine.

Staff was extremely helpful from the beginning and organized what was requested. They really make hotel residents feel welcomed and are providing impeccable service all the time. Pool area is nice with jacuzzi as well like are the saunas, Finnish and Turkish versions of those available for use. Bus transport twice a day to Funchal center is also very handy. Bar had live entertainment almost every evening until 11pm. Special recognition of the staff to Mohammed at the bar and Leticia at the restaurant side. More

Thank you very much for the very nice compliments you have addressed us here.
We were also very happy to have had the opportunity of offering you good times in our Hotel.
We hope you can give us the opportunity of this wonderful experience again next year.

Best wishes from the Pestana Team

Report response as inappropriateThank you. We appreciate your input.
This response is the subjective opinion of the management representative and not of TripAdvisor LLC
See all 2,960 reviews
Payments made by partners impact the order of prices displayed. Room types may vary.
Nearby Hotels 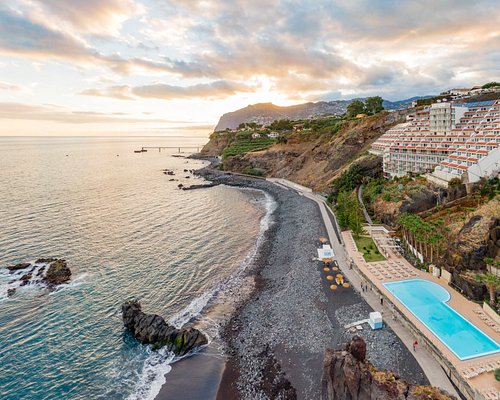 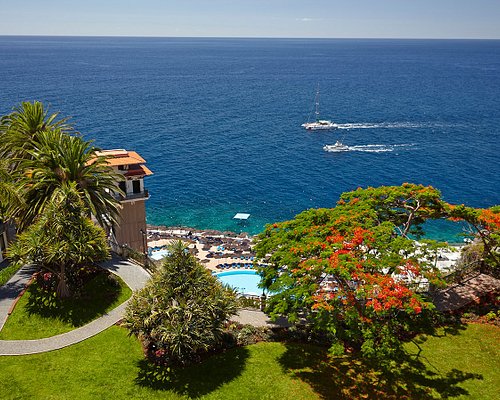 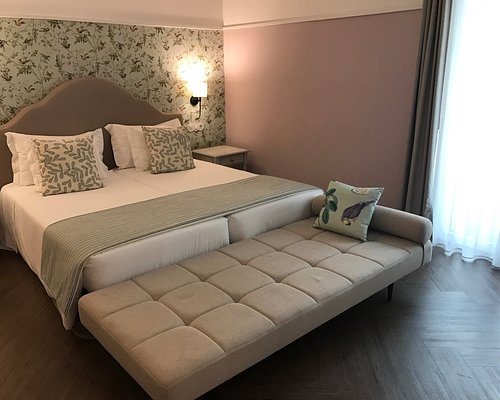 Whilst this is rated as 4*, I have nothing but praise for the friendliness & quality of service given by staff. Nothing was too much trouble. The food was always plentiful, with a wide variety of choice (amazing salad bar!!) including child-friendly & some GF options. We were very happy there, using it as a base to explore this beautiful island, with its tear-round temperate climate. Thank you!!

First of all, we want to thank you very much for your excellent feedback on Pestana Ocean Bay.
It gives us great satisfaction to hear that you enjoyed your stay at our hotel and that you particularly enjoyed our services and facilities.
We were also very happy to hear that we were able to offer you a pleasant stay.
We look forward to hosting you again soon at Pestana Ocean Bay.

Report response as inappropriateThank you. We appreciate your input.
This response is the subjective opinion of the management representative and not of TripAdvisor LLC
john l
Ripley, United Kingdom
723
Reviewed 9 November 2021
Lovely Little Hotel

We were not too sure what to expect of Madeira let alone the Ocean Bay. Impressed on both counts. Our transfer coach dropped other guests off at some beautiful hotels. We were last. The approach to the Ocean Bay is not particularly impressive. The hotel itself didn’t look particularly impressive either in the shade of the cliffs. I thought, oh dear have I made the right choice? The sun and the sea view of course were on the other( south) side. We have recently stayed in some very big hotels and this one feels tiny in comparison. Once again , oh dear. The hotel is not new and in some areas probably in need of an upgrade. Immaculately clean though. The room we had was on the sixth floor. A little dated but in good nick. Once again immaculately clean. Then we slid the balcony door back. What an absolutely stunning view. The beach is pebbles/rocks, so nothing to write home about. The pool area is lovely. Water a bit cool though. Immaculately clean. A second pool in the garden area is good if you want to do lengths. Dining area is very nice too. Inside and out. Lovely views over the sea. Food is buffet style. Good quality and plenty of choice for us. Bar and lounge areas are good. Drinks are what we expect In an all inclusive at the price we paid.
We loved this hotel. There was something cozy about it. The staff are brilliant by the way. We intend to return next November and have an explore around this beautiful island.

We are pleased to hear that you have enjoyed your stay with us.
Your positive comments about us have been really appreciated and we sincerely hope that your travelling plans bring you back to Madeira again, so we can have the pleasure of hosting you again to offer “Memorable Moments”.

Report response as inappropriateThank you. We appreciate your input.
This response is the subjective opinion of the management representative and not of TripAdvisor LLC
Alex T
2
Reviewed 7 November 2021 via mobile
Highly recommended.

Fantastic experience. The food was decent, but it was all buffet meals so set expectations accordingly. The staff were amazing. Friendly, welcoming, and helpful. Rooms are clean and in food repair but decor a bit dated. The hotel is right on the beach. Definitely hoping to go again.

Room tip: Take swimming shoes if you're going to swim in the ocean. The pebble beach isn't kind to the feet.
Trip type: Travelled as a couple
Ask Alex T about Pestana Ocean Bay All Inclusive
Thank Alex T

Thank you for taking the time to post such a fantastic review regarding your recent stay at Pestana Ocean Bay and share it with other travelers.
We were delighted to learn you had a fantastic experience
Thank you for your very kind comments regarding our staff.
We hope to have the opportunity to welcome you back to our Hotel.

Report response as inappropriateThank you. We appreciate your input.
This response is the subjective opinion of the management representative and not of TripAdvisor LLC
jonst316
11
Reviewed 7 November 2021 via mobile
Great hotel beside the ocean

We stayed at the Ocean Bay as part of a BA all-inclusive package. The hotel exceeded expectations on all fronts. Our sea-facing room was a good size, with a spacious balcony, table and desk. A great choice of hot and cold food, including mid afternoon snacks, plus drinks included. Faultless service. Two pools of a reasonable size as well as a small sports room. We took the BA shuttle from the airport, though actually the public airport bus terminates at the hotel for €5 each way. There are regular public buses to Funchal at the top of a very steep path. Camara de Lobos (fishing village where Churchill came to paint) is about 3 km along a sea path. Thanks for a great stay, we hope to be back.

Thank you very much for your kind words which serve as the best incentive for all and each one of us. Again we feel the feeling of mission accomplished and are very proud to know that you wish to come back in the future.

We look forward to see you again.

Report response as inappropriateThank you. We appreciate your input.
This response is the subjective opinion of the management representative and not of TripAdvisor LLC
36DavidB
Leeds, United Kingdom
153119
Reviewed 6 November 2021
Not for us

Our experience at this hotel really wasn't great. We go on holiday to have a relaxing time, to enjoy the locality of the place and to feel refreshed at the end of it. Unfortunately this hotel did not live up to our expectations or some of the glowing reviews on TA.

On the positive side the staff were all really good, generally friendly and helpful. In some cases they couldn't do enough for us and really tried hard. The rooms were clean and although a little tired and basic, were fine.

Although the hotel is on the beach, with good views it could be considered to be a little isolated for some due to the steep hill. The hotel however provide a bus into Funchal which is helpful. There is a steep walk up to the main road where there is a very efficient island bus service.

The downside of the place was some of the rather rude customers who had no respect for others, continually pushed in and had absolutely no concept of being polite, queuing and waiting their turn. This is not a fault of the hotel and really not a lot they could do about this.

The major issue with the hotel was the food quality and lack of choice. Breakfast seemed to be the best meal, however after that it was downhill. Lunch was fair, afternoon snacks dire with bland ham or cheese curled up sandwiches and some uninviting pieces of cake, and dinner which was very disappointing.

This might sound like I'm being pompous and having a moan, but I am generally quite tolerant and this hotel with its arrogant customers and low quality food added up to the point of being unacceptable. The food can be addressed by the hotel, but the attitude of other customers could be difficult to resolve. I was expecting a 4 star hotel experience and received substantially lower than this. A great pity as the staff were great.

First of all, we would like to thank you for choosing our hotel for your holidays in Madeira.
We regret that we were not able to meet all your expectations and present our most sincere apologies for it, as our main objective is to provide our Guests with a memorable stay, we therefore appreciated your observations and feedback and they will be taken in consideration.
Nevertheless, it`s great to know you have found our staff friendly and helpful and that you were satisfied with the offer of our breakfast.
On behalf of all our team we appreciate your huge report of your stay and we hope that you may chose Madeira for your holidays.

Report response as inappropriateThank you. We appreciate your input.
This response is the subjective opinion of the management representative and not of TripAdvisor LLC
View more reviews
PreviousNext
1…345…