USD 384
View deal
Free cancellation until 27/06/21
Hotels.comUSD 429
Expedia.comUSD 429
TravelocityUSD 429
View all 19 deals
Prices are provided by our partners, and reflect total costs of the stay, including all taxes and fees known to our partners. Please see our partners for more details.
Payments made by partners impact the order of prices displayed. Room types may vary.
Lechiffre1
Monaco
7451186

I was back in the LeGrand in October. It was a little complicated at check in and I was greatly assisted by Ernesto in guest relations who took very good care and fixed the mistake. Service at the intercon club was outstanding Gilles is a phenomenal host and is always so easy to approach and very helpful. To be fair all the staff in the club did a great job! My room had a view of the Opera and it was a real nice room. The hotel is a bellweather of Paris and does need a little work in some areas, I enjoyed a few drinks downstairs and found the staff efficent and friendly. I am due back next month and I am looking forward to the visit.More

Show less
Room tip: It is well worth paying extra for club access!

Thank you for taking the time to share your experience with us here on Tripadvisor following your recent stay at the InterContinental Paris Le Grand.

We are delighted to hear that you enjoyed your stay with us and that our staff did contribute to your comfort and well-being, especially Ernesto and Gilles. It will be a real pleasure to share your kind words with them.

We look forward to welcoming you back to Paris shortly.

Report response as inappropriateThank you. We appreciate your input.
This response is the subjective opinion of the management representative and not of TripAdvisor LLC
See all 3,429 reviews
Payments made by partners impact the order of prices displayed. Room types may vary.
Nearby Hotels 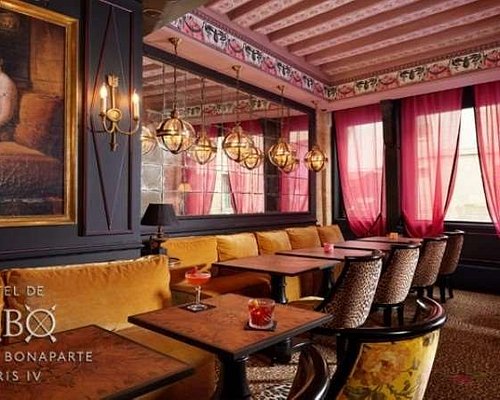 I booked a room through rewards night, staying 150 + nights a year gives lots of points to spend.

This was the worst hotel for service and rooms I have ever stayed in.

The staff were rude, did not even look me in the eye once during check in.

Did not acknowledge the fact I was an Intercontinenal Ambasseduer or that we were a couple, giving us a twin room, whilst in a romantic break to Paris, even though I had booked a double.

When we complained, they said they would sort it out, we went out into Paris for the night.
On arriving back, the only change made was the beds had been pushed together and a double sheet laid on top.

In the morning, I pointed out graffiti in the room, peeling paint, a view in to a hearing fav and the beds and they didn't seem that concerned.

It recompense for all the problems they did not charge for valet parking.

Thank you for sharing your experience here at the InterContinental Paris Le Grand on Tripadvisor.

We would like to express our most sincere apologies for the disappointment that you did experience during your stay regarding the service received.

Your comments have been shared with the Front Desk Management team in order to implement corrective measures to improve this element of our service.

With regards to the bed, our twin beds can be converted into a King bed with a mattress topper, not a sheet. Again, we apologise for the discomfort or inconvenience that this may have caused you both.

We do hope that you will change your mind and give us another chance to show you a real InterContinental experience and look forward to welcoming you back in the future.

Should you wish to discuss this matter further, please do not hesitate to contact me directly.

Report response as inappropriateThank you. We appreciate your input.
This response is the subjective opinion of the management representative and not of TripAdvisor LLC
JF206
miami
15089
Reviewed 24 November 2014
Let me tell you a secret

Had a great experience in this hotel that is just next to the opera of Paris. The great value in this hotel is if you book with access to the 5 floor concierge level. This is a steal....you have a wonderful breakfast. You have a tea hour.You have free drinks,yes alcohol included at certain times of the day. So if you are traveling with a group its the perfect place to meet at certain times of the day. The staff in this floor is very very friendly and eager to help you in anything you need. It ranks with the best service I have received even in the Far East.

We had a junior suite that was spacious. The only complain was the shower area was a bit small. The price is consonant with a 5 star hotel in Paris.
The hotel has recently been renovated. It is a large hotel so I presume if you have no access to the concierge floor,service may not be so personal.

This review is the subjective opinion of a TripAdvisor member and not of TripAdvisor LLC
le_nomade
Washington DC, District of Columbia
82105
Reviewed 24 November 2014
Excellent location and comfort

Stayed here for 2 nights while visiting family in November. Location is central and cafe is fantastic, albeit expensive. Check in and out was fast (although it was manual) there was no obvious electronic checkout. Beds were comfortable and rooms quiet. View from our room was of an inner courtyard, nothing special. The decor is Napoleonic, and by its nature, over-the-top. Bathrooms were clean and functional, although the toilet flushed poorly.
While I enjoyed the stay and would go back, I wouldn't be excited about staying there.

Thank you for your five-star review following your recent stay here at the InterContinental Paris Le Grand.

We do offer the option of an express check-out for guests not wishing to 'manually' check out at the reception. This involves dropping off your key at the reception when leaving and we will debit the credit card for the payment, with your permission of course. I regret if this was not explained to you at your check-in and did impact on your stay.

We hope that the issue with the toilet was pointed out to us during your stay in order for us to resolve this at the time. Please accept our apologies for any inconvenience that this may have caused you.

We do hope that you will visit us again one day in the future and we will be able to show you the real InterContinental experience!

Report response as inappropriateThank you. We appreciate your input.
This response is the subjective opinion of the management representative and not of TripAdvisor LLC
Chris_Battersea
London, United Kingdom
232251
Reviewed 23 November 2014
Great stay but a little frayed at the edges

A perfect location. And a very well run hotel - but the Napoleonic design and soft furnishings are a little worn. Our room was quiet (4th fl scribe side) and was cozy, but the toilet wall needed plaster and the curtains were ripped. The shower pressure was weak and the carpet a bit worn. However service was excellent and linens clean, housekeeping superb. If you want a reliable corporate brand hotel in paris, this is the place for you.

Thank you for sharing your comments with us following your recent stay here at the InterContinental Paris Le Grand.

We are pleased to hear that you enjoyed your stay with us and were comfortable in your room. Please accept our apologies for the various technical incidents that you describe. We hope that these elements did not cause too much inconvenience and hope that we were informed during your stay in order to resolve the issues.

We hope to have the opportunity to welcome you back to Paris in the future.

Report response as inappropriateThank you. We appreciate your input.
This response is the subjective opinion of the management representative and not of TripAdvisor LLC
thomaiii
Chicago, Illinois
17
Reviewed 22 November 2014
Shocking Customer Service

We had booked 4 suites for our group. After arriving at the hotel after a long flight, we were told our rooms were not ready, but should be ready in 30 minutes. After 30 minutes, we checked back and were told it would be an additional 2 hours. We were repeatedly told by the front desk staff to 'just enjoy Paris'....a sentiment I can appreciate, but after a long overnight flight, most of us just wanted to get to our rooms and freshen up. After waiting the additional 2 hours, we again checked in with the front desk....who then told us it would be another 4-5 hours, and that there was a possibility we may not receive all of the rooms we booked because they had some more important guests. We asked why we were told it would be 30 minutes when we checked in, and now were being told differently....and the woman at the front desk said: "I cant imagine why anyone would have ever told you 30 minutes"....and I'm thinking: it was YOU who told me 30 minutes!

So after waiting in the hotel lobby for 4 hours, we finally threatened to just cancel our reservations and go to a different hotel. At this point, our rooms magically appeared.

During this lengthy delay, we had asked and asked where our luggage was, and nobody could tell us. We could not access any of our clothing or personal items...we were basically forced to sit and wait for hours. I even walked to the front of the building and asked the staff who dealt with baggage if they knew where our bags were....and basically got a shrug. I then started moving the pile of bags in front of the building to find my luggage, and eventually found it piled under dozens of pieces of luggage. The staff just sat there and watch.....didn't help one bit as I struggled to get my own bag.

Considering the amount of money paid for the suites we had booked, and the fact we had booked 4 suites for 4 nights.....at a hotel of this "caliber".....guests should be treated like Kings. Unfortunately, we were treated like garbage.

First of all, thank you for taking the time to share your experience with us here on Tripadvisor following your recent stay at the InterContinental Paris Le Grand.

Please accept our most sincere apologies for the treatment that you describe in your review. I am very shocked and concerned by your comments and have shared them with all management concerned in order to take action.

Please be assured that this is not the level of service that we strive to provide to our guests. I can only apologise that you did have to experience this during your stay here in Paris.

We do hope to have the opportunity to welcome you back to Paris in the future and the occasion to show you a true InterContinental experience.

I would like to invite you to contact me directly should you wish to discuss this matter further.

I remain at your disposal.

Report response as inappropriateThank you. We appreciate your input.
This response is the subjective opinion of the management representative and not of TripAdvisor LLC
View more reviews
PreviousNext
1…199200201…