Could be better - Review of Weathervane Hotel

Stayed two nights, the staff were very friendly and helpful cannot fault the service they give. Rooms are a good size and clean but could do with a bit of TLC , but, very noisy both nights we stayed due to someone in the room above ours who decided it would be great fun to start running taps and walking about all night , worst two nights I’ve ever spent in a hotel . Complained to the night staff on the second night, who said they would look into it , it did get a little better but started again , would not stay againMore

Good Morning, Thank you for taking the time to leave feedback regarding your stay here at The Weathervane Hotel. We find it so beneficial to know exactly what our guests liked about their stay, and the things they didn't like so much. Please accept my sincere apologies for your disturbed nights sleep due the the guests staying above. If ever you decide to stay with us again please request an upper floor room and we will make sure this is granted for you. Once again Many Thanks for your feedback.

Report response as inappropriateThank you. We appreciate your input.
This response is the subjective opinion of the management representative and not of TripAdvisor LLC
See all 508 reviews
Payments made by partners impact the order of prices displayed. Room types may vary.
Nearby Hotels 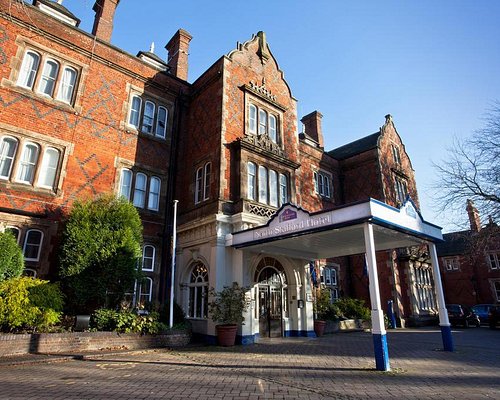 Excellent staff although housekeeping could have paid more attention to detail rather than us troubling reception/ night staff for items needed. The shower in room 24 was one of the best I have ever experienced in any hotel. The beds however could take a leaf from Premier Inn mattresses.

Hi there George, thankyou for taking the time to leave us a review! We appreciate it, thankyou again for the feedback we will take it on board.

Report response as inappropriateThank you. We appreciate your input.
This response is the subjective opinion of the management representative and not of TripAdvisor LLC
PaulaB3848
Newhaven, United Kingdom
51
Reviewed 4 September 2020
The Staff make this place 😀

Clean and comfortable hotel and a great base for visiting Alton Towers. The restaurant has a great variety of dishes to choose from all at a good price, made even better by the offers they have and we had eat out to help out too.
The staff are all very friendly and helpful. Big shout out to Terri for helping with our earphones that were left behind - back in the ears of the teenager now!

Hi Paula,
Thank you for taking the time to leave this lovely review for us here at The Weathervane. We are pleased you enjoyed your stay and I'm glad your teenager now has earphones in. We do hope to see you again soon.

Report response as inappropriateThank you. We appreciate your input.
This response is the subjective opinion of the management representative and not of TripAdvisor LLC
066007
Norwich, United Kingdom
2711
Reviewed 1 September 2020 via mobile
Long Weekend

Hotel was clean and the rooms were a reasonable size. Staff were very friendly and helpful. Bed was very comfortable and the shower was powerful and hot. The furniture in the our room is old and worn and needs refurbishment. We were in room 7 on the ground floor. The floorboards in the room above us must have been very creaky as we could hear every step they took as they walked around. It can be quite noisy at night as there is a McDonald’s just over the road which seems to attract all the local kids and their noisy cars. Which we had revving at 2 o’clock in the morning in the car park. Handy if you don’t mind noise and like a McDonald’s. Tesco’s is also very close and handy if you forgotten something or need fuel. If you like a cooked breakfast you’re better off going to Tesco’s then eat here, much better value. Although the burgers at lunchtime were brilliant.

Good Morning, Thank you so much for taking the time to leave feedback regarding your stay here at The Weathervane Hotel. We love to know what our guests liked about their stay, and the things they didn't like so much. I really hope if ever you are visiting Stoke-on-Trent again you will decide to stay with us again. Many Thanks.. The Weathervane Hotel.

Report response as inappropriateThank you. We appreciate your input.
This response is the subjective opinion of the management representative and not of TripAdvisor LLC
W9924JLwendyh
2
Reviewed 27 August 2020
Lovely Stay :)

We stayed 1 night to visit Alton Towers the next day, this Hotel is great value for money , very friendly welcome on checkin and the receptionist looked after us because we needed a sofa bed making up (thank you). The food was good and fast service. The room was nice and clean. Thank you

Report response as inappropriateThank you. We appreciate your input.
This response is the subjective opinion of the management representative and not of TripAdvisor LLC
X8984XFscottt
1
Reviewed 24 August 2020 via mobile
Food

Food and service was very very good. Would come again and recommend it. We had steak which was cooked perfectly and kids had the burgers which kept them quiet lol. Price was great for the food and service

Good Afternoon Scott. Thank you so much for taking the time to leave feedback regarding your visit here at The Weathervane. I am so pleased you and your family enjoyed your food. I really hope you will visit us again soon. Many Thanks The Weathervane

Report response as inappropriateThank you. We appreciate your input.
This response is the subjective opinion of the management representative and not of TripAdvisor LLC
View more reviews
PreviousNext
123…85