USD 290
View deal
Booking.comUSD 303
PricelineUSD 303
HiltonUSD 303
View all 19 deals
Prices are provided by our partners, and reflect total costs of the stay, including all taxes and fees known to our partners. Please see our partners for more details.
Payments made by partners impact the order of prices displayed. Room types may vary.
daniellej374
24

Outdated 1980s decor, dirty and run down. Noisy. Holes in the bathroom wall. Curtain fixtures are broken. How this claims to be a 5 star hotel is beyond me. Makes my skin crawl. Building exterior and interior both need a major face lift. Never again. More

Thank you for providing your feedback on your recent stay.

We are very sorry to learn of your disappointment with your recent stay. I can only offer my sincere apologies for any inconvenience caused to you regarding the issues highlighted.

The satisfaction of our guests is very important to us and we will take all your comments on board.

Please be assured that guest feedback is very important to us and your comments will not go unnoticed.

We hope to have the opportunity to welcome you back to one of our hotels for a more positive experience.

Report response as inappropriateThank you. We appreciate your input.
This response is the subjective opinion of the management representative and not of TripAdvisor LLC
See all 4,083 reviews
Payments made by partners impact the order of prices displayed. Room types may vary.
Nearby Hotels 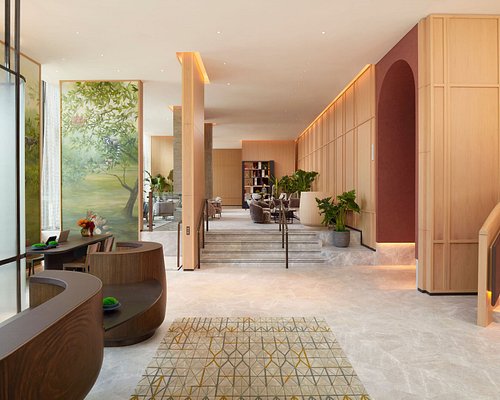 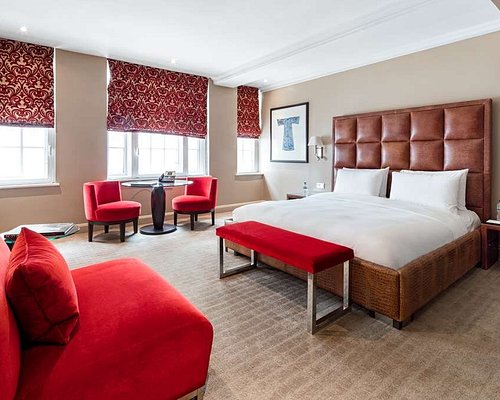 On arrival we were a bit early so we were directed to the 28th floor bar area, where we had 2 glasses of champagne overlooking the sights of London £38 for 2 glasses, I suppose its what you would expect! When we went down for our afternoon tea we were shown to a table in what is normally the 'breakfast' dining room. Well, it was a bit canteen like all brown and beige and tired looking. There was no atmosphere at all, not even a little quiet music in the background, just the sounds of plates clattering and a small child in a highchair who made a lot of noise for whole time we were there. The service was OK is, I had to ask for another teapot as the one i was given wouldn't pour and leaked, the sandwiches and I use the term loosely were 1 inch square bits of bread with a little bit of something on the top, if you put them all together if was just a about 1 slice of bread, the cakes well this was a 'chocolate afternoon tea' of the selection of cakes (10) 2 were chocolate, so not really as billed. We had to ask for more tea when you think they would check and ask if you wanted anymore. So overall for what is billed as a 5* package it was poor

Thank you for taking the time to leave your review.

We are sorry that we were not able to provide you with a more positive overall experience on this occasion.

The satisfaction of our guests is very important to us and we will take all your comments on board.

You may wish to reach out to our Customer Care teams to discuss any concerns regarding your stay. Our agents would be happy to assist. Contact details may be found via the website.

We hope to be able to welcome you back for a more positive overall guest experience.

Report response as inappropriateThank you. We appreciate your input.
This response is the subjective opinion of the management representative and not of TripAdvisor LLC
J C
New Orleans
616
Reviewed 28 August 2019
Smelly, Smoky and Filthy

The rooms are not clean and smell of smoke and dirt. The decor is very early 90's. Cheap furniture. Lobby boring AF. Breakfast mundane and lacking. The staff at the REception and at breakfast and lounge are pleasant and willing to help but are limited by the lackluster tools Hilton or ownership seemingly provide. The staff tried - they truly did. The smell of residual smoke has made me ill with a sinus infection. To be a Park Lane hotel ... one would expect a slightly elevated experience .. even from a Hilton. Compare prices because there are hotels that are far better for the same if not better price point.

Review collected in partnership with Hilton Hotels & Resorts
This business uses tools provided by Tripadvisor (or one of its official Review Collection Partners) to encourage and collect guest reviews, including this one.
Ask J C about London Hilton on Park Lane
8  Thank J C

Thank you for taking the time out to share your Hilton experience with us.

We regret to be informed that this stay did not meet the Hilton standard. Please rest assured that your feedback is valuable and we have taken on board the issues you have raised.

Your comments in regards in regards to the condition of the rooms and the smell will be shared with the head of our house-keeping department. We are sorry that we were not able to provide you with the quality of services and amenities you deserve.

We would like to take this opportunity to thank you for your kind words towards our team members.

We do understand that you many many options however we are honoured that you have chosen us. We hope to be given the chance to welcome you back for a more positive Hilton experience.

Report response as inappropriateThank you. We appreciate your input.
This response is the subjective opinion of the management representative and not of TripAdvisor LLC
Dotty22
Melbourne, Australia
2077
Reviewed 27 August 2019
Awful afternoon Tea

We were bought afternoon tea as a gift. The voucher states the dress code as being smart/casual ...no trainers or flip flops.
We arrived to find people sat in football shirts and flip flops like a motorway cafe. There was a used knife on the floor from a previous guest and the wall paper was peeling next to us. The staff didn't offer a particularly warm welcome and the sandwiches were poor and the scones were dry. In fact we literally just ate and left as we didn't want to stay a minute longer than necessary.
When I visited the ladies, I was so appalled by the state they were in I reported it to Reception. The toilets clearly hadn't been checked for some time. Based on our brief experience, if you are looking for a luxury hotel- there are many others in London we would prefer to give our custom to.

Thank you for taking the time out to share your experience with us.

We apologise that you feel like you were misinformed, please rest assured that this is not the lasting impression we would like to give to our valued guests.

We regret to be informed that you were not happy with the service provided by our staff and the condition of the bathrooms. We will take your comments on board and share them with the relevant team to avoid similar situations from occurring in the future.

We hope to have the chance to welcome you back for a more positive Hilton experience.

Report response as inappropriateThank you. We appreciate your input.
This response is the subjective opinion of the management representative and not of TripAdvisor LLC
rpcook_offers
Deerfield, Wisconsin
813
Reviewed 27 August 2019
An Extremely Frustrating Weekend Stay.

I was really on the fence about writing a review here about this, because I very much dislike being negative.

Unfortunately, I had to make an exception here, due to just how badly I was treated during a honeymoon trip/stay.

I'm going to summarize as much as I can, condensed down.

I also know this was peak season, as well as a major poker tournament going on, but some of these are just inexcusable.

- Upon pulling up to the hotel to have a valet grab our bags after a long drive through London in rush hour traffic to arrive, was totally ignored for other clients arriving.

- The Entertainment/TV console was haphazardly hanging from the back of the TV, and did not function until we repaired it.

- The first night, I had thought that the sheets on the bed felt 'damp', but put it out of my mind. The next day after they completed cleaning/changing, the bedsheets were quite obviously wet, and confirmed by two others that it wasn't just me.

- Because there were no other options, they attempted to move me from one room to another on the same floor. However, it was not the same room we had previous, and facing an entire different direction. Ended up moving everything back into the original room, and to just deal with the smoke smell. They did change out the sheets.

- After contacting a friend with major accounts with the Hilton brand, who also just so happened to be attending a conference for them by Hilton, was able to get this escalated, where management the last day finally reached out to me. But by this point, not a lot could be done as we were leaving the next morning.

I was extremely frustrated by the entire ordeal, and ended up having to spend half of my Saturday night going back and forth with these rooms and trying to get someone to at least listen and do something.

I do have to give the hotel one thing though, the location and view from where we were was absolutely stunning.

With everything we did there in London, the experience in the hotel just left a sour taste in my mouth.

After staying in many smaller and specialty hotels/suites around now who actually go out of their way for you, I'd highly recommend finding something like that around here.

Thank you for taking the time to share your Hilton experience with us.

We regret to be informed that this stay did not meet the Hilton standard. We apologise for the inconvenient smell during your stay and we are sorry we were not able to provide you with the quality of services and amenities you deserve.

We hope to be able to provide you with a more positive experience and restore your faith in our brand should you choose Hilton in the future.

Report response as inappropriateThank you. We appreciate your input.
This response is the subjective opinion of the management representative and not of TripAdvisor LLC
EmiA02
London, United Kingdom
1742
Reviewed 27 August 2019 via mobile
Afternoon Tea

Got a champagne afternoon tea on groupon - very good price! Loved the sandwiches, cakes and scones! Food was amazing but service wasn’t. Had to ask multiple times for things...different servers the whole afternoon. Sadly I didn’t leave a tip because of this.

This review is the subjective opinion of a Tripadvisor member and not of TripAdvisor LLC.
View more reviews
PreviousNext
1…414243…