Great place for a stopover - Review of La Paix

USD 90
Free cancellation until 19/03/21
View Deal
Agoda.comUSD 91
ZenHotels.com
Expedia.com
Hotels.com
eDreams
Travelocity
View all 12 deals
Prices are provided by our partners, and reflect total costs of the stay, including all taxes and fees known to our partners. Please see our partners for more details.
Payments made by partners impact the order of prices displayed. Room types may vary.
MrsH104
Royal Tunbridge Wells, United Kingdom
5053

Great place for a stopover

We’ve always been very satisfied with various hotels in the Logis de France chain over the years; Hotel la Paix was no exception. We had a triple room (double bed for us plus single for son) for €88 which was excellent value. The room was spacious and spotlessly clean. The only slight niggle was that with the hot weather we would liked to have had the window open, but with a flat roof outside we were a little concerned over security. The free WiFi was as fast as we have at home - far better than the campsite where we stayed the previous week!

Dinner was amazing (see separate review) and the breakfast spread was very hearty for €9 per head.

This is best described as a traditional local hotel. As a middle-aged couple with a child we were rather in a minority, and probably the youngest guests by 25 years. Nevertheless the welcome was warm and genuine for all; whether English, French, German or the many other nationalities staying there. More

Show less
Trip type: Travelled with family
See all 111 reviews
Payments made by partners impact the order of prices displayed. Room types may vary.
Nearby Hotels 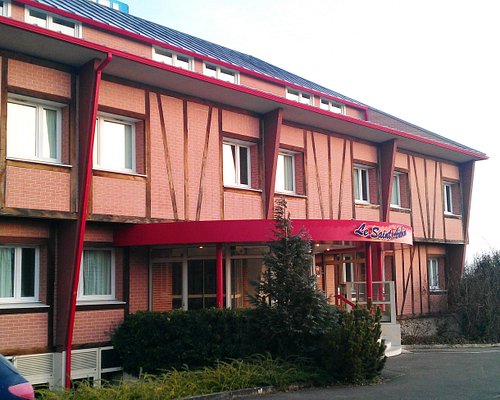 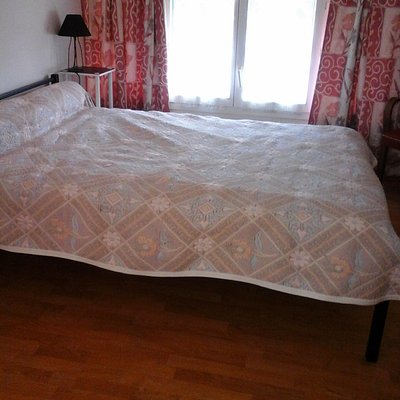 I spent two nights with friends as this pleasant and friendly hotel, which is close to the town centre and has a large car park. My room was comfortable and well equipped.
The restaurant was excellent and we had two first class evening meals in it. The breakfast room was pleasant and the food fine but the choice was a little limited.

We spent a night at the Hotel la Paix, which was pleasant and comfortable. Their dinner was particularly good: unusual dishes, a spacious and again comfortable dining room, warm service. We will stay there again.

This review is the subjective opinion of a TripAdvisor member and not of TripAdvisor LLC
jrfranci1
Royal Wootton Bassett, United Kingdom
277
Reviewed 12 September 2018
1 night stop over

The rooms were slightly on the smaller side, but were well presented and clean.
The hotel was easy to find and had ample secure parking.
The restaurant at the hotel was of a high quality at a reasonable price.

Great hotel in a central location. Secure parking, friendly staff and a good restaurant with rustic French food. Service was great and the rooms were very clean, comfortable and great value. We will definitely stay again.

This review is the subjective opinion of a TripAdvisor member and not of TripAdvisor LLC
jj-the-jetsetter
Dartford, United Kingdom
486621
Reviewed 9 September 2018
Don't expect 4 star when you are paying this price, its fine, and we're used to much pricier

Town is off the beaten track, but still within reasonable reach of the Rouen-Abbeville autoroute. We passed a huge casino at the edge of the town, but weren't able to visit : the town itself was dead on a Sunday night!

The Rue de Neufchatel entrance is very narrow, there is a much wider one at the other end of the large car park (West up Rue de Neufchatel, left and first left), but the gates get closed after 10pm and you need to ask for a code. The same with the front door, although the owner didn't realise we had gone out of the hotel for a promenade after dinner, and whilst we could get into the foyer using another code, he had locked the inner doors and we had to bang to get let in eventually, much to his chagrin.

Spacious room - no British TV channels as usual in France but large en-suite with good shower - he had upgraded us for no extra price - 65 Euros was very reasonable indeed, with an adequate but not luxurious breakfast a further 9 Euros each.

I was very happy with my £18 menu dinner of rabbit compote, and followed by guinea fowl, but Nina felt her lentil soup had no taste and didn't like the consistency of her guinea fowl - it was more like a cooked chunky pate which she was not expecting, rather than a tranche or whole one. Desserts were fine, and service adequate.

Outside there are extensive gardens and a separate smoking bower., even though you are a couple of minutes walk from the main square.

Certainly a stopover to remember for the future amidst lovely rolling countryside.