USD 56
View deal
Hotels.comUSD 49
FindHotelUSD 49
eDreamsUSD 53
View all 14 deals
Prices are provided by our partners, and reflect total costs of the stay, including all taxes and fees known to our partners. Please see our partners for more details.
Payments made by partners impact the order of prices displayed. Room types may vary.
Kate W
San Francisco
1

Pleasant hotel right on the beach

The room was well appointed, and ours had a beautiful ocean view. (The hotel has one side facing the ocean, the other facing the street.) Air conditioning worked great (and was needed - it's hot there in July). The waves are rough on this part of the beach, so it was hard to go into the water for older people (lots of boogie boarding with teenagers going on, though). Kind of wish we had gotten a hotel on the calmer beach in Melaque/San Patricio instead.

Noise level was mostly ok, except for a couple nights where the folks next door had their tv on very loud.

The hotel has a wonderful restaurant, Bananas, where we ate breakfast every day while looking at the ocean.

Biggest downside for me was that though there was coffee starting at 7 and hot water 24 hrs, no milk was available without going to the restaurant, which opened at 8. And no coffee maker in rooms. This seems standard for Mexico, but was a hardship for me and my husband. Plus, no refrigerator in room. (Some may have had them, but not ours.)More

Show less
See all 106 reviews
Payments made by partners impact the order of prices displayed. Room types may vary.
Nearby Hotels 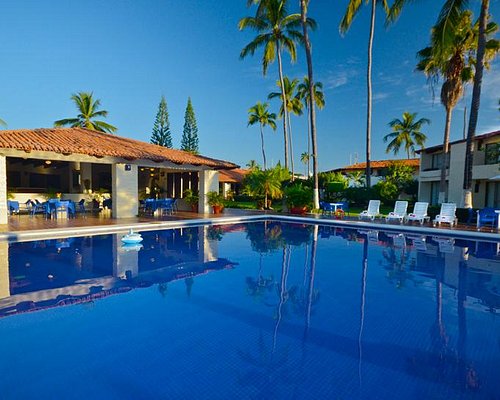 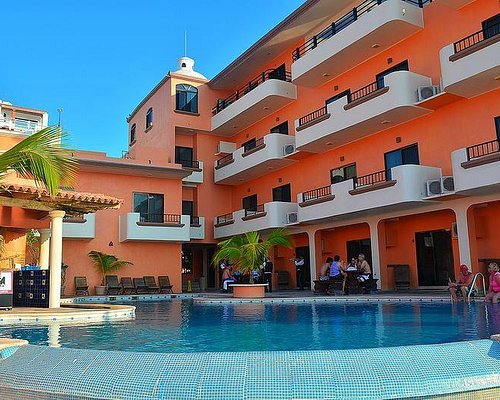 We stayed here one night on a day trip. The rooms were clean with an amazing view from the deck. Breakfast at bananas is not to missed. The staff were very helpful given our very minimal Spanish knowledge.

This review is the subjective opinion of a Tripadvisor member and not of TripAdvisor LLC.
Rob F
Prince George, Canada
4546
Reviewed 3 January 2019
A new experience

OK, we spend time in PV and quite a bit of the winter. Time for a change. We decided to take the first class bus to Barra de Navidad and meet some friends at this hotel. Good- clean, nice pool, friendly staff, wi-fi and located a block or so from any busy road. Bad-- nothing really except don't expect a 3 or 4 star hotel. It seems old but that isn't always bad. Barra itself is a VERY young PV. It is fun, small, and easy to navigate. Restaurants are great and inexpensive and you just get a good feeling being there. Primera plus is the first class bus and they are great. Do not be afraid to use this business as it will be better than you expect.

This review is the subjective opinion of a Tripadvisor member and not of TripAdvisor LLC.
Lolo50
Winnipeg, Canada
4173
Reviewed 26 December 2018
Early December stay at Hotel Barra de Navidad

Spent 5 nights in early December at this hotel and it was great! Very clean room....amazing balcony which gave the best view of the bay. Spent many hours by the pool which is very well maintained and clean. Enjoyed time at the Pool Snak Bar too. Our maid was the best! She kept the room super clean and tidy for us....made sure we had lots of towels, etc....and had the nicest smile ever! I do apologize to staff as my Spanish is very limited and at times it was hard to communicate. I hope I made up for it with smiles and saying Hola and Gracias a lot! :) Another thing to note is that everything is within walking distance of this hotel. The Bananas Restaurant is conveniently located in this hotel and has wonderful food and service. And there are many other fine eating establishments within close proximity. Ramons is just across the street....Loco Loco (best pizza in Mexico as far as I'm concerned!) is just a block over. Walked down to the Malacon to watch the lighting of the Christmas tree. I can't say enough good things about our stay. Thanks for everything!

Room tip: Rooms on the ocean side have beautiful balconies/views.Ocean rooms are a few $'s more per night and are worth it!
Ask Lolo50 about Hotel Barra De Navidad
Thank Lolo50

This review is the subjective opinion of a Tripadvisor member and not of TripAdvisor LLC.
Gcruik
Menlo Park, California
295137
Reviewed 12 December 2018
On the beach

Nice room. Great view. The staff was less than excited to see and serve us. Room needed standard maintenance. Do not try to swim in the area by the hotel, unless you are a strong swimmer. Enter the ocean down on the far left where the surfers are.

This review is the subjective opinion of a Tripadvisor member and not of TripAdvisor LLC.
victoriasN5399WO
Seattle
31
Reviewed 20 July 2018
Fell on very humid slick tile deck

Came here because friend recommended based on location and Trip Advisor, but last minute took bus from Puerto Vallarta. Was not given the TA price but had not made rez and hotel was not full. Sound of waves was wonderful and immediately walked out on deck...1 foot onto deck and it went out from under me as the humidity made the tiled deck very slippery. My knee swelled up immediately...hobbled down to desk to be told there was no ice upon request. Not help what so ever and no concern or follow-up. Stayed another night but couldn't manage stairs so checked out and went to hotel next door which gave me TA rates...and ice!! Room ample, moldy smelling, said there was wifi but there wasn't (got on after midnight sometimes..ok in other hotel nextdoor), plasticy bedspread.