First time for everything - Review of Privilege Aluxes

USD 271
View deal
TravelocityUSD 289
Expedia.comUSD 289
PricelineUSD 291
View all 19 deals
Prices are provided by our partners, and reflect total costs of the stay, including all taxes and fees known to our partners. Please see our partners for more details.
Payments made by partners impact the order of prices displayed. Room types may vary.
CaraMacRyan
1

First time for everything

My husband and I came here for my birthday and as a getaway for a honeymoon we never had. It was very nice and the staff was great! The servers were very friendly and accommodating. Hope to return soon!!More

Thank you for taking the time to provide your feedback regarding your stay with us.
It is a pleasure to read that you had memorable getaway and that you will return!
We are looking forward to a new opportunity to welcome you to Privilege Aluxes, Isla Mujeres and the desire to give you the best of our attention again.

Report response as inappropriateThank you. We appreciate your input.
This response is the subjective opinion of the management representative and not of TripAdvisor LLC
See all 3,996 reviews
Payments made by partners impact the order of prices displayed. Room types may vary.
Nearby Hotels 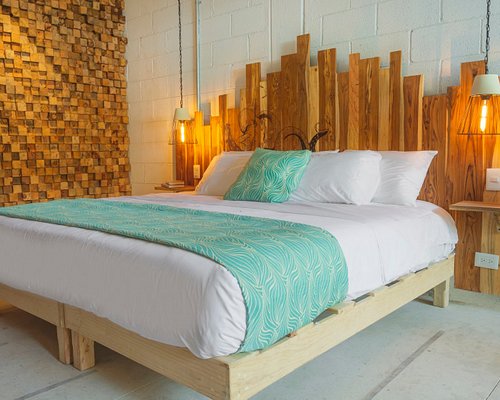 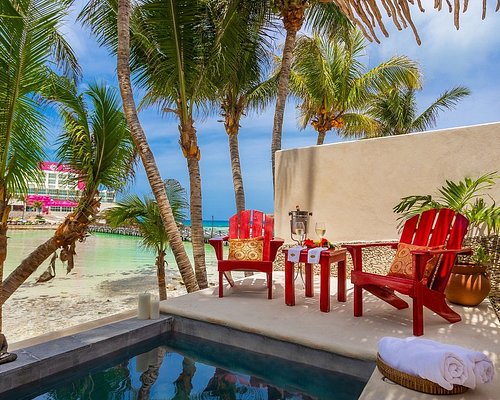 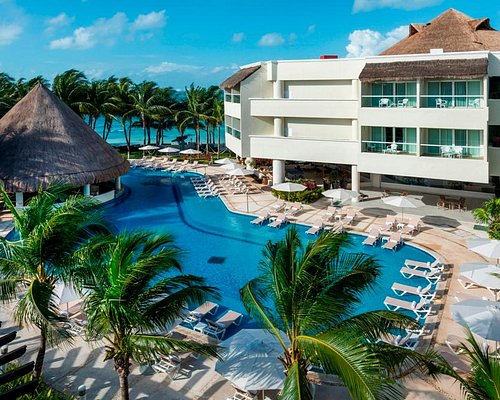 I stayed only for 5 days but was one of the best times of my life. people were friendly, the food was amazing ! the weather even more so. The first night we had a room close to the street and so we requested it be changed and they did so with no fuss. The whitest sand and the most turquoise / aqua water iv seen. I caught a nice tan and met lots of friendly people too ! :) will definitely be going back

Room tip: Choose the rooms that are on the far end next to the hotel next door as these are quieter and have nice views of the beach and sunset
Ask 147jazminek about Privilege Aluxes
Thank 147jazminek

We really appreciate that you took the time to share a great review.
We will share your comments with our team, who certainly will be encouraged by your remarks.
It is an enormous pleasure to know the satisfaction of our customers, because this is our aim, give you an unforgettable experience, being satisfied and making you feel at home.
Looking forward to welcoming you back to your home in Isla Mujeres soon!

Report response as inappropriateThank you. We appreciate your input.
This response is the subjective opinion of the management representative and not of TripAdvisor LLC
Nellec
Roanoke, Virginia
3312
Reviewed 14 March 2016 via mobile
Honestly!

In my opinion, this is NOT a 5-star hotel for 4 reasons:
1. The food is very mediocre. The "egg" lady at breakfast is good, though.
2. The TV is nonexistent. This may seem trivial but we enjoy keeping up with the news, at least, and we like to relax with it, too. For a resort that accommodates a majority of Americans, better access to current English-speaking programming seems a no-brainer.
3. Our suite was huge but lacked any feeling of accommodation. There were no drawers and inadequate storage. I had to put clothes in the kitchen cabinet! There was a full galley kitchen with absolutely no equipment, not a spoon, plate, napkin. I was appalled and disappointed.
4. We found that the front desk staff could have been nicer, although this is not major.
5. I very much look forward to working out on trips. This hotel
listed a "gym" as an amenity. This small room was extremely ill-equipped. Another disappointment!
We did enjoy the pool and the beach was beautiful. We also slept well.The housekeeping staff and wait staff were extremely efficient and maintained a very clean facility.
I could go on, but this is enough!

Thank you for sharing your comments, we value your feedback to help us improve the product that we are offering. It is very important to us that we keep growing and working to do our best to meet all our guests needs.
We strive to provide value based vacations so we would love to welcome you again to offer our best service.

Report response as inappropriateThank you. We appreciate your input.
This response is the subjective opinion of the management representative and not of TripAdvisor LLC
Oysterman2013
Murrells Inlet, South Carolina, USA
2836
Reviewed 13 March 2016
Relaxing Stay

Very nice hotel. Staff is friendly and helpful. Rooms are very comfortable and clean. Had nice hot tub outside room. Nice sandy beach at hotel. Short walk to town. The buffet breakfast is fantastic, best I have ever had.

Thank you for taking the time to provide us with your feedback.

We are glad we were able to satisfy all your expectations regarding the room, location, food and especially our staff as that is our key element.
The comments as well as the observations and feelings of our guests are of great importance to us, as we count on those in order to achieve the highest level of service possible.
Looking forward to welcoming you back to paradise soon!

Report response as inappropriateThank you. We appreciate your input.
This response is the subjective opinion of the management representative and not of TripAdvisor LLC
karenf05
Naples, Florida
1748
Reviewed 12 March 2016
Best Vacation Ever!!!

I visited this property with a group of friends for spring break and stayed at the pool suite. We stayed from 03/06-03/10 and I have to say i had the best time ever. The service was excellent from the time we checked in till the time we checked out. The staff was very attemptive and courteous. Our room had a gorgeous view and of course the pool and the welcome bottle made it extra special. This property is very adult oriented and very relaxing, the beach is truly amazing and if you walk towards playa norte it gets even more beautiful.

We rented golf car and went around the island and again its very laid back. At the beach u can order food from there without having to dress up and go to the sitting area. Another great service is the fact that they bring u bottle beer to your chair at the beach. I have visited Mexico over 10 times and this is not very common. My parents are regular guests at this property and I was amazed how they remembered my family. Most of the management were there to welcomed us.

Some of the employees that made our stay memorable were : Luis, Sergio, Alex, Jorge, Christian, Omar, Marcos, Gaspar, Ricardo, Jair, Nataly.

At the reception: Olivia, Jesus, Jaime.

And special thanks to general manager Humberto, he went above and beyond to make sure we were having a great time and taken care of at all times.

Planning to come back in May and August, wouldn't stay anywhere else in the island!

Thank you so much for your kind words. It is so flattering to read about experiences like yours. Thank you for giving Privilege Aluxes the chance to offer you such a wonderful experience.
About our staff, we are very proud because we know that the guest experience depends on the good personal contact.
We are honored to be your favorite place to stay in the island!
Looking forward to welcoming you back soon!

Report response as inappropriateThank you. We appreciate your input.
This response is the subjective opinion of the management representative and not of TripAdvisor LLC
Mike L
Minneapolis, Minnesota
23
Reviewed 11 March 2016
Beautiful and Accommodating

We vacationed from February 20-27 at the Privileges Aluxes in Isla Mujeurs with a large group of 16 from the Midwest – 12 of which we met at our destination. The hotel was beautiful, very clean, and modern, and the staff was very courteous and accommodating. Upon check-in, we were given immediate upgrades from our standard rooms to a junior and honeymoon suite…we were ecstatic - totally unexpected.

The room service was impeccable with towel and flower decorations adorning our suite everyday. While 11 of 16 people in our group became ill sometime during their stay, there were five of us that did not have any symptoms. We all ate from the same restaurant, drank the same liquor, so to blame the food as suspect for the illness that occurred, well, it’s up for debate. Could it possibly have been an airborne virus that was transmitted enroute? Possibly…after all, four groups of us all arrived on different aircraft, different days and times. The only thing I would question is the refrigeration methods of the food served by the swim-up bar, which was a little concerning, but it still didn’t seem to keep people away from their mid-afternoon snack of fish tacos, hamburgers/fries and chicken wings. We were also privy to a full-service menu on the beach which seemed to satisfy all. Overall, I found the food selection at the hotel immense and delicious.

As for the weather – it’s just something you can’t control, but certainly could be compared to the Pacific side, which seems to be warmer and sunnier at that time of year. As for location, I guess being located next to a cemetery and a school is not the preferred location for those booking a 4 or 5 star hotel, but when the island is only 17 miles around, got to put them somewhere. Personally, it didn’t bother me, and we found the location to be most convenient to the “market street” which came alive at night with great music and food of all ethnicities. In conclusion, it’s hard to know the real reason for the outbreak of sickness at Privileges. I am sympathetic for those whose vacation was anything but pleasurable. But, I will not give it a bad wrap – for the most part, our family had a great time and this episode will not prohibit us from venturing to the island in the future.

Room tip: If you have a special request, mention it at the time of booking. They seem eager to accommodate.
Ask Mike L about Privilege Aluxes
3  Thank Mike L

Thank you very much for choosing us to enjoy this beautiful island.
We wish to express our sincere appreciation for your contribution with your comments.
The consistent feedback and support at the same time that we get from you help us to scale new heights.
The hotel always maintains strict hygiene and food safety policies to guarantee the highest standards. We do have unannounced visits on a regular basis from international company Preverisk that test and certify food & water as well as the water in our swimming pools and rooms on daily basis, so far we have always had great results.
However and after this totally untypical situation we have maximized the sanitary measures although the issue was not proved to be a problem inside the hotel.
We would love to welcome you again to offer a flawless vacation.

Report response as inappropriateThank you. We appreciate your input.
This response is the subjective opinion of the management representative and not of TripAdvisor LLC
View more reviews
PreviousNext
1…236237238…