USD 97
View deal
PricelineUSD 122
Hotels.comUSD 97
Booking.comUSD 116
CheapTicketsUSD 97
eDreamsUSD 116
TravelocityUSD 97
View all 12 deals
Prices are provided by our partners for one room, with variable occupancy rules as provided by the property, and reflect total costs of the stay, including all taxes and fees known to our partners. Please see our partners for more details.
Payments made by partners impact the order of prices displayed. Room types may vary.
Kaine N
1

Review of Lembongan Harmony Villas
Reviewed 30 May 2017 via mobile

My family and I stayed here for 7nights. This place is beyond amazing!! If we could rate higher we would! The accommodation is perfect, view is one of a kind, clean, comfortable beds, air con in all rooms plus fans outside, clean pool, fridge refilled daily at local prices, free drinking water, good wifi, foxtel, safe, close to restaurants and beaches... the list goes on!! The villa manager Janu is amazing!! Provides you with a mobile and you can call him anytime plus all restaurants saved into the phone for easy dialling :-) Janu will assist with anything you require eg booking tours, scooters, recommendations!! We will be returning soon with our family and recommending to all our friends!! We had the pleasure of meeting the owners who are genuine and do everything to ensure you have a great time!! More

Hello Kaine, Yvonne and Kids.
We loved having you at our Villas and Yes please bring other family and friends with you on your next return trip. A big Hi Five to little Mack from me.
Kind regards
Janu

Report response as inappropriateThank you. We appreciate your input.
This response is the subjective opinion of the management representative and not of TripAdvisor LLC
See all 187 reviews
Payments made by partners impact the order of prices displayed. Room types may vary.
Nearby Hotels 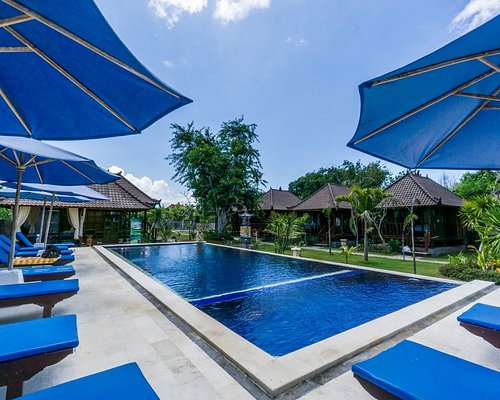 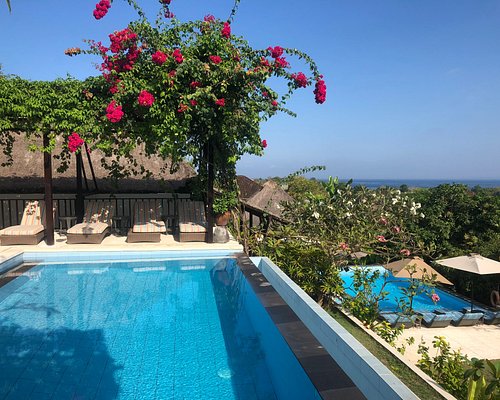 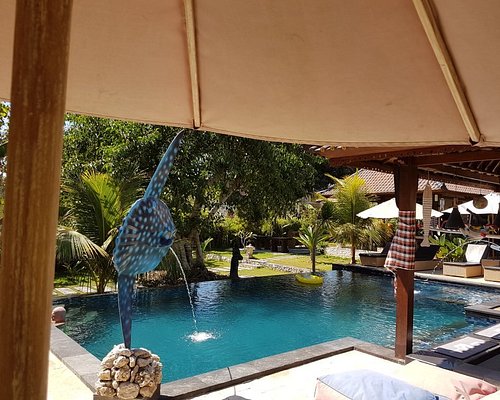 These villas are perfectly located overlooking the Jungut Batu beachfront and the Badung Strait looking onto Mount Agung. The villas are very well presented and very clean. The Manager Janu is awesome and very accommodating with anything that you need. There are many fantastic close restaurants that you can walk to or you can book to be picked up (and returned) by other restaurants, not so close to the villas. This is our third time to Lembongan and will continue to stay at Harmony.

Hi Brad good to hear you had a fabulous stay again at our Villas, we cannot wait for you to return again soon.
Regards

Report response as inappropriateThank you. We appreciate your input.
This response is the subjective opinion of the management representative and not of TripAdvisor LLC
SueH1554
78
Reviewed 29 April 2017
Amazing View

Amazing view you never get tired of looking at it. The Manager Janu is awesome nothing is too much trouble. We stayed in Villa 1 which has the 2 bedrooms the staff do an great job the villa is clean and well kept and the fridge is never empty. The infinity pool is awesome you can seat in the pool and soak up the view. When you arrive you are giving a mobile phone this is a fantastic idea you can contact restaurants to book and be picked up and you can easily contact the Manager Janu . We will definitely be back.

This review is the subjective opinion of a Tripadvisor member and not of TripAdvisor LLC.
Donna G
103
Reviewed 24 April 2017 via mobile
Amazing view !!!!

The view needs to be seen to be believed. Wonderful hosts Pete and Carol and Manager Janu. Infinity pool and poolside bar are a great spot for relaxation after exploring this beautiful island. Motor bikes are a must for island travel which can all be arranged by Janu. Lots of beautiful restaurants close by that will also do pick up and return.

This review is the subjective opinion of a Tripadvisor member and not of TripAdvisor LLC.
ColinWhittaker
Cusco, Peru
1218
Reviewed 19 March 2017 via mobile
Fantastic accommodation on a spoilt Island

There was some building working going on but didn't spoil our stay at the Harmony Villas.

The staff at the villas were fantastic, very helpful and arranged our transfers to and from the airport, so a special thank you to them

The thing that spoilt the stay for myself and the wife. was the amount of traffic on the, narrow roads. especially scooters and motorbikes. We were there out so season but still the streets where full of traffic.

Mixed in with the traffic are pedestrians!

After spending time in Bandung before a few days stay on Lembongan, we had had enough of traffic and motorbikes. So going to an Island that is only 4km long and 2km wide we expected it to be traffic free and quite. How wrong we were.

I enjoy running, however the 2 days I did run on the Island was hard work having to dodge oncoming vehicles. Once I had negotiated the vehicles it was then to run the gauntlet with the packs of dogs. Although most of the seem friendly there would be the odd ones that would bark, and chase after me. I think this was purely that they were unaccustomed to seeing anyone run. If a dog did make chase I just stopped running and walked until out of their site, which seem to pacify them.

Been to many different places in the world, but this isn't one I would be eager to go back to which is a shame as the accommodation was fantastic and the Island could be so much nicer without the traffic.

One suggestion I would like to offer if anyone in Lembongan reads this reviews, especially hotel and accommodation owners. Most of the locals on scooters etc I presume make their living from the tourist industry, waiters, cleaners, cooks etc for the hotels. Would it be worth a couple of communal buses circling the island al days so that locals and tourist alike could hop on and off then at any time of day to all parts of the island. Even though the roads are narrow a train like bus, like you would get at a large theme park ferrying people from the parking lot to the park entry gates?
This alone would cut the traffic down on the Island dramatically and the cost be collectively absorbed by the tourist industry or a minimal charge for tourist using the bus.

This review is the subjective opinion of a Tripadvisor member and not of TripAdvisor LLC.
S T
Adelaide, Australia
159
Reviewed 9 March 2017
A slice of paradise

Stayed with a group and had access to both villas. Very clean, comfortable and well serviced. Friendly & helpful staff with Janu making us feel very welcome & great with the kids. Best view in Lembongan, we could sit in the infinity pool watching our kids surfing at Lacerations. We hired scooters which we could just park at the back of our villas for easy access to the other side of the island.