USD 430
View deal
PricelineUSD 611
eDreamsUSD 611
Orbitz.comUSD 491
View all 13 deals
Prices are provided by our partners, and reflect total costs of the stay, including all taxes and fees known to our partners. Please see our partners for more details.
Payments made by partners impact the order of prices displayed. Room types may vary.
14dsk
Seoul, South Korea
33

Playing golf at a deep forest in Hokkaid was cool and nice for a retreat in hot summer. The package was moderate and the accomodation at the North Wing was nice. Golf was not crowded andthe courses were well maintained except River Course. Restaurants like OctoberFest was a bit crowded at peak time, but those at Tower seemed not. The resort is remote from the New Chitose Int`l Airport thus it took two hours by the Big Runs shuttle bus with 2100 Yen per one way. Overall, the place was nice for me to enjoy golf and natural environment with a comparable cost to other Asian countries.

Room tip: Tower is better but more expensive than North & South Wings. Early booking may get discount.
See all 795 reviews
Payments made by partners impact the order of prices displayed. Room types may vary.
Nearby Hotels 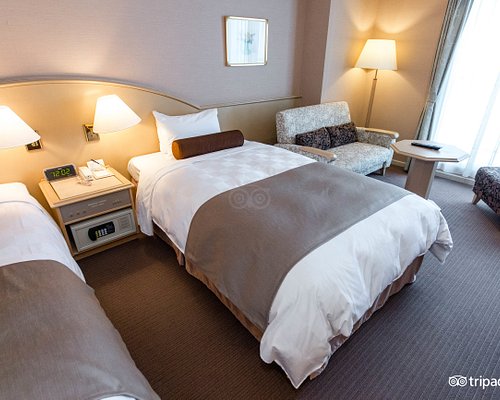 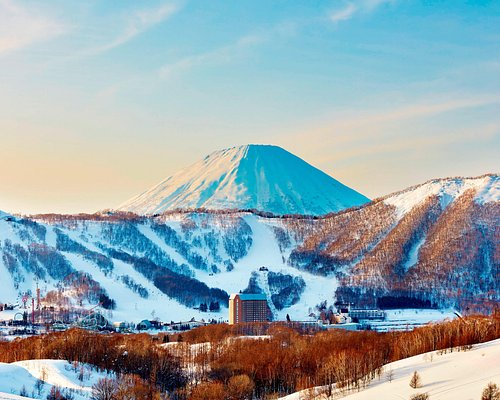 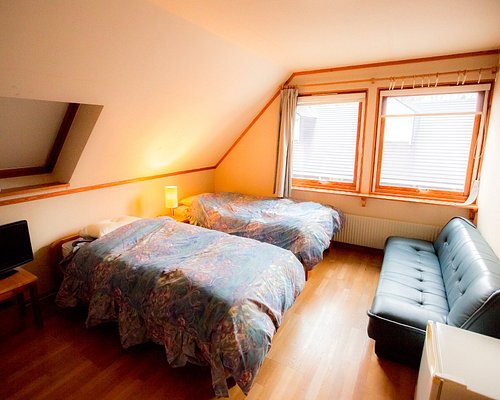 I visited Japan for a month the summer I turned 14 and my host family and I stayed here for a night. Between the carousel, the pool with water slide, and the shopping and dining right in the hotel, I didn't want to leave. Such a great time!

This review is the subjective opinion of a Tripadvisor member and not of TripAdvisor LLC.
halalfoodie2014
Singapore, Singapore
418
Reviewed 4 May 2014
Best halal Japanese food; great first ski experience

[Note to serious skiers - as an unathletic person and first-time skier, my review is not likely to be helpful to you if you're interested in the skiing part of the experience.]

We stayed at Rusutsu for three nights during the week before Christmas 2013. It was the beginning of the ski season so the resort was very quiet and room prices low. We stayed in a western style double room in the North Tower with two beds and a balcony. I think the resort was built in the 1980s, and it shows in the style and feel of the place. But it has been very well maintained and the rooms are well-appointed and comfortable. There is a separate room for the toilet, a mini fridge, water boiler, tea and tea cups, couch, coffee table and TV. I found the beds and pillows a little hard, but got used to it.

The most important aspect for me was the food, since we're Muslim and finding halal food when traveling can be a challenge. Rusutsu has several restaurants, and one of them has recently been certified as halal by the Malaysian Halal Corporation. This was one of the primary reasons we picked Rusutsu. The restaurant is called Sekkatei, one of the Japanese restaurants. The restaurant website advertises two halal set meals that can be pre-ordered. However, I contacted them in advance and asked if we could also pre-order breakfasts and lunches, and they arranged amazing halal Japanese meals for us three times a day, ranging from chicken udon sets to some special miso nabe with loads of seafood and meat. Everything was absolutely phenomenal. I lived in Tokyo for two years in the past and enjoyed the high quality of Japanese cuisine there (this was before I converted to Islam so I was eating everything) - the food we had at this restaurant is among the best Japanese food I have had. Every part of each meal was of the highest quality - from the rice to the seafood. My husband, who has never tried Japanese food before, has become the biggest fan of Japanese food since this trip. The service throughout our stay was top notch. The restaurant staff service was exceptional (if you don't mind being fussed over. I don't). Just a note for the budget conscious - the cost of each meal was fixed, around JPY 2000 for lunch and JPY 5000 per dinner per person. Breakfast was included in our package. But for the quality I thought the price was a good deal.

For skiing, we rented equipment from the resort and took two private lessons from the on-site school. Lots of English-speaking instructors, all very patient and good teachers. We were able to try a couple of runs on the beginner's slope after two lessons. All of our needs were met, we felt like we were in safe hands and overall really enjoyed our experience - so much so that we're planning to return this winter. On budget: lessons and rentals were not cheap - you can check out the price list for rentals and lessons on the Rusutsu website, so something to keep in mind. There's an independent rental shop across the street from the main entrance which appeared to have lower prices.

A few observations about the atmosphere (which some others have also noted) - there's not much of a nightlife here - it's very quiet at night; there may be a bar or two but they're so tucked away and quiet I didn't even notice. Also, the entire place is a little campy and 70s - like the singing tree at the bus drop-off lobby, animatronic singing dog jazz band, carousel with what appeared to be demon farm animals, and some kind of medieval themed shop fronts. There's also a large arcade room in the basement. I for one liked the campy-ness - it was a bit surreal yet charming, and I also enjoyed the quiet nights. I think this would work well for families, but may not be for everyone. Also, I don't think there's much of a town that's easily accessible from the resort. Although there's a ski rental shop and a few convenience stores across the road - 7 minutes' walk in the snow. There are also decently-priced convenience and souvenir stores in the resort.

One final note. We took the Big Runs shuttle bus to/from Chitose. On the way back to Chitose, my husband left his glasses in the bus. I sent them an email from Tokyo (where we were staying for a few days after) to ask if they could return it, and we got them within a few days for a reasonable delivery fee. I think they had even cleaned the lenses for us, since they looked cleaner than before! The bus was clean and on-time, with no fuss. No toilet on board, but we did stop each way for a bathroom break.

This review is the subjective opinion of a Tripadvisor member and not of TripAdvisor LLC.
Kelvin W
Singapore, Singapore
2020
Reviewed 10 April 2014
Nice Resort !!!!

Rusutu is a nice resort for the family., especially during the skiing season.especially when there is a packaged price for it with breakfast and dinner. we had a great time. the rooms weere well appointed wiith good amenities . the beds were ok and were clean. tho showing its age it is not runned down and the staff there work hard to make sure things are in tip top condition
the snow there is glorious very nice powder with great runs all over .paradise for snowboarders but skiers alike will revel in the great slopes with many runs for all experiences.
food is another point to note, all restaurants that were open to us served great food. very fresh and well cooked meats uusing their local varietals.not to be missed the resort call rusutsu .

This review is the subjective opinion of a Tripadvisor member and not of TripAdvisor LLC.
endlesslift
Chiba, Japan
6539
Reviewed 14 March 2014
Best Ski resort in Hokkaido for family

Closer to Chitose airport by 40min., than Niseko area.

Operated by single company which result in well established facilities and relatively good service everywhere. Newest Tower Hotel is built in 1993 but still holds superb atmosphere if you compare with other ski resort hotels in Japan. Best for children under 10 years old since they have fun swimming pool and big carousel inside the hotel.

The ski areas are not ideal which all areas locate between altitude 400m-1000m compared to Niseko. You can not expect really long runs but area is wide enough to offer many runs that you can enjoy for days.
English speaking instructors for both SKI and SNOWBOARD are available.

Only thing they lack in is probably the night life since, only place you can enjoy up to 24:00 is izakaya style place KAKASHI.

This review is the subjective opinion of a Tripadvisor member and not of TripAdvisor LLC.
yo-powder
Tokyo, Japan
28
Reviewed 10 March 2014
Highland lodge - do not stay

Very stingy old room, stained carpet, bugs, with plumbing that backflows. It really not much better than $30/night motel. Dining option is quite limited. I would probably stay in Niseko area and spend drive to ski at Rusutsu.

This review is the subjective opinion of a Tripadvisor member and not of TripAdvisor LLC.
View more reviews
PreviousNext
1…323334…