USD 71
View deal
Trip.comUSD 71
Booking.comUSD 76
Agoda.comUSD 76
View all 15 deals
Prices are provided by our partners, and reflect total costs of the stay, including all taxes and fees known to our partners. Please see our partners for more details.
Payments made by partners impact the order of prices displayed. Room types may vary.
Brungford
Torquay, Australia
170165

Value for the money for a budget Hotel

We found the receptionist very helpful and check in was easy. The rooms are not flash and a little dated but clean with plenty of room. Breakfast was average with a reasonable selection.You can walk to some duty free shops - full of chocolate, suitcases and alcohol. There was also a good selection of restaurants along the streets. We went to the Hotel's "Dim Sum Buffet" which was extremely cheap and they served lots of dumplings and other items but not many people were actually there. The pool is on the fourth floor and looked clean and with nice views of the surrounding area. We stayed two nights and would stay here again as it was value for money for a budget Hotel.More

Show less
Room tip: Higher rooms for a better outlook
See all 1,323 reviews
Payments made by partners impact the order of prices displayed. Room types may vary.
Nearby Hotels 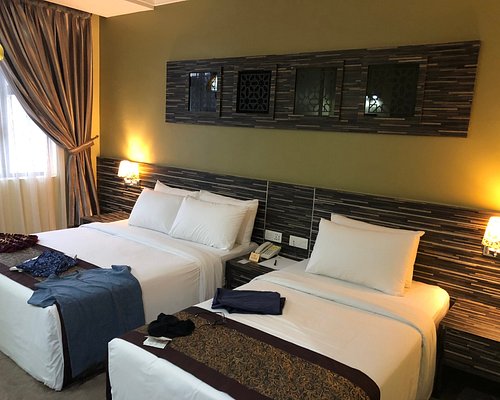 We stayed here for 2 nights in executive hillview.

As previous reviews have said the rooms are dated and there is a very strong musty smell. But the room was spacious and had a nice view and sitting area. We were also given complimentary drinks and there was complimentary snacks and tea in executive lounge. it was a nice treat.

The Breakfast was good and lotts of variety even for vegetarians. Although found the restaurant to be very packed although that could be due to the fact that it was a public holiday weekend. The staff were good at cleaning tables quickly, albeit with a very strong dettol smelling cloth.

The pool was nice and had a good amount of sun loungers.

The location of the hotel was brilliant. It was smack bang in the middle of Kuah town and the duty free shops were just over the road!! We even managed to find some nice veg restaurants. Try cappucinos for pizza or there is an indian restaurant just across the road.

A little bit of a drive to the oriental village and cable cars but the rates for taxis are fixed in Langkawi and there is generally a fixed fee of 100 ringetts for 5 hours. The reception will also be able to tell you rates for taxis.

So really if the decor was updated a bit and that musty smell got rid of this could be a 5 star hotel.

This review is the subjective opinion of a Tripadvisor member and not of TripAdvisor LLC.
shivajimodak
Kuala Lumpur, Wilayah Persekutuan, Malaysia
11
Reviewed 20 September 2012
Furniture, Carpet old & Doctor was not available on call

Rooms are spacious but furniture's, carpet looked old. Although this hotel has been called as **** hotel, but Doctor was not available on call. One of the guest's son was down with high fever and when he approached to the reception, the answer was "please visit hospital" at around 11 PM.

This review is the subjective opinion of a Tripadvisor member and not of TripAdvisor LLC.
Putraskyline
Malaysia
10459
Reviewed 8 September 2012 via mobile
Tired and smelly

Booked this hotel for super peak season, Hari Raya period. Hotel was almost full but early check in was granted. Located on 5th floor, once entered the room it was tired, mould and smelly. Location was good but service are almost non exist. Sauna and gym was the facilities provided but all are broken. This hotel was rated at 4 star but it should be 2 star. Will not come back and better to pay other new hotel if you are in budget. The westin are great if you have budget.

This review is the subjective opinion of a Tripadvisor member and not of TripAdvisor LLC.
Janice3934
Melbourne, Australia
5357
Reviewed 28 August 2012
Beautiful view, beautiful pool

We spent our first week in Langkawi at The Bayview and had a very pleasant stay. We booked an Executive Hillview room but were upgraded to seaview and I'm sure that added to our enjoyment. As other reviewers have said, the hotel is tired but our room was very clean, spacious and comfortable, though you have to expect asian beds to be much firmer than westerners are accustomed to. And this is not the right hotel if you want to be near the beach.
Breakfast was more than adequate - a good selection which varied to some extent daily. It was better than I'd expected after reading some reviews so if you don't expect 5 star you should be happy.
Our stay was during Ramadan so the lounge was closed and there was no alcohol served in the restaurant. However one of the 'executive' perks was that our mini bar contained, in addition to the usual complimentary 2 bottles of water, 2 cans of beer and 4 of soft drink which were replaced daily if we'd used them. We also had free wifi.
The pool was beautiful and just the right temperature - no effort getting in but not so warm it wasn't refreshing. Don't know where everyone else was but at some stage every day we had the entire pool to ourselves. It was busier later in the afternoon but the most I counted there at any time was 17! Plenty of lounges though sometimes it could be problematic finding someone to give you a towel. Also, we found the 7pm closing a little early - would have appreciated it being stretched to 8.
Staff were warm, welcoming and helpul without exception.
Not a lot to do in Kuah - duty free shopping seems mainly to consist of alcohol (spirits are unbelievably cheap), chocolate, perfume and cigarettes. Plenty of cheap trinkets at the nearby markets and there are a few small (by western standards) malls. We particularly enjoyed the Water Gardens hawker market where you can eat like the locals - head left as you leave the hotel for a block or 2 - open from approx 4pm but, unlike the other markets, finishes around 7. And we had some delicious food at the Rootian Seafood Restaurant which is on the corner at the front of the market.
We booked a snorkelling trip through the hotel which was something to do for a day but we felt like cattle it was so crowded when we got there and the fish and coral fell well short of amazing. Perhaps, being Aussies, we're spoilt in this department.
Our only real criticism was not really the hotel's fault. A noisy family moved into the next room which had an interconnecting door. They stayed up late apparently watching and cheering the Olympics. After the second night I slipped a note under their door explaining that they were disturbing others and that problem was solved. However, at the same time (and I have no way of knowing if it was the same people) our room became regularly filled with smoke despite us being on a non smoking floor. It was coming through the air conditioning system and was incredibly intrusive. We let reception know but, to our knowlege, nothing was done - certainly nothing changed - and when we unpacked at our next hotel our clothes still reeked of smoke. I appreciate this is an awkward one for management but perhaps even a card in non smoking rooms reminding guests of the fact and letting them know how it affects others might help.

Your comments and suggestions are highly appreciated. Please be assured that corrective measures are being looked into to ensure our guests' comforts. We look forward to welcoming you at the Bayview Hotel Langkawi again in the near future.

Report response as inappropriateThank you. We appreciate your input.
This response is the subjective opinion of the management representative and not of TripAdvisor LLC
RobertC56
Brunei
6822
Reviewed 25 August 2012
Location ok

The Bayview hotel is a nice hotel but does need updating. For some reason when we checked in we were upgraded to an executive room which was big and plenty of light, the outlook was of the pool and the ocean.
The carpet needs replacing as does the upholstery on the furniture as its beginning to fray.
I found the breakfast very limiting, mainly Asian food with a smattering of western food I would like to see a better balance. The waiting staff were quite attentive and delt well with the diners who needed help.
The front of house staff were always eager to help.
My children loved the pool on the odd days we were not out and about, found it strange that the pool was only open until 7 pm though. The gym was disappointing there was only four dumbells which consisted of one heavy set and one light set and the machines and the machines need servicing .There was no disinfectant spray or clothes to wipe down any machines that had been sweated on, no cold water or towels for guest to use.

This review is the subjective opinion of a Tripadvisor member and not of TripAdvisor LLC.
View more reviews
PreviousNext
1…159160161…