First trip to Phuket - Review of Beyond Resort Karon

USD 57
View deal
Hotels.comUSD 222
PricelineUSD 199
eDreamsUSD 200
View all 14 deals
Prices are provided by our partners, and reflect total costs of the stay, including all taxes and fees known to our partners. Please see our partners for more details.
Payments made by partners impact the order of prices displayed. Room types may vary.
Alan T
Melbourne, Australia
3225

We stayed at this hotel for 8 nights. I picked this hotel from the information supplied on the net. It appears to be the only hotel on the beach. It has magnificent views of the sea and surrounds. The room is comfy with great air conditiong, doonas on the bed was a surprise. We had 2 single beds on arrival, make sure when booking you order double (king) or singles, they swapped beds for us. Staff are very friendly and helpful. Buffet brekky was great. No AC in hotel except for room. Pool great, bar service avaiable in pool, can charge your room. Stayed from 25-10 -2-11, little rain,high season starts 1-11 room tariffs dearer from now. Exchange money in Phuket better ezchange than Aus. Its closer to Kata than Patong but 200 baht ($7) Tuk Tuk fare toPatong or 30 min Walk.More 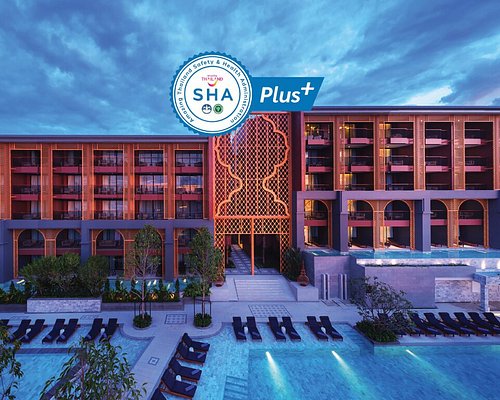 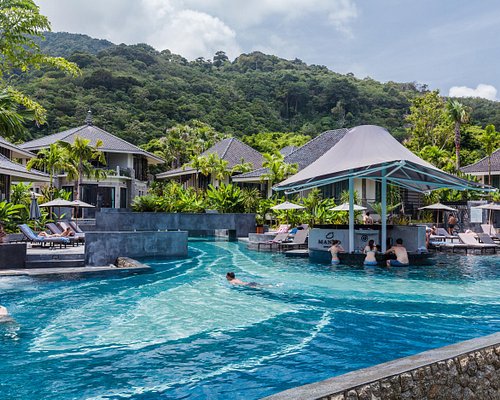 My wife and I stayed here in May 2012, as part our anniversary holiday. Overall the hotel was nice and the service was good.

The rooms were fine, but nothing special. They were spacious, as with most hotels in Thailand, but the one that we had did look a little tired and dated. That said, it was clean and we were only there for 3 nights so was fine.

We only ate at the restaurant beside the pool which was very nice. The bar is quite cool also, especially when it rains and they pull down the blinds as you sit at the bar.

The beach at the hotel was great, however beware of the rip currents in the sea - they are deadly! On our first day at the beach (and of our holiday in fact), some poor guy had to be pulled out of the sea and taken to hospital, which was not a pretty sight. He was ok in the end. As all the locals told us, don't try to swim against the tide (ie back into shore), but rather swim with it (ie parallel to the shore) and eventually you will get back in. Sounds strange but that's what we were advised - I didn't test the theory out!

From this hotel we took a day trip to Phi Phi island which was amazing. Great place to chill for a few hours. Everybody told us that it was overrun with Aussi tourists drinking fosters but that was a load of old rubbish... at least the day that we went - it was empty! In May the speedboat was very bumpy, but it is definitely worth a visit.

Overall I did not really warm to Phuket as a location. The area around the hotel was fine, but I think that was one of the better areas. We drove through Patong on the way to the hotel and it looks like a complete dump - glad we didn't have to stop. If we had of been staying anywhere near it, I would have taken the next plane out...

So, all in all, a good hotel with good service on a nice beach; good value for money.

Room tip: I would prefer not to be on the ground floor as they open out quite close to the pool; some folks like this though.
Ask pdmurphy about Beyond Resort Karon
2  Thank pdmurphy

This review is the subjective opinion of a Tripadvisor member and not of TripAdvisor LLC.
Sinem I
Melbourne, Australia
31
Reviewed 6 November 2012
Amazing!!

We stayed at this resort for 5 nights. The service was great, the staff were all very friendly and the rooms were more than expected overlooking both pools and beach. We highly recommend this resort as there is everything you can want to make your stay enjoyable. Right outside the resort on the beach is a message place with the friendliest staff. The pool bar is resonably priced with great cocktails. The restaurant offers cooking classes which was fun. Rooms were very clean and made up with fresh towels, sheets and bathroom accessories daily. The location was perfect, right on the beach and right outside many shops and restaurants.

Ask Sinem I about Beyond Resort Karon
1  Thank Sinem I

This review is the subjective opinion of a Tripadvisor member and not of TripAdvisor LLC.
Wrighty690
21
Reviewed 1 November 2012
Great stay

We stayed in karon beach resort this September just gone. I was worried what the weather was going to be like with it being rainy season but we did particularly well. We had a couple if days of rain and a couple of afternoons but we had red hot days too which meant we could do trips.

The hotel is very nice. Very clean throughout. The maid service is excellent. One phone call and within minutes a knock at the door would bring fresh bath or pool towels. We once forgot and left the do not disturb sign on the door by mistake and went out for the day. We returned later that night and whilst we had dinner about 9pm the maids went in and cleaned for us. Without asking.

The food was very nice. Breakfast was different for about 7 days then rotated around again which wasn't too bad and expected really. Nice pancakes and omelettes at your say and fresh fruit etc. we only ate several times in the hotel for dinner and evening meal of which was again nice albeit a bit dear. We mainly walked out into karon where you could eat for two of you starter and main with drinks for about £23. Plenty of it too.

Karon resort is excellent. You can do a bit of shopping and plenty of restaurants to explore. Being the time of season it was a bit quiet but can imagine it would be lively at the peak. The town is right outside the front entrance to karon beach. Ideal.

Excellent holiday in all with great trips to phi phi and James Bond island.

The only down side to this hotel were the reception staff. They weren't particularly friendly. They almost without actually saying it accused me of trying to take items from the mini bar without trying to pay for them.
One day we had a problem where one of the day trip companies didn't pick us up (misunderstanding and was sorted) however I used the reception phone to ring the company I was on for about 3 minutes yet the reception staff charged me 20 baht. Really ! Surely it would have just been good customer service????

About 1 hour from airport

This review is the subjective opinion of a Tripadvisor member and not of TripAdvisor LLC.
OzVikingGC
Gold Coast, Australia
3632
Reviewed 28 October 2012
Location, location, location!!!

We stayed 5 nights at the Karon Beach Resort & Spa and loved it! My sister stayed there a couple of years ago and hightly recommended it and I'm so glad that we took her advice.
You simply can't fault the location of this hotel, right on the beach and every room has ocean views... magic! We were so grateful that we stayed in Karon which is much quieter than Patong but still had lots of great little shops and restaurants to choose from.
The rooms were lovely, maybe a little dated but we found them to be pleasant and roomy. The bed was a bit on the hard side but we still slept well. The buffet breakfast was very nice, they had a great selection and cooked bacon and egg to order.
Unfortunately, they don't have free Wi-Fi in the rooms but they do give you 10 mins if you don't require your bed linen to be changed.
The staff were friendly and helpful, we had a medical emergency on the last night and the staff came running and stayed until the ambulance arrived.
We will definitely be back and next time we'll stay longer!

This review is the subjective opinion of a Tripadvisor member and not of TripAdvisor LLC.
Gilby_melbourne
Sunbury, Australia
1736
Reviewed 21 October 2012
Terrific stay once again

Just got back from out 2nd stay at Karon Beach Resort and Spa. Once again the staff were terrific, Come, Kid, Chai, Ling Ling and everyone else were so friendly and always willing to help us out. Couldn't ask for anything more for the breakfast buffet. Everything you wanted. Best spot to stay when in Phuket, away from the hassle and bustle of Patong yet only a short drive if you want to go.Direct access to the beach. Even the security guys helped us out when we had to get our rental car out of the car park, stopping all the traffic to let us out. Can't wait to comeback next year...

This review is the subjective opinion of a Tripadvisor member and not of TripAdvisor LLC.
View more reviews
PreviousNext
1…158159160…