Expedia.comUSD 208
Hotels.comUSD 208
travelup.com
View all 18 deals
Prices are provided by our partners, and reflect total costs of the stay, including all taxes and fees known to our partners. Please see our partners for more details.
Payments made by partners impact the order of prices displayed. Room types may vary.
eugenelacey
1

Desperately needs a makeover. Fantastic historical Château - but really wasted on this drab, gloomy hotel. Staff are disinterested, don’t engage or smile much - and the sommelier in particular needs to up his game massively.

Review collected in partnership with this hotel
This business uses tools provided by Tripadvisor (or one of its official Review Collection Partners) to encourage and collect guest reviews, including this one.
See all 909 reviews
Payments made by partners impact the order of prices displayed. Room types may vary.
Nearby Hotels 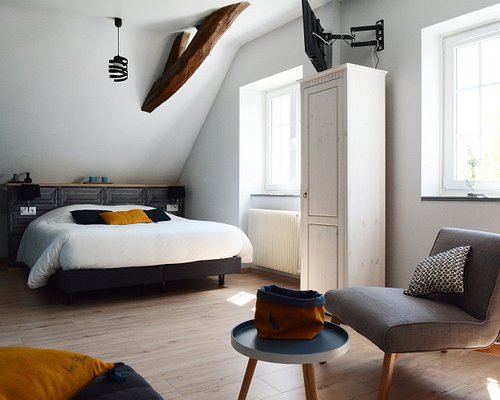 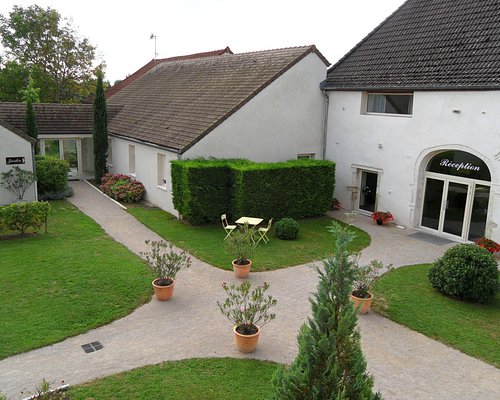 I stayed in this hotel from October 1st to 4th. If you had stayed before in a chateau, you better downgrade your expectations. it is a different style of decor, you do not feel in a real chateau. bedrooms are fine but a bit overrated for a 5 stars hotel, it is more likely a 4 star. In the middle of a second wave of Covid breakfast is served as a buffet, everybody touches everything. There are some gloves there but of course either people do not use or use it inappropriately. I asked to talk to someone about the protocols that n Covid nobody ever replied to me which means nobody cares. I was planning to stay at another hotel of this network Chateau Artigny in the Loire but do not know if it is a good idea anymore, unfortunately. I had dinner one night at the hotel, October 1st, and the restaurant is quite good and the staff at the restaurant quite nice.

Thank you for kindly taking the time to leave us a comment about your stay in our etablishement.

Regarding your comments, we want you to know that every returns from our guest matters and we are trully sorry to learn that your experience with us did not meet your expectation.

We are sorry to learn that your stay in our etablishement has been marred by the fear about the protocol etablished against the COVID-19 pandemic in our hotel. To respond to current sanitary measures, we put up a straight protocol (mandatory face-mask since our reopening in common area, hydroalcoholoc gel terminal for all of our guests, full disinfections of our room, common toilet and lift disinfection each hour., stand-up service forbidden...) This protocol is set up in all the common areas of our etablishement and according to governemental measures.

Concerning the breakfast area, indeed, we set up a sanitary protocol that allows us to serve the breakfast as a buffet : mandatory face-mask when you move along to the buffet, gel hydroalcoholic terminal and gloves to prevent any direct contact with the cutleries.

It seems obvious for us that every clients must show goodwill and respect to each other.

However, an individual room service breakfast was possible in order to avoid any risk of contamination.

Our etablishement is controled by MERIEUX labs for the hygiene and sanitary protocol.

Our Manager was at your disposal to exchange with you about these differents measures. It is regretable that no oral exchange was possible to be made to allay your fears.

Concerning the room decor, all of our rooms have their own decoration and we want to keep this Chateau ambiance. That ‘s why it would have been easier to ask to our reception service to show you another room to suits you.

Moreover, we are really pleased that you seems to enjoyed your dinner and their service in our restaurant.

We stay naturraly at your disposal for any exchange and we hope that, in the future, you will trust in our hotel and our groupe again for a next stay in France,

Report response as inappropriateThank you. We appreciate your input.
This response is the subjective opinion of the management representative and not of TripAdvisor LLC
natalispain
Geneva, Switzerland
1
Reviewed 24 September 2020
Week-end en couple

Very beautiful hotel located in the middle age castle, impressive surroundings, beautiful cafe with an outside terrace. The room decoration is a bit outdated for a 5-star but it has its own charm. We would have appreciated the hotel to offer vineyard excursions.

Review collected in partnership with this hotel
This business uses tools provided by Tripadvisor (or one of its official Review Collection Partners) to encourage and collect guest reviews, including this one.
Ask natalispain about Chateau de Gilly
Thank natalispain

Thank you for your kind comment concerning your stay at Château de Gilly and we are very happy to learn that you enjoyed you stay with us.

Concerning vineyard excursions, we can recommand you some on request at the reception. We work with a partner to organize a tour for a day in the vineyard or to go on your own with some recommandations.

We will be very happy to welcome you again in our etablishement for your next stay in Burgundy.

Have a lovely day,

Report response as inappropriateThank you. We appreciate your input.
This response is the subjective opinion of the management representative and not of TripAdvisor LLC
12APlace
Edinburgh, United Kingdom
18297
Reviewed 20 August 2020
So many problems, so few solutions

This is an expensive hotel. One should reasonably expect service to match. You go in. There is a basin, and a sign offering you a cool rehydrating drink of water. There are no bottles. From the lift, you are led up 19 stairs to an attic room. It is stiflingly hot. There is an industrial radiator, which blows out cooler air. At the back of it is a six-inch diameter plastic corrugated pipe. it is unattached to anything. Out of it comes the hot air which the front of it is cooling. There is also a portable fan. it does not work. Neither does the fridge. We ring reception to tell them. They apologise. It will be fixed. We go to the swimming pool to cool off. The regulator for the water in the shower does not work. The soap dispenser is empty. When we get back to our room, nothing has happened. We phone again. The lady at reception has been too busy. They are short staffed. She says she will come up at once. After half an hour, we go down. She is still too busy. I ask to see the manager. (I don't think, in fifty years of travelling, I have ever done that.) He comes and apologises. They are short staffed (and this in the middle of Covid unemployment!). Another portable fan is found, which helps. We go down to dinner. I had downloaded the menu and the wine list, and we had chosen from it. The wines were expensive, and I had taken care in the choice of both the red and the white. We ordered them. The waiter returned shortly afterwards. Each of our choices was unavailable. I had made the choice from their published list only two days before. He suggested an alternative white, which was comparable, and a more expensive red. I assumed that the hotel would bear the difference in price, but when we came to pay the bill, no - it was the full, more expensive, price. The manager had said that he would make a reduction in our bill as part compensation for our problems. The reduction turned out to be the price of the bottle of white plus free breakfasts. I said that breakfasts were included in our pre-paid rate. They disputed that. I got our paperwork. Breakfast was included in the pre-paid rate. In spite of accepting that, no further corresponding reduction was made. We left with the sourest of tastes in our mouths for the shoddiness of the whole set-up - the accommodation, the facilities, the wholesale failures to try speedily and fairly to remedy problems, and the, to my mind disgraceful, way in which the 'compensation' was mismanaged. The hotel is part of the 'grandes etapes' chain in the area. We shall avoid them like the plague in future. I have been writing reports on hotels for tripadvisor for years. I have never before given a one-star rating, far less giving such a rating to an establishment which holds itself out to be of luxury class.

I do feel sorry that you haven't enjoyed your stay at Le Château de Gilly. We have taken good note of your remarks and have shared them with the different departments concerned in order to avoid making the same mistakes.

We hope that you have at least enjoyed the region.
Best regards,

Report response as inappropriateThank you. We appreciate your input.
This response is the subjective opinion of the management representative and not of TripAdvisor LLC
KayM1925
The Hague, The Netherlands
207
Reviewed 19 August 2020 via mobile
Lovely grounds!

We have a lovely room and enjoyed the time! We arrived late and their restaurant was booked full but they were able to offer a meat and cheese plate for us in the bar. Breakfast is generous but a tip is to plan ahead for meals!. A lovely walk around the chateau - The is a pool also tucked behind the hedge!! Gorgeous views.

This "five star" hotel/chateau is in a very bad shape and must be urgently renovated! The rooms in the hotel do not even have air conditioning or ventilation - which makes it very hard to sleep there during warm summer nights. The window in our room was dirty and full of bird poop. The lawn and the pool area looked really shabby too.
We were so disappointed with this chateau that we had to leave it just after two days.

Staff was nice and helpful though. The breakfast was also good. However, considering the high price level, this hotel ought to be avoided until it will be renovated.

We have taken good note of your remarks and have shared them with the headquarters. We hope that you have enjoyed your stay at Chateau de Gilly and you have appreciated the effort of the staff.

Report response as inappropriateThank you. We appreciate your input.
This response is the subjective opinion of the management representative and not of TripAdvisor LLC
View more reviews
PreviousNext
12…