USD 63
View deal
PricelineUSD 82
Expedia.comUSD 72
eDreamsUSD 82
View all 15 deals
Prices are provided by our partners, and reflect total costs of the stay, including all taxes and fees known to our partners. Please see our partners for more details.
Payments made by partners impact the order of prices displayed. Room types may vary.
graham c
Orihuela Costa, Spain
8831

Stayed here for about 5 days and had a wonderful time...I was due to get there at approximately 11-30pm however my transfer got me there nearer 1am...The reception was still open though normally closed at 11pm, so they're really accommodating...Special mention to Eric, Juan, Jonathon who looked after me at the bar and Anna on reception...Muchas Gracias...

See all 230 reviews
Payments made by partners impact the order of prices displayed. Room types may vary.
Nearby Hotels 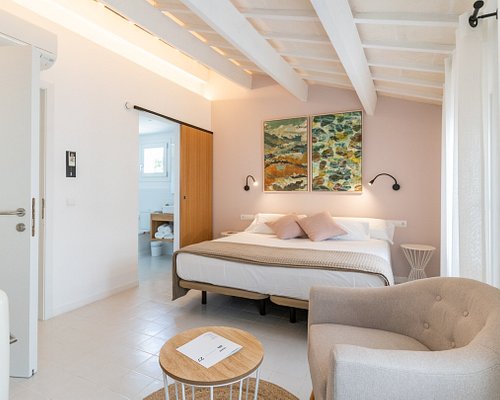 Just returned home and would like to give my opinion , anyone wishing to stay here please do the rooms are small but very clean and tidy , the hotel is quite small but adequate it has a lovely restaurant and the menus good , great bar area with nice outside seating , small garden area to relax on sun beds and a small pool and jaquzzi which is spotless , the staff are helpful and we're very pleasant , recommended !

This review is the subjective opinion of a TripAdvisor member and not of TripAdvisor LLC
alasdair255
Menorca, Spain
188
Reviewed 7 November 2018 via mobile
Hardworking staff overshadowed by rude , aggressive owner

I’m not a complainer by nature and would rather not review at all if I can’t be positive . My wife and I have been going to Menorca for nearly 25 years . We love the island and it’s people and consider many local bar and restaurant owners friends .
We stayed a night last week at the hotel in extraordinary circumstances,with much of the island having been hit with a powercut lasting days . The hotel bar and restaurant had the benefit of emergency generators unlike many other restaurants in mercadal that night and was extra busy and we’d have forgiven all manner of issues with service . The restaurant staff were pleasant and rushed off their feet . My wife and kids main courses arrived 15 minutes before mine . Not something I would dream of complaining about given the pressure the staff - and indeed kitchen staff were under . I had ordered the shoulder of lamb - as had the Englishman on the table next to us, and mine arrived when his did . The lamb looked lovely , however it was cold having not been reheated adequately. Nor was that of the chap on the next table . Apart from the fact that this dish needs to be steaming hot and melt in the mouth ,and being cold was fibrous and unpleasant , it just wasn’t safe to eat . I left most of mine but wasn’t surprised that the chap next door didn’t feel like he should be paying for his and had politely complained , at which point the bill generator ,who I took to be the owner as he’d referred to the dish being his grandmother’s recipe , became absolutely unacceptably rude and offensive , point blank refused to do anything for the chap and his bill or indeed offer any kind of alternative other than to pay the full amount . He clearly had a very good command of English but wasn’t interested in listening . I was asked by the chap on the next table to recount the fact my own lamb was cold and I got a mouthful as well so when I got my bill I just paid up and resolved to write this review . We won’t be back . Shame as the staff there were clearly embarrassed by his behaviour and had all been lovely . He must have made excellent money that night , with full occupancy in hotel and restaurant. I’m prepared to accept he may have been under stress but I’ve never experienced such unpleasant customer service .
On a positive note the hotel family room B&B not badly priced, was quite narrow but was nicely appointed and clean , breakfast was decent and the swimming pool area had sauna and jacuzzi and was covered . Had the man next to us and me ordered steak our experiences and this review might have been entirely different!

This review is the subjective opinion of a TripAdvisor member and not of TripAdvisor LLC
kathrynm512
Sutton Coldfield, United Kingdom
91
Reviewed 7 November 2018
Rudest hotelier ever encountered

We arrived for one night only in the middle of a power cut in one of the worst storms in 30 years. Hotel Jeni was on a generator. We were glad to have a room. It was basic but clean. We went downstairs for a meal and ordered a leg of lamb. When it came it was cold in the middle by the bone. We sent it back but didn't want anything else as this took so long to arrive. When we came to pay the cost of the lamb was still on the bill. We took it to the manager to complain whereupon he went mad and shouted at us In a very intimidating way in front of everyone in the restaurant and made us pay or he would call the police. Basil Fawlty reincarnated! Would never go back or be treated like that ever again. Do not go to this hotel.

One of the worst hôtel I've slept ! The wattress was hard and painfull, you can clearly feel the springs on your back. Very bad night fo me and my friend. There was a hole on the tower and the size of the shampoo was ridiculous.
Furthermore the hotel is very noisy.

This review is the subjective opinion of a TripAdvisor member and not of TripAdvisor LLC
andrea h
London, United Kingdom
55
Reviewed 6 July 2018 via mobile
Little gem

Stayed here end of June for a week what a gem of a place. Reception staff couldn't help enough. Very friendly place. Bar staff and waiters terrific. Spotless place to stay. Rooms cleaned every day. Would certainly recommend and I would stay again.