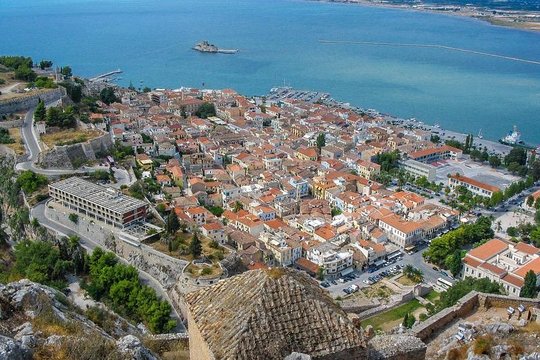 This product is unavailable to book via TripAdvisor. Contact the supplier for availability.
From
USD 389.16
Free Cancellation up to 24 hours in advance
Low Price Guarantee
No Booking Fees
Overview
Unique Transfers and Tours offers you luxury vehicles, limo minivans, minibus.
Upgrade your transfers by choosing vip transportation services around the city & private tours.
What to Expect
Itinerary
This is a typical itinerary for this product

Nafplio is a seaport town in the Peloponnese in Greece that has expanded up the hillsides near the north end of the Argolic Gulf. The town was an important seaport held under a succession of royal houses in the Middle Ages as part of the lordship of Argos and Nauplia, held initially by the de la Roche following the Fourth Crusade before coming under the Republic of Venice and, lastly, the Ottoman Empire. The town was the capital of the First Hellenic Republic and of the Kingdom of Greece, from the start of the Greek Revolution in 1821 until 1834. Nafplio is now the capital of the regional unit of Argolis.

Mycines , known before 1916 as Charvati is a village and a former municipality in Argolis, Peloponnese, Greece. Since the 2011 local government reform it is part of the municipality Argos-Mykines, of which it is a municipal unit.[The municipal unit has an area of 159.033 km2. It is located 1 km west of the ancient site of Mycenae and 2 km east of the highway linking Argos and Corinth. It is 9 km north of Argos.

Epidaurus was a small city in ancient Greece, on the Argolid Peninsula at the Saronic Gulf. Two modern towns bear the name Epidavros:Palaia Epidavros and Nea Epidavros. Since 2010 they belong to the new municipality of Epidaurus, part of the regional unit of Argolis. The seat of the municipality is the town Lygourio.
Show More
Important Information
Departure Point
Traveler pickup is offered
Please contact with us for our meeting point.
Duration
1h
Inclusions
Show More
Additional Info
Cancellation Policy
For a full refund, cancel at least 24 hours in advance of the start date of the experience.