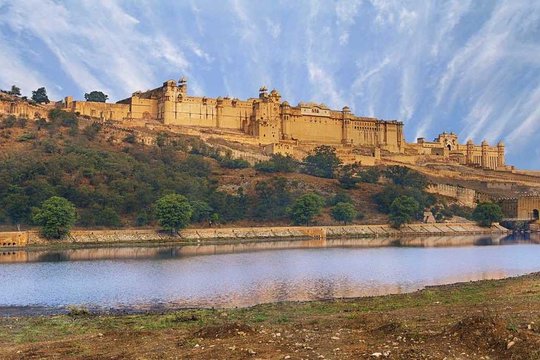 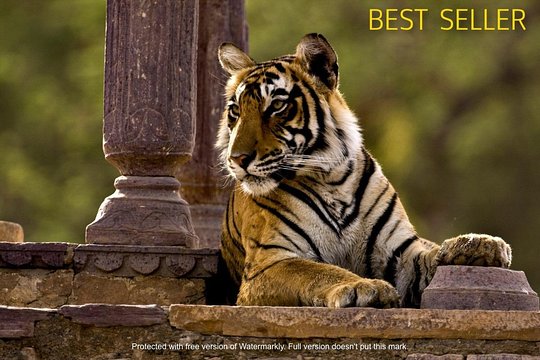 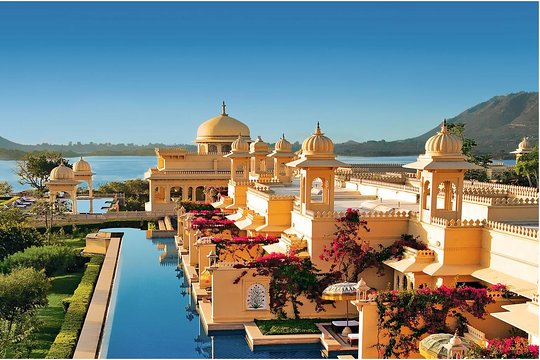 Stop At: Amber Fort Palace, Jaipur 302021 India
Amer Fort is a fort located in Amer, Rajasthan, India. Amer is a town with an area of 4 square kilometres located 11 kilometres from Jaipur, the capital of Rajasthan. Located high on a hill, it is the principal tourist attraction in Jaipur.
Duration: 1 hour 30 minutes

Pass By: Jal Mahal, Amer Road, Jaipur 302002 India
Jal Mahal is a palace in the middle of the Man Sagar Lake in Jaipur city, the capital of the state of Rajasthan, India. The palace and the lake around it were renovated and enlarged in the 18th century by Maharaja Jai Singh II of Amber.

Stop At: City Palace of Jaipur, Tripolia Bazar Near Jantar Mantar, Jaipur 3023002 India
The City Palace, Jaipur was established at the same time as the city of Jaipur, by Maharaja Sawai Jai Singh II, who moved his court to Jaipur from Amber, in 1727.
Duration: 40 minutes

Stop At: Jantar Mantar - Jaipur, Tripoliya Bazaar near entrance to City Palace, Jaipur 302020 India
The Jantar Mantar is a collection of nineteen architectural astronomical instruments built by the Kachwaha Rajput king Sawai Jai Singh II, the founder of Jaipur, Rajasthan. The monument was completed in 1734. It features the world's largest stone sundial, and is a UNESCO World Heritage site.
Duration: 40 minutes

Stop At: Hawa Mahal - Palace of Wind, Hawa Mahal Tripolia Bazaar Road Badi Choupad, J.D.A. Market, Pink City, Jaipur 302002 India
Hawa Mahal is a palace in Jaipur, India. Made with the red and pink sandstone, the palace sits on the edge of the City Palace, Jaipur, and extends to the Zenana, or women's chambers. The structure was built in 1799 by Maharaja Sawai Pratap Singh, the grandson of Maharaja Sawai Jai Singh, who was the founder of Jaipur.
Duration: 15 minutes

Stop At: Ranthambore National Park, Vigyan Nagar, Ranthambore Road Prempura, Sawai Madhopur 322001 India
Ranthambore National Park is a vast wildlife reserve near the town of Sawai Madhopur in Rajasthan, northern India. It is a former royal hunting ground and home to tigers, leopards and marsh crocodiles. Its landmarks include the imposing 10th-century Ranthambore Fort, on a hilltop, and the Ganesh Mandir temple. Also in the park, Padam Talao Lake is known for its abundance of water lilies.
Duration: 3 hours

Stop At: City Palace of Udaipur, Jagdish Temple Rd City Palace Complex, Udaipur 313001 India
City Palace, Udaipur is a palace complex situated in the city of Udaipur in the Indian state of Rajasthan. It was built over a period of nearly 400 years, with contributions from several rulers of the Mewar dynasty.
Duration: 1 hour 30 minutes

Stop At: Jagdish Temple, RJ State Highway 50, Udaipur 313001 India
Jagdish Temple is a large Hindu temple in the middle of Udaipur in Rajasthan, just outside the royal palace. It has been in continuous worship since 1651. A big tourist attraction, the temple was originally called the temple of Jagannath Rai but is now called Jagdish-ji. It is a major monument in Udaipur.
Duration: 30 minutes

Stop At: Sahelion Ki Bari, On the banks of Fateh Sagar Lake, Udaipur 313001 India
Saheliyon-ki-Bari is a major garden and a popular tourist space in Udaipur in Indian state of Rajasthan. It lies in northern part of the city and has fountains and kiosks, a lotus pool and marble elephants. It was built by Rana Sangram Singh. There is also a small museum here.
Duration: 30 minutes

Stop At: Lake Pichola, Udaipur India
Lake Pichola, situated in Udaipur city in the Indian state of Rajasthan, is an artificial fresh water lake, created in the year 1362 AD, named after the nearby Picholi village. It is one of the several contiguous lakes, and developed over the last few centuries in and around the famous Udaipur city.
Duration: 30 minutes

Tommy115523
10
Excellent Tour
Amazing Tour so far we had in India, everything was well planned and smooth. Pick up was prompt and plan was।…
Read more

Ramsy33
10
Amazing Tour
We had a great time on this tour. Pick up was on time and excellent arrangements were done . Vehicle, driver and…
Read more

434arvindb
162
Best experience from a Tour company.
From the outset Unseen India was extremely responsive. Booking a trip from the U.S is always scary not knowing how…
Read more

slpneal
Concord, California
94
Long Day
This was the perfect way to get from one point to another, but it was a really long day! Great guide and great…
Read more

Hamza221133
10
Most beautiful day tour
It was a beautiful day as our long dream was coming true.We were picked up on time in a very comfortable car by…
Read more

brynmorew
Phnom Penh, Cambodia
154
Bharat is the Best
This is a big day out & an incredible day that will stay with me forever. Bharat is warm, charming and helpful.…
Read more

Pankytwot
20
Truly a combo tour
If u want to enjoy a hassle free experience than this tour is for you. We booked all including tour which had Pick…
Read more

Dong113353
10
Excellent and beyond best
Wonderful services offered by Unseen India ! We were picked on time and our guide Mr Khan showed us the sites…
Read more

jaffeed
New York City, New York
20
Totally deserving their certificate of excellence!!!
Mr. Bharat arranged everything perfectly! My college age daughter was in Jaipur for a semester abroad and we…
Read more

Taryut11
10
Memorable Day Trip
It was an excellent trip to Agra from Jaipur. Our Driver was amazing and courteous and also a wonderful person. …
Read more

Tribes213
10
Trip to Agra
Our trip to Agra was amazing. We booked them online and got included entry, lunch and car and driver with awesome…
Read more