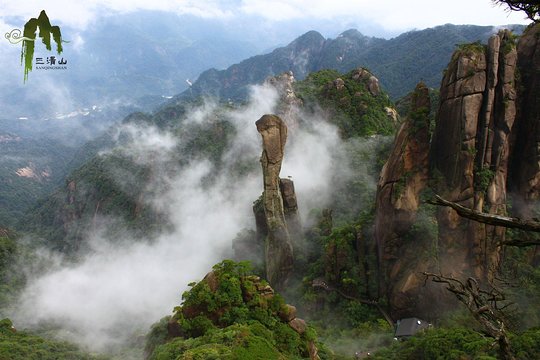 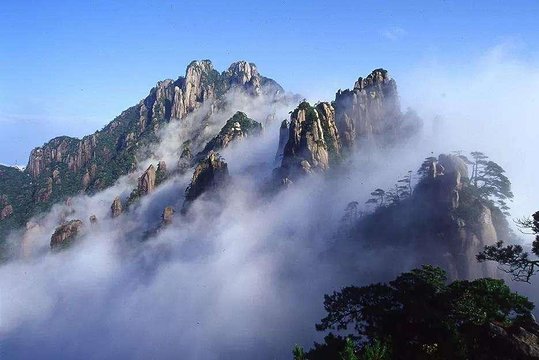 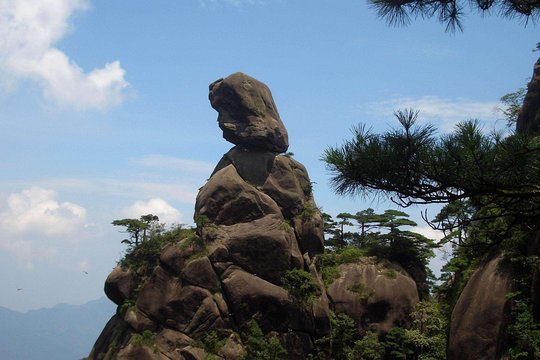 Stop At: San Qing Shan, Junction of Yushan County and Dexing County, Shangrao 334000 China
Pick up is included and so does the train tickets. The scenic area covers 229.5 square kilometers. Yujing Peak, with an elevation of 1819.9 meters, which is the highest peak in Mt. Sanqingshan. There are a thousand peaks competing in their beauty, ten thousand streams pouring into pools, ancient trees growing thick with rare birds and animals flying and creeping among them. Mt. Sangqingshan, wrapped by cloud and fog all the year around, like a fairy land, was named "the world's most beautiful mountains". It is also a famous Taoist mountain, with more than 1600 years history. Sanqing Blessed Land, with an average elevation of 1530 meters, is a place of assembly for cultural heritage and an “open-air museum” of ancient Taoist architecture. It collects the cream of the cultural relics and Taoist architecture of Mt. Sanqingshan. There are more than 230 ancient buildings and heritage, such as temples, palaces, mansions, lanes, springs, pools, bridges, tombs, terraces, towers and so on, which is a good place to research the Taoist ancient architectural design in China, known as the " open-air museum of China ancient Taoist architecture". It is now a national cultural relics protection unit.
Duration: 1 day

Meals included:
• Lunch
• Dinner
Accommodation included: Overnight at Rishang hotel 3-star up on the mounatain or Hillton at the foot of San Qing Shan

Stop At: San Qing Shan, Junction of Yushan County and Dexing County, Shangrao 334000 China
Today, you may watch the sunrise if the weather is nice, after breakfast, you will go hiking to see the highlights of Sanqing Shan, like the Eest Lake Peak, Ju Mang Chu Shan, ans so on. Train tickets is inculed back to Hangzhou.
Duration: 5 hours

AiLee
10
Best Tour Guide in China
We had a wonderful day with Forrest as our guide and driver. He is a very nice and punctually guide. I am very…
Read more

Sara D
20
Great tour of Hangzhou Tea Culture
We had a great tour of local tea culture and history with Forrest. Forrest was punctual and very professional. We…
Read more

reb72018
Boston, Massachusetts
20
Best tour guide ever!
Hangzhou Travel Agency is the best -- we could not have asked for a better tour guide! They were extremely helpful…
Read more

Linda M
Redlands, California
2012
A Wonderful Day!
We had a wonderful day with Forrest as our guide and driver. The Tea Museum was fascinating and the lunch at Green…
Read more

Martysfo
San Rafael, California
24192
A Unique and Magnificent fdShow
Hangzhou was the totally under the radar stop in our tour of China. This show, done on top of West Lake is over…
Read more

D9957OUdougs
11
Would not recommend this travel agency.
The only thing about this experience that resembled the description was the show on the lake. A driver arrived on…
Read more

AndrewB2001
10
Hangzhou Trip
Forrest was very kind and helpful for my stay in Hangzhou, he took me everywhere I needed to go for my transition…
Read more