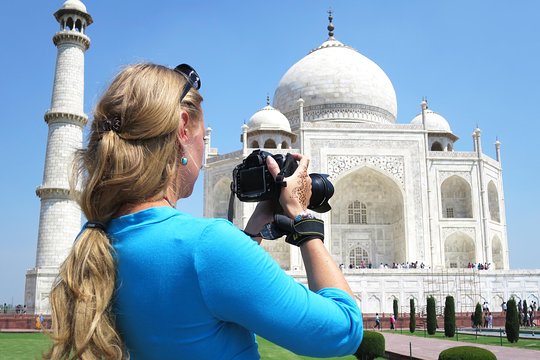 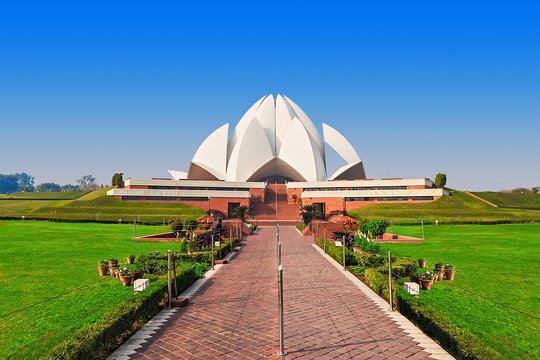 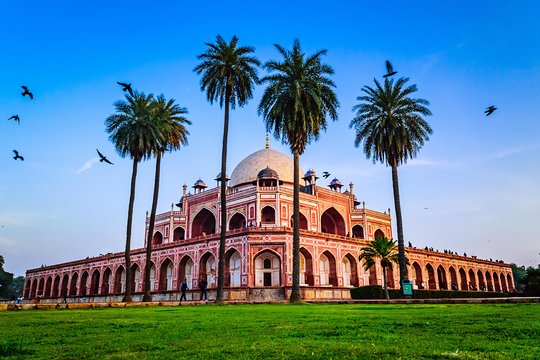 This product is unavailable to book via Tripadvisor. Contact the supplier for availability.
From
USD 136.28
Free Cancellation up to 24 hours in advance
Low Price GuaranteeNo Booking Fees
Overview
Visit India and follow the famous Golden Triangle. Enjoy the perfect introduction to India's three most popular destinations - Delhi, Agra and Jaipur - as we explore the icons and discover the secrets of this fascinating region.
What to Expect
Itinerary

This fort is 600 years old and is constructed with marble and red sandstone.
Duration: 1 hour

Stop At: City Palace of Jaipur, Tripolia Bazar Near Jantar Mantar, Jaipur 3023002 India
Explore the beautifully patterned gardens and architecture of the building located at the center of Jaipur city.

It was initially the seat of the Maharaja of Jaipur but now its some part is reserved for museum.
Duration: 1 hour

Constructed in 1799, it is made beautifully with red and pink sandstone and sits at the edge of the city Place.
Duration: 1 hour

Stop At: Jal Mahal, Amer Road, Jaipur 302002 India
It is situated in the middle of the Man Sagar Lake built in Rajput style architecture.

It is a 17th century architectural beauty and the best spot for peace lovers.
Duration: 30 minutes

Day 2: Agra- The City of the Wonder of the World

Stop At: Fatehpur Sikri India
It is a 16th century Mughal architecture made up of red sandstone.

It is also known as the 'Ghost Town'.

It is considered as the city of victory after Akbar's victory of Gujarat Campaign.
Duration: 1 hour

Stop At: Agra Fort Rakabgani, Agra 282003 India
This is a UNESCO World Heritage Site, constructed in the 17th century.

This pavilion is a perfect blend of Indian and Islamic art and architecture.
Duration: 1 hour

Stop At: Taj Mahal, Dharmapuri, Forest Colony, Tajganj, Agra 282001 India
Explore the beauty of iconic marble mausoleum of Taj Mahal. Get your photos clicked at the best possible spots with the help of your guide.

Taj Mahal is one of the seven Wonders of the World and also a renowned UNESCO World Heritage Site. It is a stunning beauty of 17th century.
Duration: 3 hours

Stop At: Tomb of Itimad-ud-Daulah, Yamuna River, Agra 282001 India
The Tomb of I'timād-ud-Daulah is often described as the Jewel box.

It is considered as the draft of Taj Mahal.

Built between 1622 and 1628, it is surrounded by beautiful structures and gardens.
Duration: 1 hour

Day 4: The Capital of India - Delhi

Stop At: Gandhi Smriti, 5 Tees January Marg Birla House, New Delhi 110011 India
This place marks an area where Gandhi spent most of his life and also where he was assassinated.

It was the house of one of the biggest Business Tycoons of India 'Birla Family' however later on as a remembrance of Gandhi it was bought by the government.
Duration: 1 hour

It is the first Garden Tomb of India.

The sole purpose of Humayun's wife was to build this tomb after his death.
Duration: 1 hour

Stop At: Qutub Minar, Qutb Minar, Mehrauli, New Delhi 110030 India
It is the tallest minaret built up in 1192 with bricks. It is also a part of UNESCO World Heritage Site, situated in Mehrauli.

The area around is known as the Qutub complex.
Duration: 1 hour

Stop At: Swaminarayan Akshardham, Nh 24 Akshardham Setu, New Delhi 110092 India
It is the one of the biggest Hindu Temples.

It was constructed in 2005, but seems like it has been constructed for over a thousand years because of its architecture.
Duration: 1 hour

Stop At: Friday Mosque (Jama Masjid), 6 km North of Connaught Pl. across from Lal Qila, New Delhi India
It is one among the world's largest mosques.

It is situated in front of the royal residence 'Red Fort', in the midst of Chandni chowk.
Duration: 1 hour

Stop At: Chandni Chowk, Near Red Fort, New Delhi 110006 India
It is Asia's biggest and oldest market of 17th century and is a one stop for all necessary things.

It is known as chandni chowk as it is 'lit' all the time. Special flea bazars are situated here on sundays.
Duration: 1 hour

Pass By: India Gate, Rajpath Near Connaught Place New Delhi, New Delhi 110001 India
The 1921 'Tomb of the Unknown Soldier' has names of 13,300 Indian army servicemen carved on the wall who died during the First World War.

Pass By: Rashtrapati Bhavan, Rajpath, New Delhi 110004 India
It is an impressive 330 acres architecture of 1929, constructed by Sir Edwin Lutyens and Herbert Baker who are in fact responsible for constructing almost whole of the New Delhi.

No meals included on this day.
No accommodation included on this day.
Show More
Important Information
Departure Point
Traveler pickup is offered
Pick-up from anywhere in Jaipur
Drop-off to anywhere in Delhi NCR
Duration
4 days
Inclusions
Exclusions
Show More
Additional Info
Cancellation Policy
For a full refund, cancel at least 24 hours in advance of the start date of the experience.
1Review0Q&A

Write a review
Traveller rating
Traveller type
Time of year
Language
Selected filters
John M wrote a review 23 Feb.
14 contributions
+1
Delhi > Agra > Jaipur > Delhi
Keeper Landwey is highly recommended for accomplishing private “Golden Triangle” travel and touring at a very reasonable price. Our driver Vikram throughout was Vikram who is delightfully cheerful, considerate, punctual and has a surgeon’s skill to calmly navigate traffic…
Read more
Date of experience: February 2020
Helpful
Share
Response from KeeperLandwey, General Manager at Private Golden Triangle Tour 4 Days - Delhi, Agra and Jaipur from Jaipur
Responded 3 days ago
Dear Guest, Thank you for sharing the experience about your recent Tour. I am truly delighted to have read your appreciative comments and recommendation . It has been our pleasure to serve you and we want you to know that we truly value your continued relationship with us. Thank you for referring us. We look forward to welcoming you back to refreshing experience. Best regards!
Read more
Write a review
What was your experience like?
Write a review
Share your best travel photo
Let the world see your experience through your eyes.
Post a photo
Get quick answers
Ask fellow travellers and attraction managers your top questions.
Ask a question
About the operator

Vineeta234
10
Awsome and exciting experience in Agra
Thank you Maahin and Sarfaraz for very exciting and memory full trip in Agra. I really enjoyed the trip to Agra…
Read more

Farhana R
10
Helpful and respectful
Traveling with my mom through the Golden Triangle and enjoyed having Owais as our Taj Mahal tour guide. He gave…
Read more

637samirab
Switzerland
197
Jaipur customized Tour
Great tour of the major attractions in Jaipur. Avinash was a great guide that personalized our tour according to…
Read more

Kevin
10
Agra to Jaipur Tour
Uzer was a great tour guide! Very knowledgeable and took many pictures of us and of monuments for us. Helped us…
Read more

Alexsander77
3014
Informative and pleasant experience
The tour provided by Keeper Landway to the Taj Mahal from Jaipur was an amazing experience , their professional…
Read more