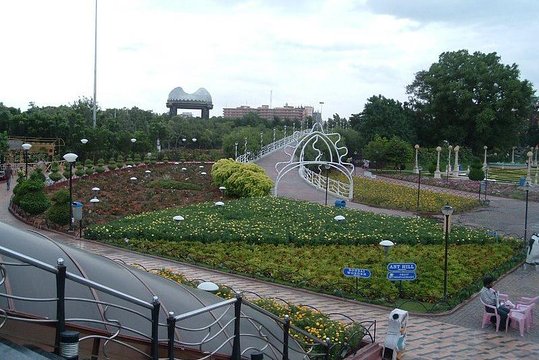 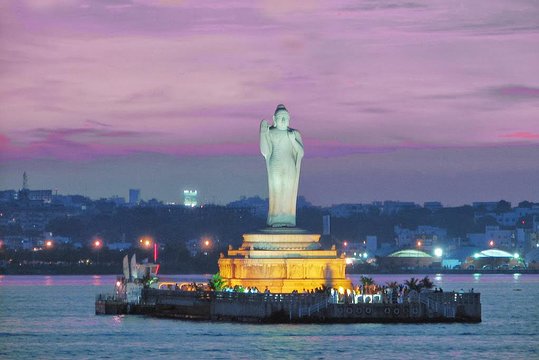 Select Date and Travellers
From
USD 98.98
Date
2 travellers
Options
Free Cancellation up to 7 days in advance
Low Price GuaranteeNo Booking Fees
Overview
Highlights
What to Expect
You will be picked up at your hotel in Hyderabad by 2:00 PM and start this exciting tour in the Pearl City of Hyderabad.

Later your local English-speaking guide will join you and start your tour with a visit to the Birla Temple that combines architecture of Orissan and South Indian temples devoted to Lord Venkateswara (Vishnu). The temple also has separate shrines for various Hindu gods and goddess including Shiva, Shakti, Ganesh, Hanuman, Brahma, Saraswati, Lakshmi and Saibaba.

Afterwards go to a famous long strip of boulevard popularly known as Necklace Road followed by the NTR Garden. NTR Garden is a leisure and entertainment centre located on the bank of Hussain Sagar, named after the late N. T. Rama Rao film star and former Chief Minister of Andhra Pradesh. It offers lots of recreation facilities, such as toy train, car cafes, Japanese garden, restaurants, roaring cascade, fountain, gopuram, and is also known for an imposing entrance plaza with Nandi Bulls.

After NTR garden enjoy a relaxing boat ride in Husain Sagar lake with scenic view of lake. Husain Sagar Lake is one of largest lake in Asia and connects two city - Hyderabd and Secundrabad. It was created on a stream of the River Musi by Sufi Saint Hussain Shah Wahi in 1562, during the rule of Ibrahim Quli Qutub Shah. You will also see the large Lord Buddha statue located in the centre of the .lake. After the boat ride, stop by the Lumbini Park nearby that is maintained by the Buddha Purnima Project Authority. The park was constructed in 1994 and occupies an area of 7.5 acres and is named after the garden as the birth place of Prince Siddhartha, who later became Lord Buddha. The park also contains a statue of Lord Buddha.

Write a review
Traveller rating
Traveller type
Time of year
Language
Selected filters
DEEPAK MEHTA wrote a review Feb. 2019
6 contributions1 helpful vote
WASTE OF TIME
lights required to be focused on the face with the body. boat does not take around the lake. waste of money and time and same for the laser show
Read more
Date of experience: February 2019
Helpful
Share
Uma Y wrote a review Feb. 2019
5 contributions2 helpful votes
Poor maintenance
No doubt the lake and the setting in beautiful, absoultely kept dirty. The sorroundings could be better maintained and littering in the lake can be avoided
Read more
Date of experience: December 2018
Helpful
Share
About the operator

By: My Flight Trip
101 reviews

EALITTLEJOHN81
2413
Lots of stairs
We arrived and the ocean was filled with trash - very sad. We walked off the boar on to the pier and saw cows and…
Read more

yummytummy1983
London, United Kingdom
4043
Different
I wasn’t sure what to expect however had an amazing time It is pure theatre and the crowd on our viewing side…
Read more

Harry H
Sydney, Australia
6355
Dance off - show off
What an amazing spectacle. It has all the drama of a serious world class contest but is light hearted and comical.…
Read more

Dennis R
Las Cruces, New Mexico
50
Don't miss this
It is a long ferry ride but the temple caves are amazing. A lot of walking some on broken ground. The temples were…
Read more

Michoco
30
Great facial art
The theatre was small. It was difficult to see from the seat behind the second row. Two actors were great. At…
Read more

Vasant S
8742
Boat Tour in Varanasi in river at Ganga Ghat
This is a unique experience. The boats start from one end and shows all the ghats well constructed by Maharajas.…
Read more

pareshraja14
Greater London, United Kingdom
609
Excellent Experience
Worth the experience to the see the border between India & Pakistan. The atmosphere is amazing and performance…
Read more

Slpneal
Concord, California
95
Perfect Tour
We couldn’t have asked for a better tour. We were able to customize the tour to suit our tastes and needs. Highly…
Read more