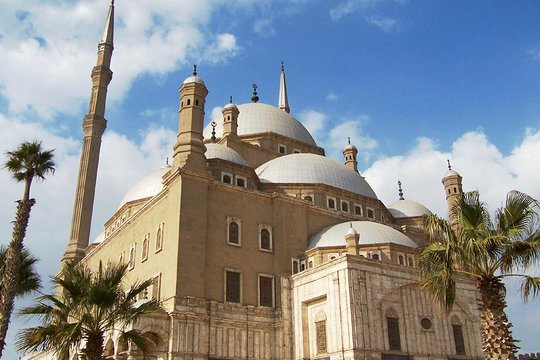 Once crossing into Egypt, from Taba Border our representative will await you, and aid you to the car which will take you to Cairo. We will start with the most famous sites in Cairo The Pyramids of Giza, including the famous Sphinx (the silent evidence for the great civilization but so expressive) as well as the Egyptian Museum. Overnight Cairo.

After breakfast at your hotel we drive to Sakkara, the ancient "Necropolis" of the Old Kingdom's Capital, Memphis, where we will visit a few pyramids and tombs, among them the known "Step Pyramid", the oldest known Pyramid. Then we drive to visit the Cairo Citadel built by Saladin, with its known "Alabaster Mosque". Overnight in Cairo.

Take a fascinating private tour to Alexandria from Cairo in the company of your own Egyptologist guide. The second largest city in Egypt, Alexandria has an atmosphere that is more Mediterranean than Middle Eastern and is famous for its Roman remains. With your own private Egyptologist guide to lead the way, you'll enjoy personalized attention on your private tour of Alexandria. As this is a private tour, you can determine the amount of time you'd like to spend at each of the sites you'll visit. Alexandria was founded by Alexander the Great in 312 B.C., and was the capital of Graeco-Roman Egypt. Your first stop in this historic city is the catacombs of Kom ash-Shuqqafa, a Roman burial site whose family tomb reveals the merging of Egyptian and Roman art and architecture. Descend below ground to visit the tomb and Caracalla Hall. Back above ground, continue to Pompey's Pillar, an 82-foot (25-meter) granite column built to honor Emperor Diocletian, who freed the besieged city and brought food to its starving people. Continuing the Roman theme, the next site your guide will show you is the Roman amphitheater, possibly the best preserved Roman site in Egypt. The site also includes the remains of a Roman street and homes. After lunch you will visit the famous Alexandria Library. In contrast to the ancient architecture found throughout Egypt, the Norwegian-designed building is a striking piece of modern design. A copy of every book published in the world is kept in the library, making it one of the great literary sites in the world. The library also houses several exhibitions relating to the history of Egypt and a display of rare antique books.

Today is dedicated to the Old City of Cairo (Fostat) where we will visit the old Coptic Churches and some of the most famous Mosques, characteristic to this area The second part of the day you will spend at leisure to stroll on your own through the famous market-area of Khan el Khalili. In the early afternoon we will pick you up and drive you to the Taba Border Crossing.
Show More
Important Information
Departure Point
Taba board gate (Egypt side)
Departure Time
9am
Duration
4 days
Return Details
Tour returns to original point of departure
Inclusions
Exclusions
Show More
Additional Info
Cancellation Policy
For a full refund, cancel at least 24 hours in advance of the start date of the experience.

jeff-australia1
21
Happy wife and daughter - happy life!
My wife has always wanted to travel to Egypt and my daughter is studying archaeology at Sydney Uni so a trip for…
Read more

dturaga
Houston, Texas
10
Private tour of Egypt
We had a wonderful trip to Egypt thanks to Your Egypt Tours. They accompanied us non-arabic speaking couple…
Read more

Rosemarie P
20
Amazing adventure
Your Egypt Tours , gave my 21 year old daughter and myself a trip never to forget . They insured everything ran…
Read more

Nathan R
915
Egypt: Grand and challenging
We had grand plans to see everything and go everywhere in Egypt, on paper at least. "Your Egypt Tours" put all of…
Read more

jjswa
Bellevue, Washington
10
A Trip of a Lifetime - April 2019
Your Egypt Tours provided my family a wonderful experience in Egypt. We were there the first week of April and it…
Read more

Burcottbabe
9580
Exceptional service
I would not hesitate to recommend Your Egypt Tours. Every aspect of our complicated trip was faultless.
Read more

halo_NYC
San Diego, California
7537
Awesome tour company!! Highly recommend!
Traveled to Egypt with Your Egypt Tours and was blown away by the experience. I had so many requests of things to…
Read more