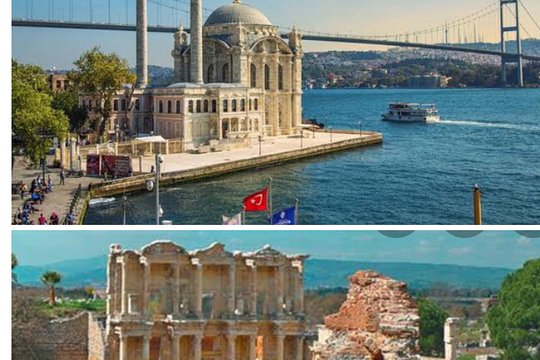 Stop At: Topkapi Palace, Cankurtaran Mahallesi Gulhane Park, Near Sultanahmet Square, Istanbul 34122 Turkey
Topkapi Palace, was not only the residence of the Ottoman sultans, but also the administrative and educational center of the state. It was constructed between 1460 and 1478 by Sultan Mehmed II, the conqueror of Constantinople. We will visit the Topkapi Palace including treasury ,Chinese Porcelain, weapons section.
Duration: 1 hour 30 minutes

Stop At: KapalI CarsI, Beyazıt Mahallesi, Istanbul 34126 Turkey
Grand Bazaar where is one of the largest and oldest covered markets in the world, with more than 58 covered streets and over 1,200 shops which attract between 250,000 and 400,000 visitors daily. Opened in 1461, it is well known for its jewelry, pottery, spice, and carpet shops.

Stop At: Ancient City of Ephesus, Selcuk 35920 Turkey
Ephesus that is one of the best well-kept Greco- Roman ancient city in the world, famous with Odeon where the music concerts were given; Domitian Temple which is one of the first temple dedicated for a human; Celcius Library which was the third biggest library in the ancient time; Amphitheatre where is one of the biggest amphitheatre in the world with 24.000 people capacity and St. Paul preached; Roman Baths ; Fountains; Temples; Agora; Love House; Public Toilets.
Duration: 2 hours

Stop At: The Temple of Artemis, Ataturk, Park Ici Yolu No:12, Selcuk Turkey
One of the seven wonders of the ancient world
Duration: 10 minutes

No meals included on this day.
No accommodation included on this day.
Show More
Important Information
Departure Point
Traveler pickup is offered
We highly recommend you to meet at port after 30 / 45 minutes your ship docked to port in order beat crowds / school buses and hot weather in the afternoon. It is better to meet early to have a better tour in Ephesus before the crowds.

THIS TOUR IS ONLY FOR CRUISE GUESTS. IF YOU ARE NOT FROM A CRUISE SHIP, PLEASE DO NOT BOOK THIS TOUR 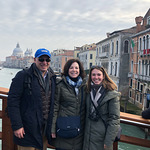 JeffBigD
Dallas, Texas
41
Awesome private tour
We were picked up at our hotel and had a full day private tour that was incredible. Our tour guide was Borak and…
Read more

heidis881
Santa Barbara, United States
42
Ms.
This tour was amazing due to our excellent tour guide - Izak! From the moment we met in our hotel lobby, we felt…
Read more

EricF42
London, United Kingdom
208
Seemless pick up, excellent guide and driver, definitely worth it
We were traveling by cruise ship. The ship's excursion did not cover everything we wanted to see. So, we organised…
Read more

AAAAAAAAAAAAAAAAAAHH
10
Amazing day and experience
The guide was very knowledgable and did not make it stressful. We were able to do our own things and learn about…
Read more

948stephent
20
Excellent Tour
We had a great tour. The guide and driver picked us up from our private residence in Kuşadası and drove us to…
Read more

M2822DFcharlesm
21
Great tour with Great tour leader - Erkan.
It started out with the tour company and Ekran meeting us as we disembarked from the cruise ship. We were able to…
Read more

elizabethp581
Kelowna, Canada
51
Excellent Tour!
We had an excellent day trip to Ephesus! Our van and driver were great. Our guide was extremely knowledgeable,…
Read more

zealaghaim
10
best tour guide for ephesus
Burak was our tour guide for our short visit at the western part of turkey. We went to Pamukale and Ephesus ! We…
Read more

ChrisHalim
Singapore
20
Private tour from EPHESUS PORT TOURS
Amazing 1 day tour experience with Burak. He was able to curate a special trip to cover both Pamukkale and Ephesus…
Read more