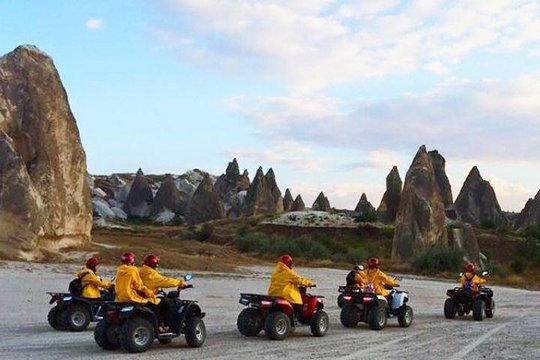 Stop At: Kizilcukur, Dereler, 50400 Ürgüp/Nevşehir, Turkey
Kızılcukur is a valley called Rose Valley as well because of the red colors of the rocks. This is one of the best valleys for hiking in the area even for 4 km. Kızılcukur was also used by Christians at the 5th century, so you will explore tge cave dwellings and old churches. The colors also change up according to the daylight. It is the best place to see sunset.
Duration: 1 hour

Stop At: Cavusin, Cavusin, Cappadocia
Cavusin this village is one of the ancient settlement in the early period of the Christians having the oldest church of region dating back to 3rd century. It was exactly settled like a big town where you see lots of the cave rooms used as living rooms, sleeping rooms, kitchens, wineries, etc. All these are waiting for you to explore where cave houses collapsed because of landslide in 1960 which has a gorgeous view.
Duration: 1 hour

Stop At: Kaymakli Underground City, Derinkuyu Turkey
Underground City this underground city is the most interesting one in the regions among 36 other ones which were first used by Hittites and later by Christians like a shelter in during Roman persecution times. By carving lots of rooms all connected with tunnels, they lived in here when the cities were invaded by enemies. You have a chance to see the rooms, food storages church and kitchens. Chimneys and defence systems used in the underground city will surprise you during the visit.
Duration: 2 hours

Stop At: Pigeon Valley, Uchisar KasabasI Nevşehir Kapadokya, Goreme 50240 Turkey
Pigeon Valley is a panoramic view point where you will see the pigeaons and pigeon houses which were used tp keep pigeons in order to collect their dropping for fertilising the earth especially wineyards.
Duration: 30 minutes

Stop At: Uchisar Castle, Uchisar Turkey
Uchisar Castle is the highest point in the region. The castle and surrounds used to be the most populated area this settlement to survery the enemies. The top of the citadel provides a magnificent panorama of the surrounding area.

Day 2: Northern Cappadocia day tour and flight back to Istanbul and transfer to hotel

Stop At: Goreme panorama, Uchisar Yolu uzeri 1.km, Goreme 50180 Turkey
Goreme Panorama is a panoramic point where you can see a wonderful view over Goreme town with its spectacular cave houses.
Duration: 30 minutes

Stop At: Goreme National Park, Goreme 50180 Turkey
Goreme Open Air Museum is the first and biggest monastery where this religious education was started. You will visit the churches, chapels and monasteries carved into the fairy chimneys with frescoes painted on the walls from 10th to 13th Centuries. In the 4th century three important men created a new unity here they are the Great St. Basil, bishop of Kayseri, his brother St. Gregory of Nyssa and St. George of Nazianus.
Duration: 2 hours

Stop At: Avanos, Avanos, Cappadocia
Avanos is known for the pottery a craft dating back to the Hittite period. The red clay which is worked by local craftsmen comes from the residue in the Kizilirmak river. The Kizilirmak, which divides Avanos into, is the longest river of Turkey.
Duration: 1 hour

Stop At: Devrent Valley, Devrent Mevkii No:1 Aktepe Koyu Turkey
Devrent Valley has various types of fairy chimneys. Among these are those with caps, cones mushroom like forms pillar and pointed rocks. With the action of smaller, secondary volcanoes and the action of rivers, wind and flood waters, this layer of tuff has slowly but steadily been eroded to produce the rock formations know as “fairy chimneys”. We will take a walk through this amazing valley.
Duration: 1 hour

Stop At: Pasabag, Urgup Turkey
Pasabagları (Monks Valley) Many fairy chimneys with multiple stems and caps can be found here, this style being unique to this area. A chapel dedicated to St. Simeon and a hermit’s shelter is built into one such fairy chimney with three heads.
Duration: 1 hour

Stop At: Urgup, Urgup, Cappadocia
Three Beauties has a beautiful view over Urgup town, famous with wine factories, and vineyards with apricot gardens give you memorable shots forever.
Duration: 30 minutes

Write a review
Traveller rating
Traveller type
Time of year
Language
Selected filters
No results found. Try removing a filter, changing your search, or to read reviews.
About the operator

lauraahmad
Chicago, Illinois
12
Inspiring services
We had a great tour of our life. The most prominent thing I want to mention was the behavior of the guiding team.…
Read more

maryyoung05
Amsterdam, The Netherlands
11
A colorful holiday
We reached Turkey Trips specialists for their services and they made us free from all conventions and organized…
Read more

william2hong
Toronto, Canada
22
4 Days on Tour
I appreciate the services that Turkey Trips offers. I loved Pamukkale's beauty as it was intended to be. This is…
Read more mubashirahmad14
Montreal, Canada
113
Wonderful Tour
I and my wife had only one week in Turkey and I wanted to see as much of the country as I could. Luckily, I found…
Read more

sam_nada34
New York City, New York
43
4 Unforgettable Days In Turkey
Wow! Just had a great time in Turkey. After a few days in Istanbul, I booked a 4 day tour around all the places I…
Read more

Psamual
Chicago, Illinois
13
6 Days in Turkey
Wow. It was amazing. They booked perfect services for us. The hotels was very nice. We loved our stay in Turkey.…
Read more

399aissab
11
My wife loved it so it is a top notche
Everything went smoothly agents (Mr erkan, Mrs ikeam..) were friendly and made our lives easy the diversity of…
Read more

hakimgr
11
Amazing trip love it
went with my friend and had an amazing trip, Thanks to Ikram who was very nice to us and answerd all of our…
Read more

benabdelouedm
11
Our best moment ever
we have bought a trip from this agency , and we definitely had the most amazing holiday ever , they understood…
Read more

bryanxgfd54
New York City, New York
11
Amazing Experience
We bought this trip from their office. we must have to say that they are very gentle persons. Mr. erkan was very…
Read more

275mubashira
London, United Kingdom
11
Gorgeous 🌹♥️
I have recently booked this trip from this agency. I must say that they have provided excellent services. Mr.…
Read more

Ik M
11
Amazing experience
I had a warm welcoming from Mr.Erkan i'll never forget his help and sense of consideration that should not be…
Read more